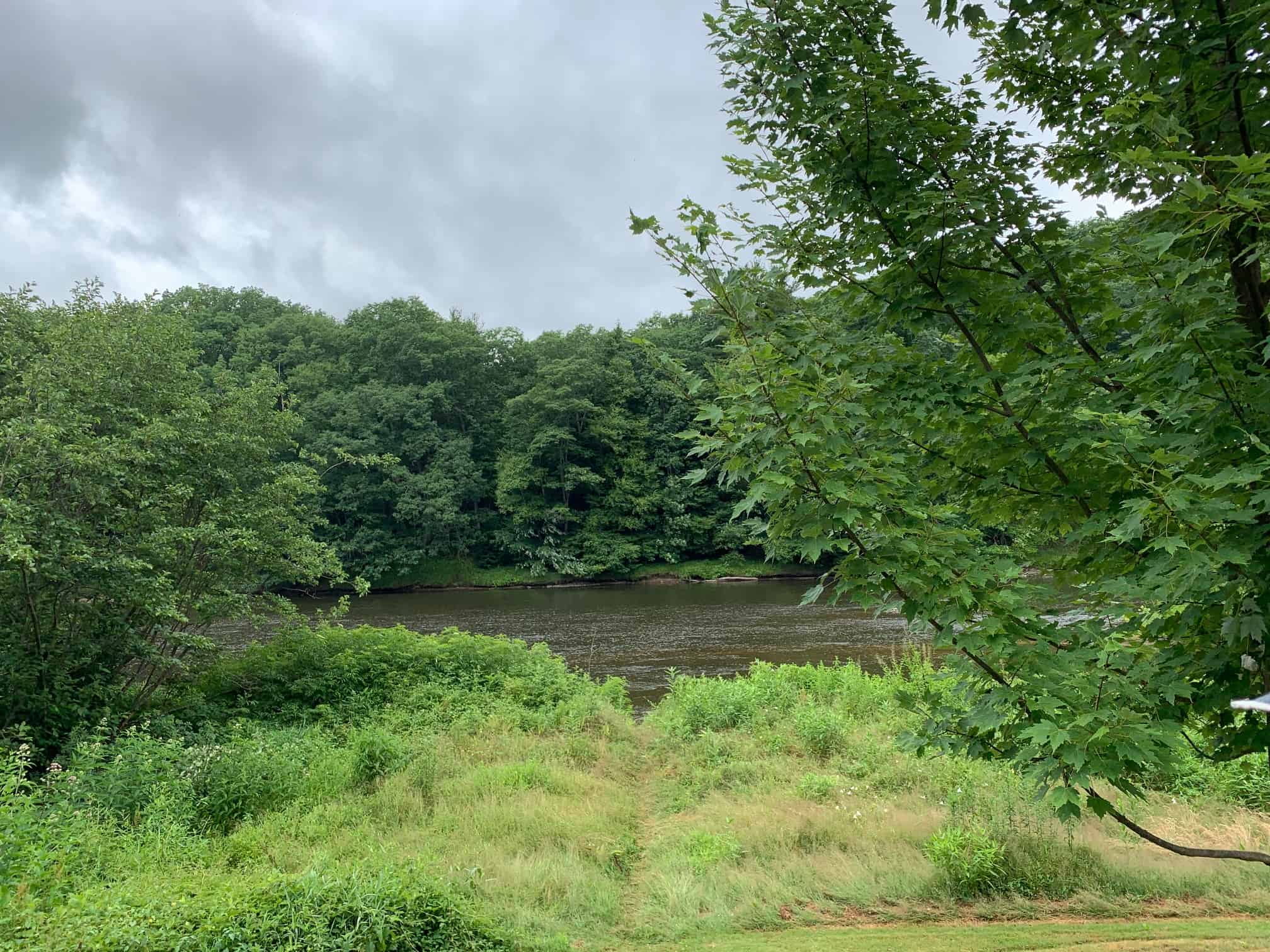 Clear Creek State Park features a scenic campground with sites right along the Clarion River – perfect for canoe, kayak, and inflatable launches – as well as trails to hike and space for your kids to ride bikes.

After serving as a lumber source and through-way in the mid- to late-1800s, the property was eventually sold to the state in the early 1900s. The Civilian Conservation Corps, founded by President Roosevelt to put thousands to work on environmental projects during the Great Depression, moved in to plant trees and build the roads, trails, and amenities visitors still enjoy today.

The park is located along (surprise!) Clear Creek itself and the Clarion River, which was named Pennsylvania’s River of the Year in 2019 and is a part of the National Wild and Scenic Rivers System.

The System was “created by Congress in 1968 (Public Law 90-542; 16 U.S.C. 1271 et seq.) to preserve certain rivers with outstanding natural, cultural, and recreational values in a free-flowing condition for the enjoyment of present and future generations.” You can learn more about all 226 designated rivers here.

At Clear Creek State Park, all of the waters run shallow. It’s not uncommon to see people getting out of their canoes, kayaks, or inflatables in the middle of the river to wade in knee-deep (or less) water.

Clear Creek State Park Campground consists of 53 total sites, 40 of which have electric and 23 that are pet-friendly.

In addition, 15 of the sites sit right along the river, with views like this out your back window: 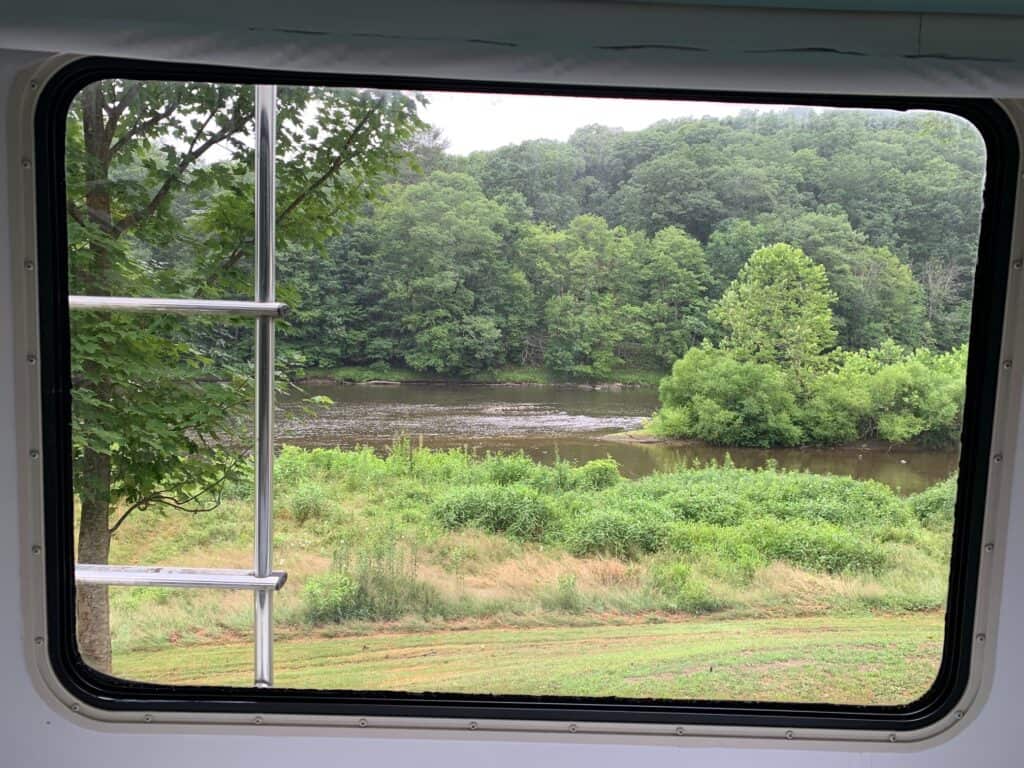 This campground has a nice energy. I don’t know how else to describe it. Just a positive, relaxed vibe.

We stayed at Site #38, which has a little trail to a step-down into the river. Aside from the easy river access, the site is a decent size, and you won’t feel too close to your neighbors. Site #39 also looks pretty agreeable, too.

You can see the entire campground map here.

The bathroom and shower facilities in our loop were clean during our stay.

While the water is hot and the shower strength is strong, there is still a pesky timer button that limits the spray to ONLY 15 SECONDS!

How unreasonable is that?!

If you are staying in the pet loop and want a better, less button-pushing shower, just plan for a longer walk to the shower houses on either the right or left past the next loop down! Neither of those have timer buttons.

The Campground has wide, paved roads throughout, which are perfect for biking and carrying inflatables to the river. For every family we saw biking in the Campground, we saw another blowing up giant swans or tubes!

Clear Creek State Park has about 25 miles of trails, and 23 of those are 2 miles or less. The trails present a variety of ways to create loops for your hike.

In this trail map snippet, the Campground can be found on the left side, and you can see many of the trails wind around the creek.

You can see the whole park trail map here.

We had a very wet hiking day from the start with bursts of monsooning rain, so we decided to take Clear Creek Trail from the Campground across the park to stay under the forest canopy as much as possible.

Clear Creek Trail has a few dips and turns, but it is mainly a well-traveled, root-and-rock-filled path. You’ll get to see some gorgeous mossy areas and small rock outcrops along this trail. 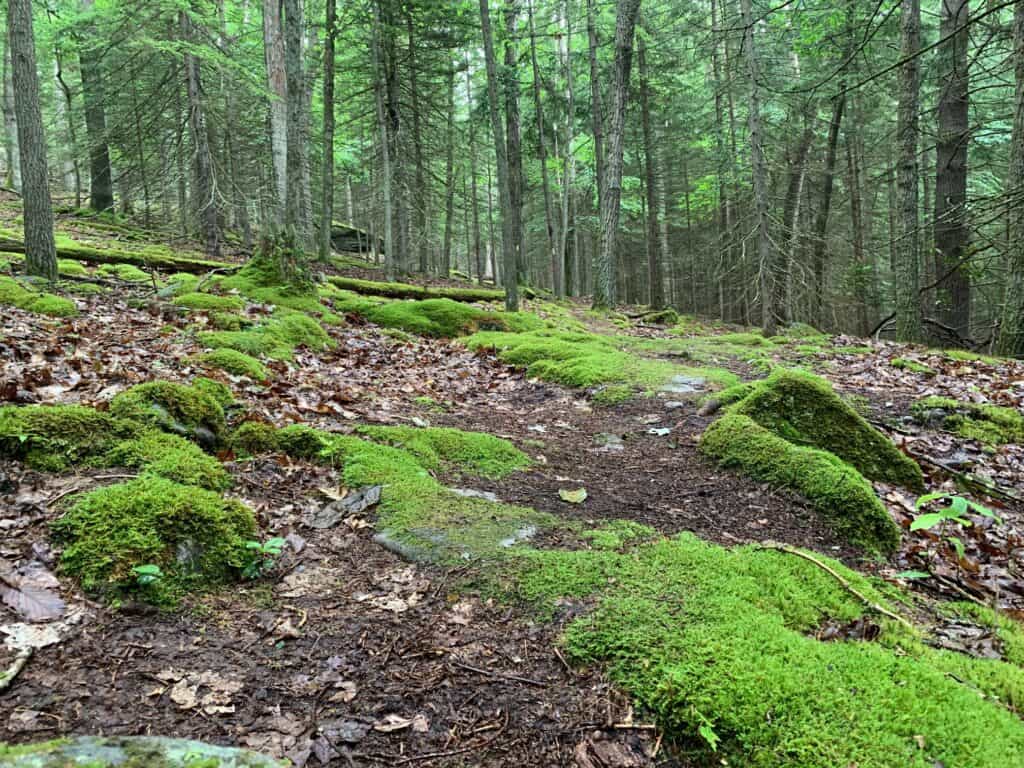 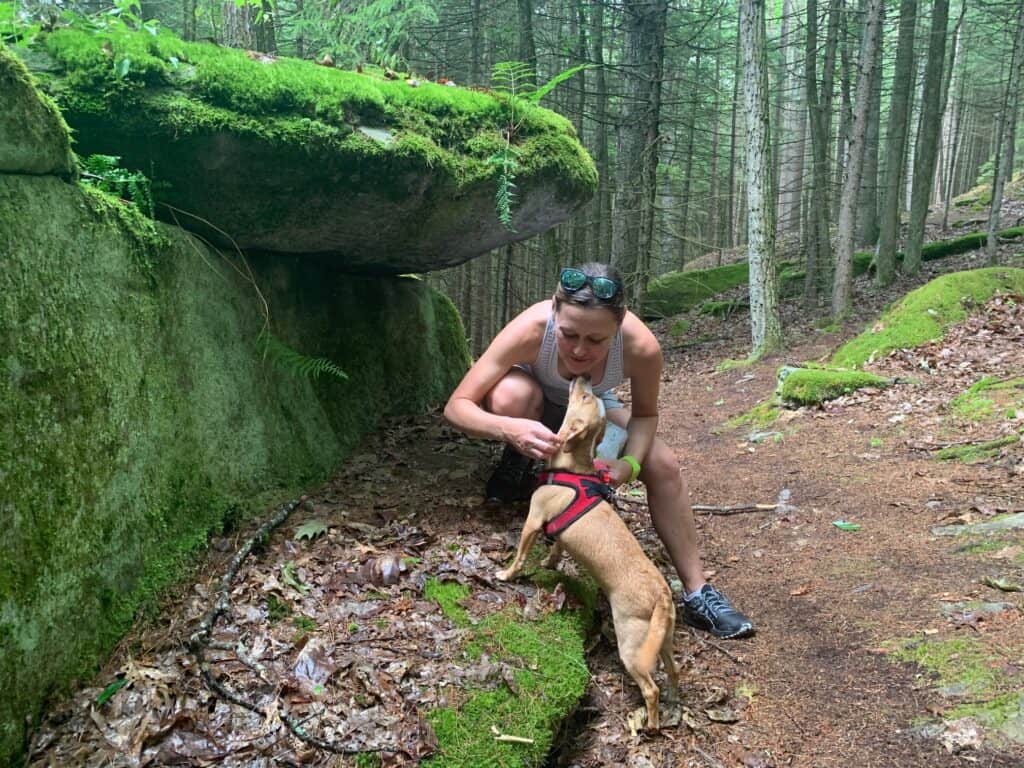 Because it was so wet, we had a chance to try out our backpack ponchos about halfway along the trail. 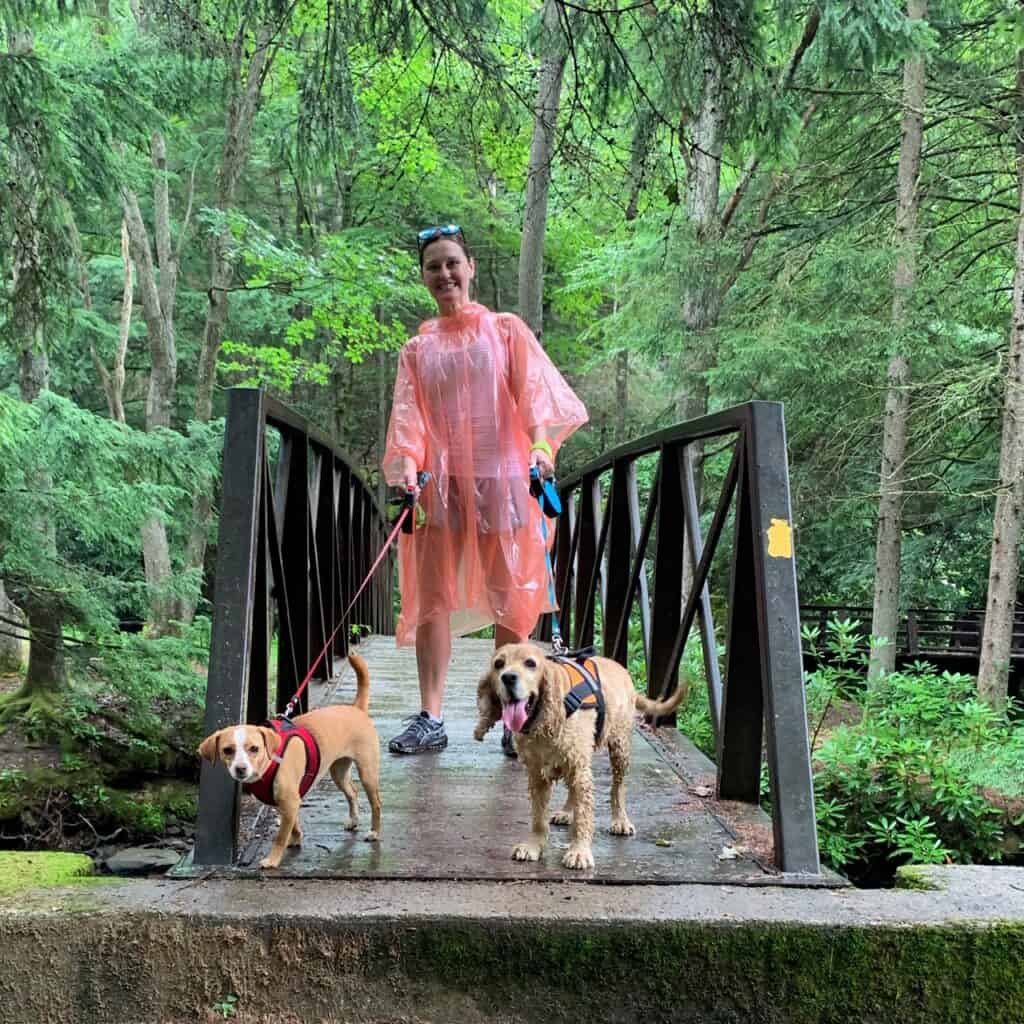 If your dogs like the water, they’ll enjoy shallow and cold Clear Creek. This trail runs along and intersects with it a few times, and Franklin & Hazel always stopped for a quick dip.

Towards the end of Clear Creek Trail, there are a few other trails you can branch off onto: Big Coon, Ridge, and Phyllis Run.

To create a loop, we chose to take Phyllis Run over to Phyllis Loop and return to the Campground on Radcliffe and the Park Road. 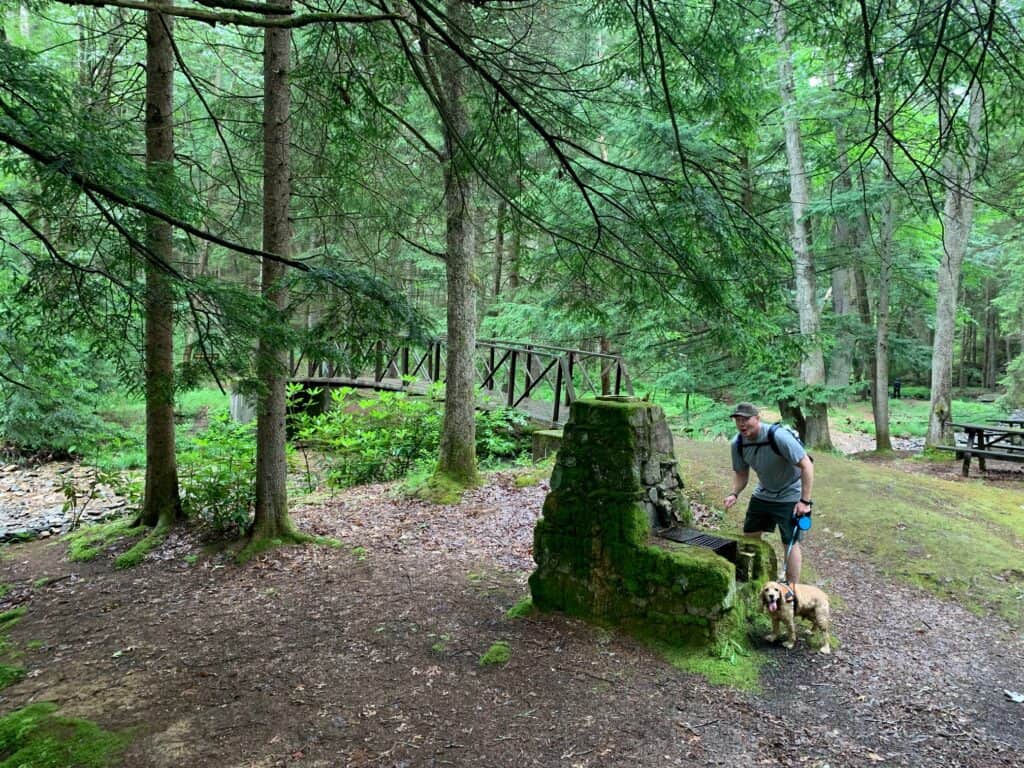 As for wildlife, we saw a few deer and a snail, plus we had a selfie contest with an unsuspecting red efft. 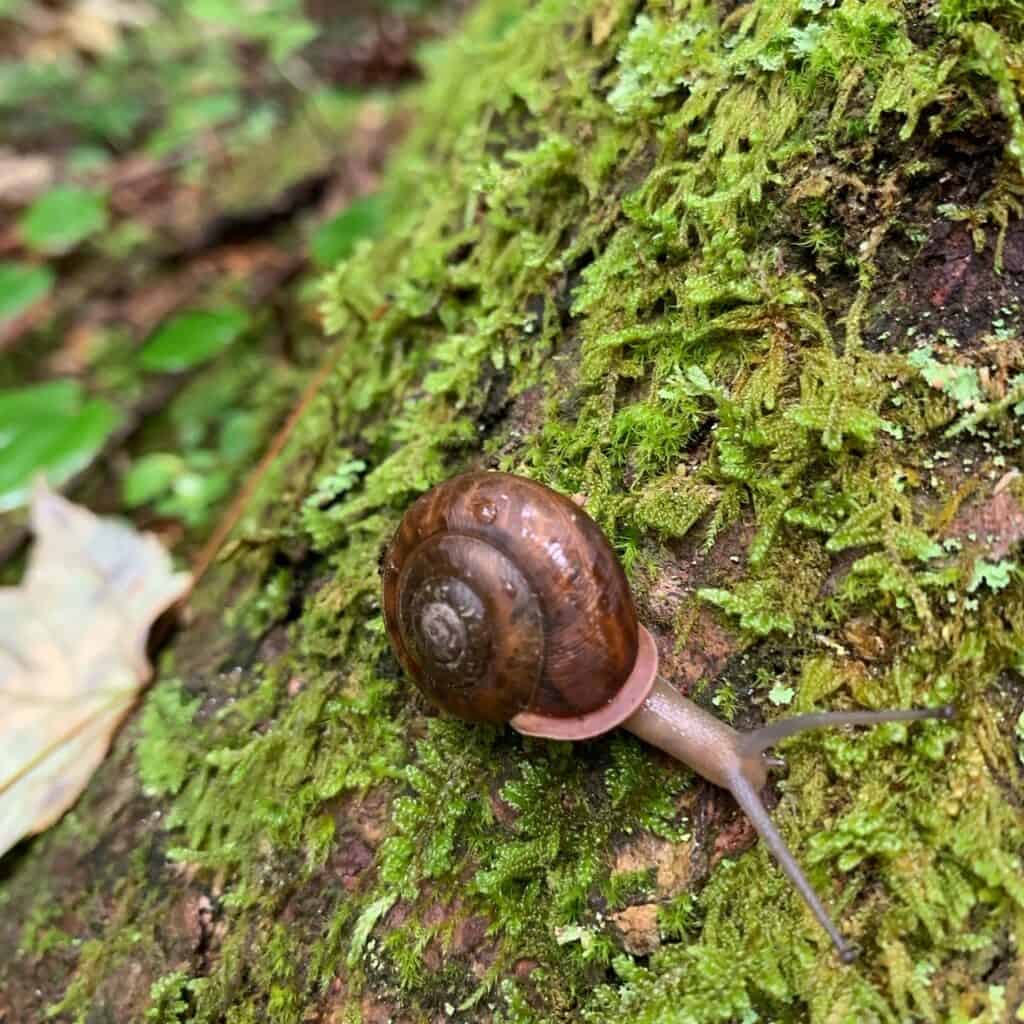 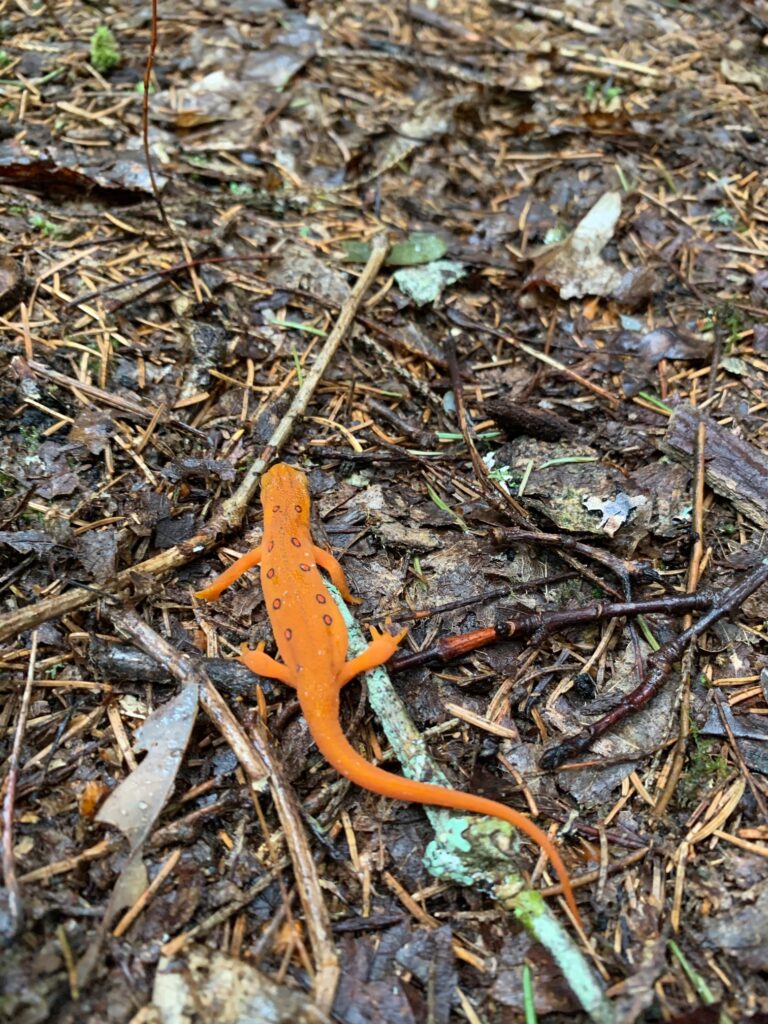 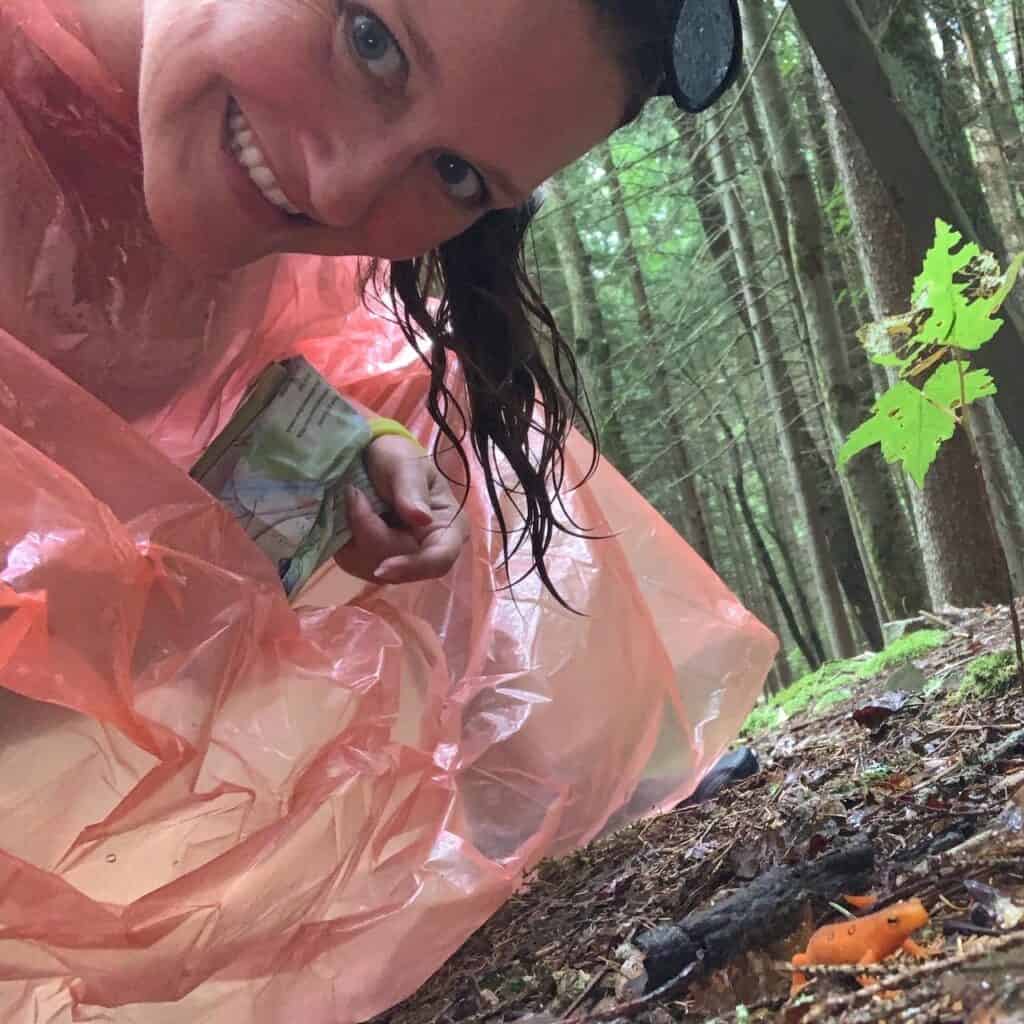 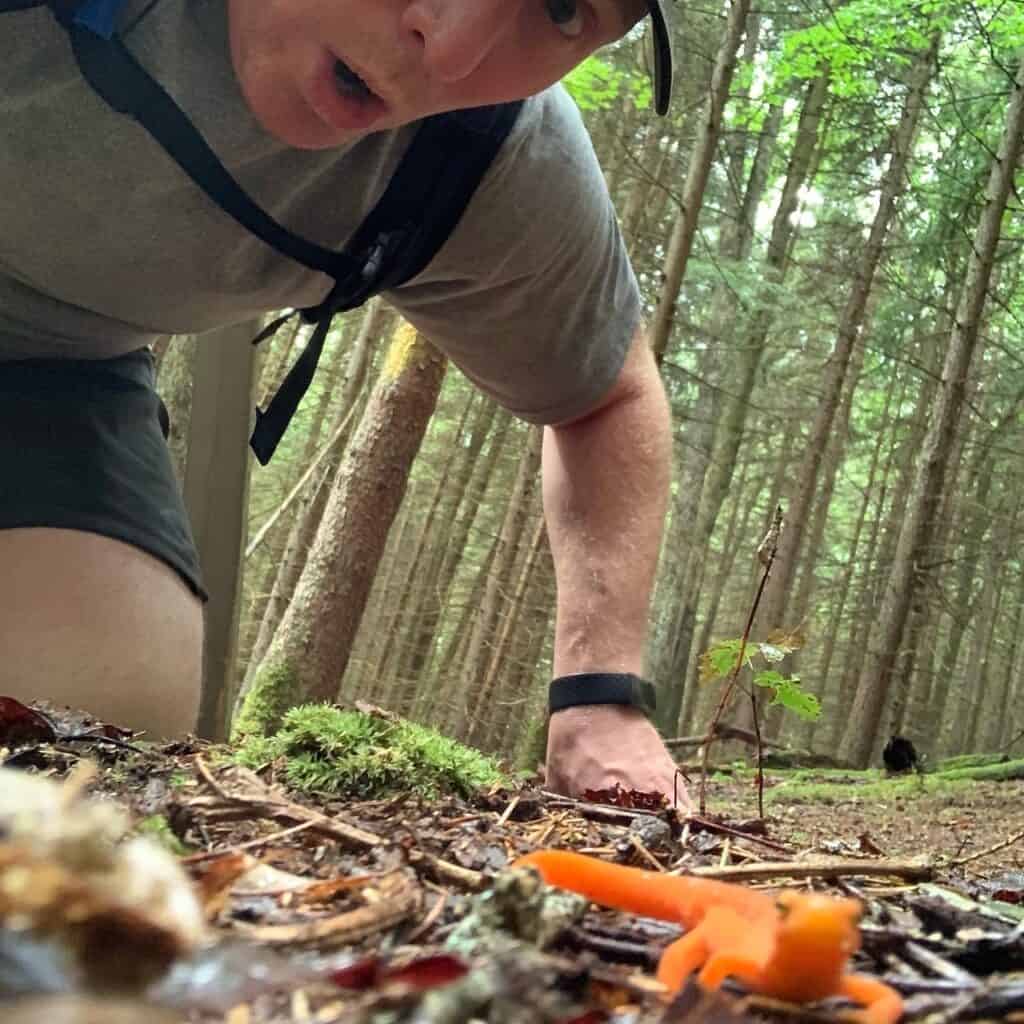 Towards the end of the hike, we saw a garter snake, too! 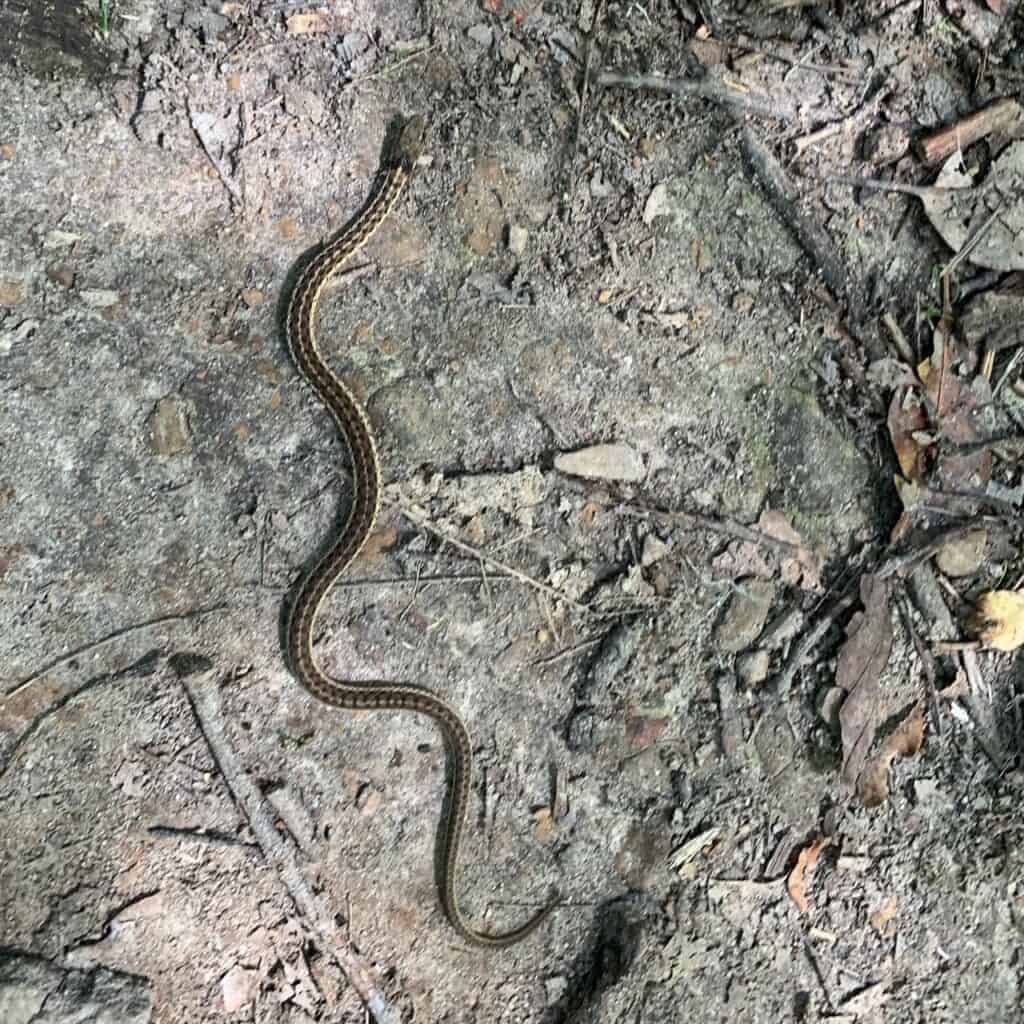 Despite seeing a lot of snakes during past few RV travel seasons (like here and here), this year has been fairly snakeless for us.

I’m curious if other hikers are seeing more or less wildlife this year? Let us know in the comments if you have a second. We seem to be seeing a little less, and I wonder if it’s because more people are opting outside since the pandemic began. 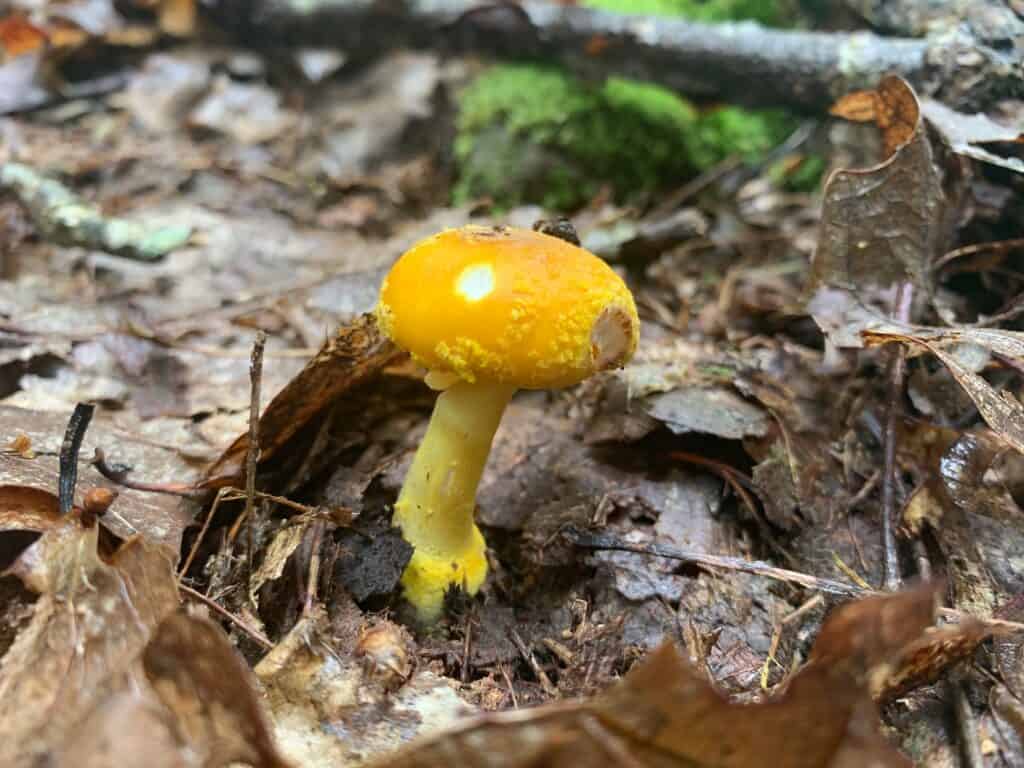 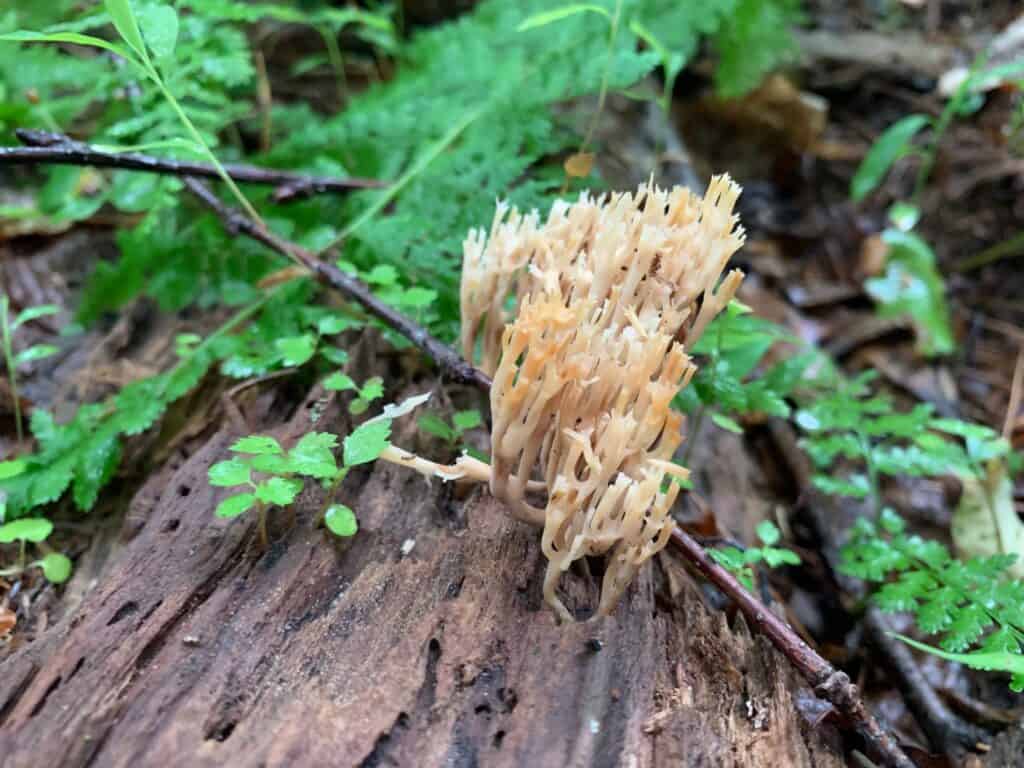 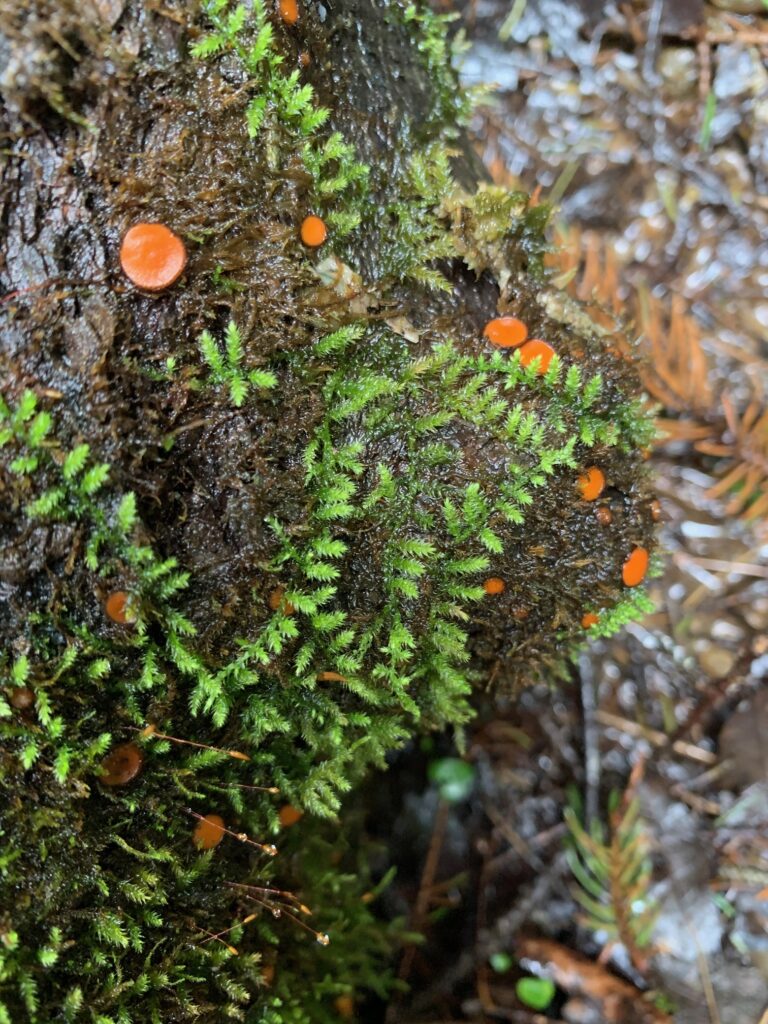 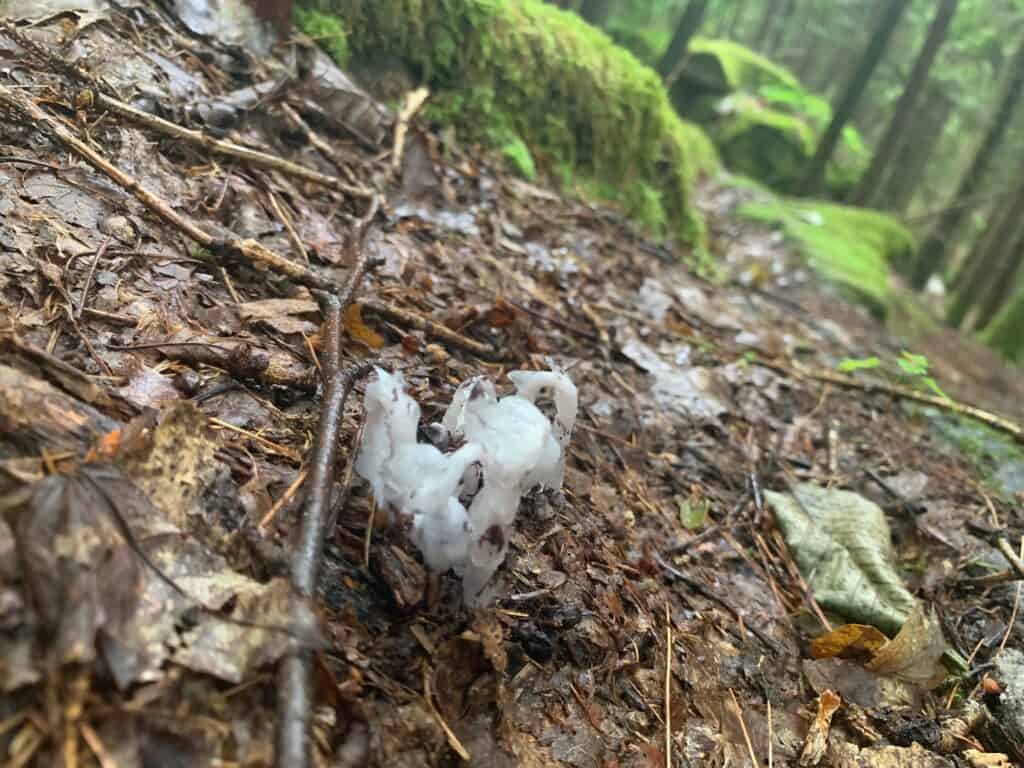 PRO TIP for the Trail

You’ll encounter a lot of history at Clear Creek State Park! Make sure to take Ox Shoe Trail for guided walk through the logging history of the area, and be on alert for other historical markers throughout the park.

Along the Camp Road back to the Campground, you’ll find a few interesting displays and signs, as well as the Nature Center – which was unfortunately closed during our stay. 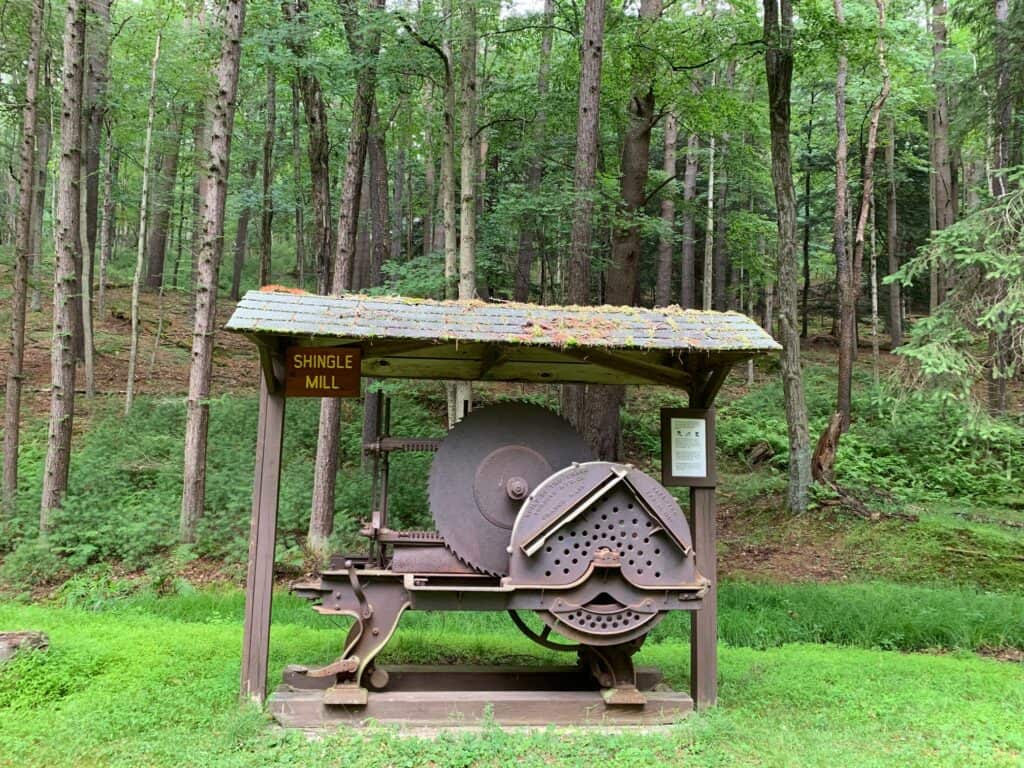 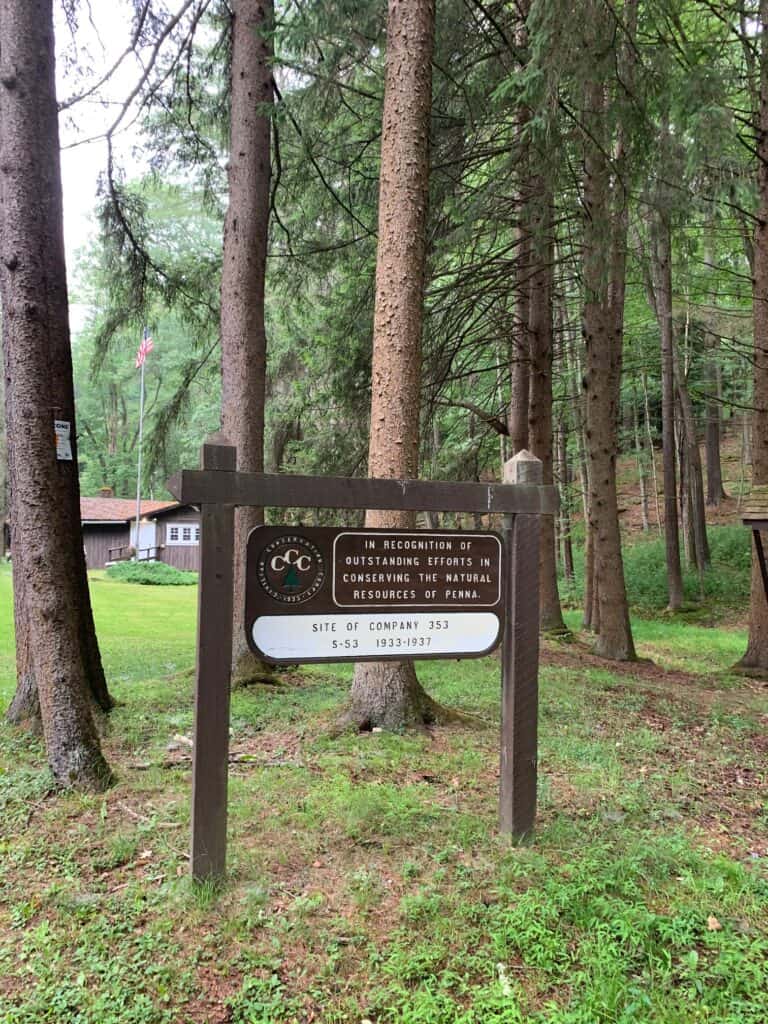 The giant hornet’s nest near the Civilian Conservation Corp stone let us see plenty of nature, though! 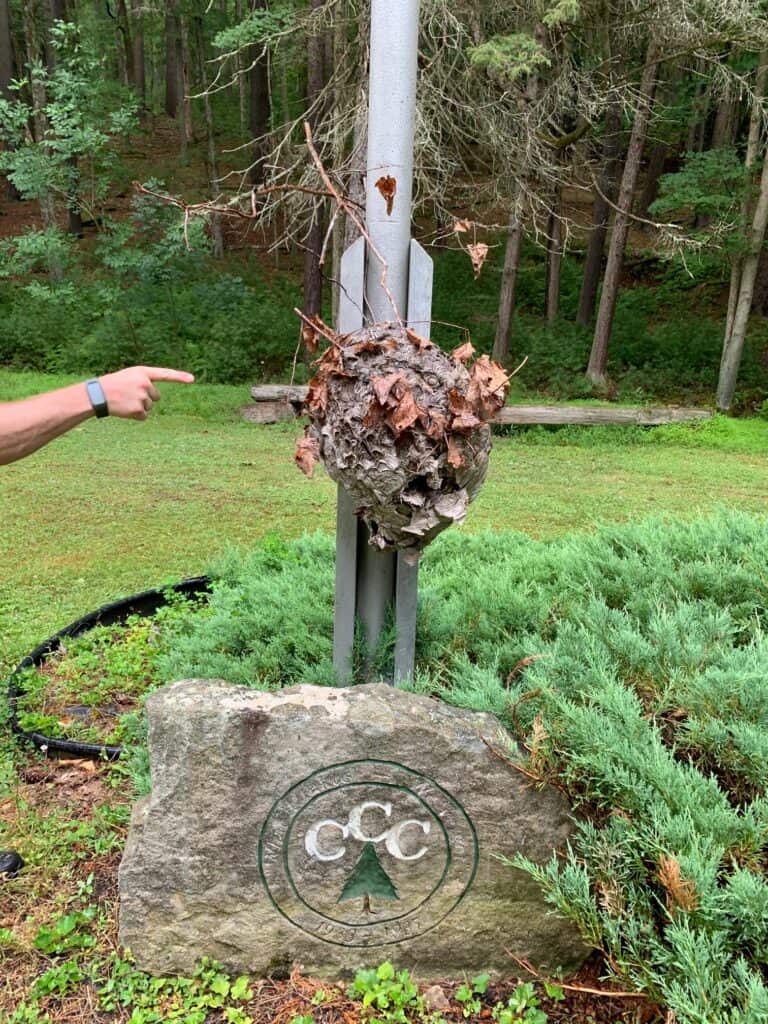 When you return to the Campground, this loop will have covered about 3 1/2 to 4 miles. You could probably cover a few more trails and miles without a hiking-in-a-monsoon kind of day though!

Hazel and Franklin spent some time drying off and napping afterwards. If you have dogs, an elevated mesh dog bed that allows the air to circulate is highly recommended for hot hiking & wet swimming days! 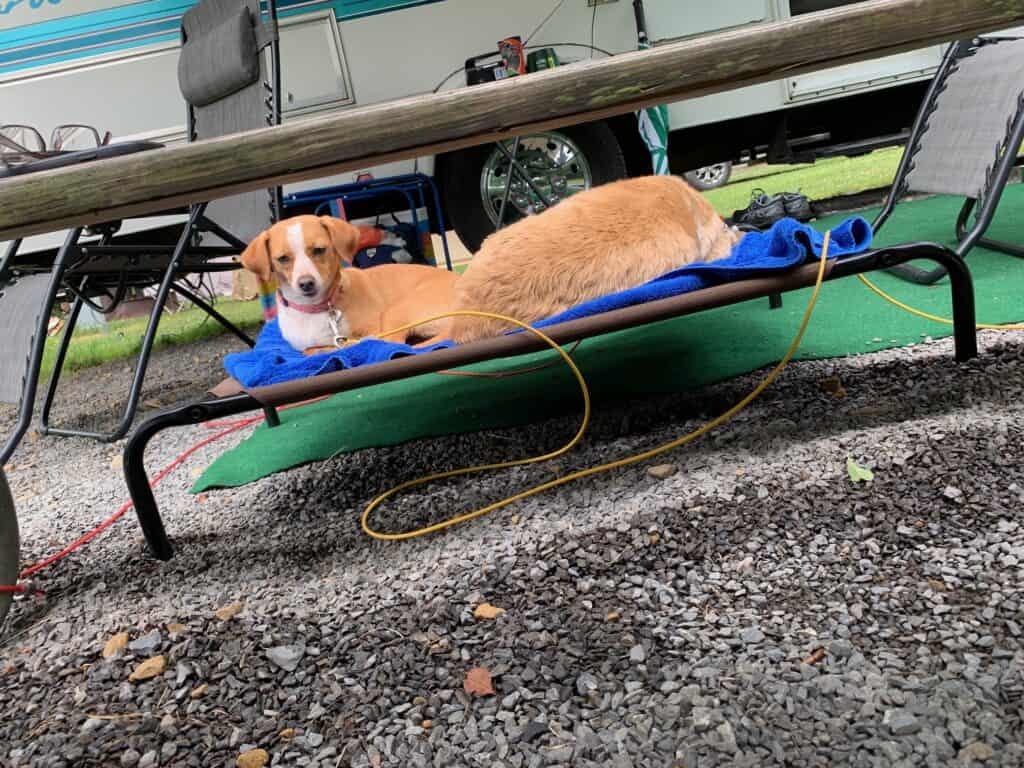 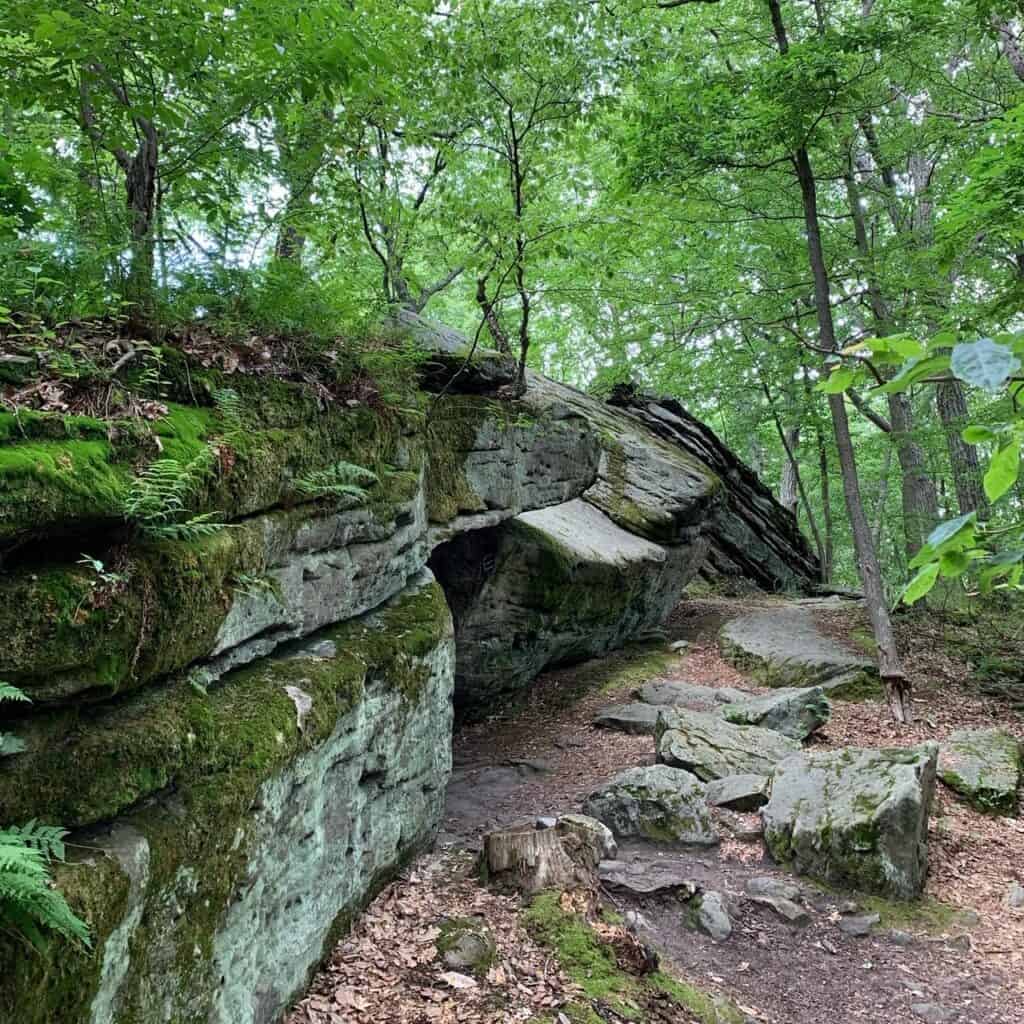 Just a few miles from the park, make a plan to visit Beartown Rocks.

In better weather, you could easily hike there from the park or campground, but after getting drenched on Saturday, we decided to park closer on Sunday!

The parking lot at Beartown Rocks is at the end of a long, stony, uphill road, but there’s plenty of room to park a small to medium-sized RV. 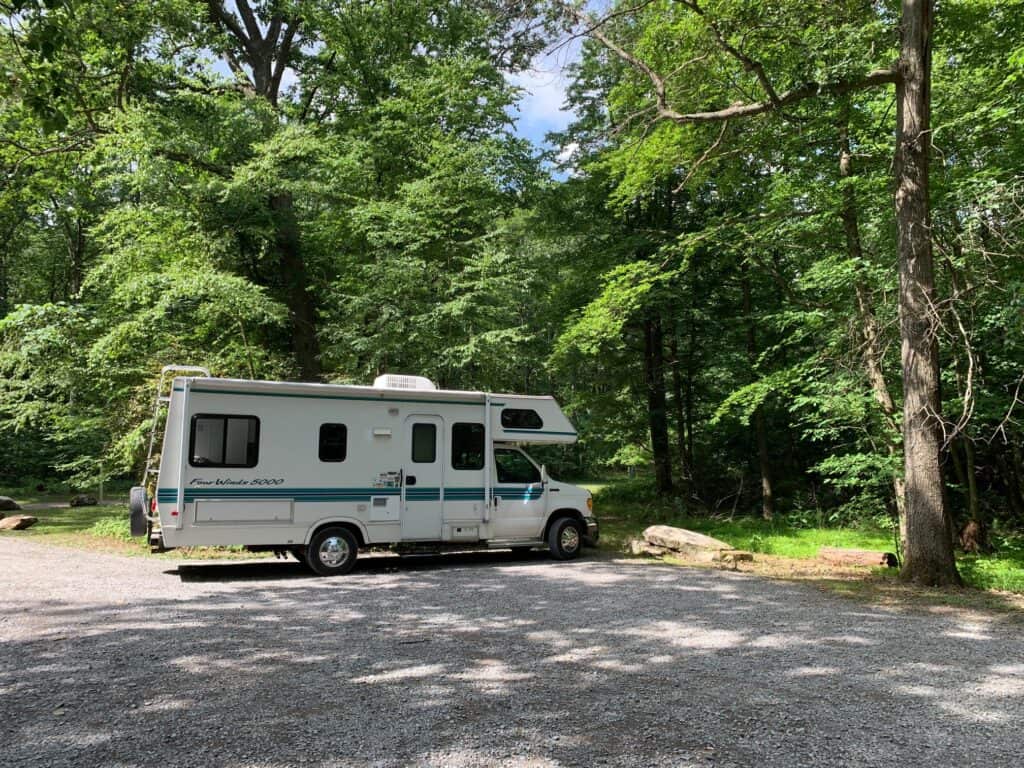 Once you arrive, you can make your way to the scenic overlook, plus explore in, out, around, and over the amazing boulders that were created by glaciers long ago. 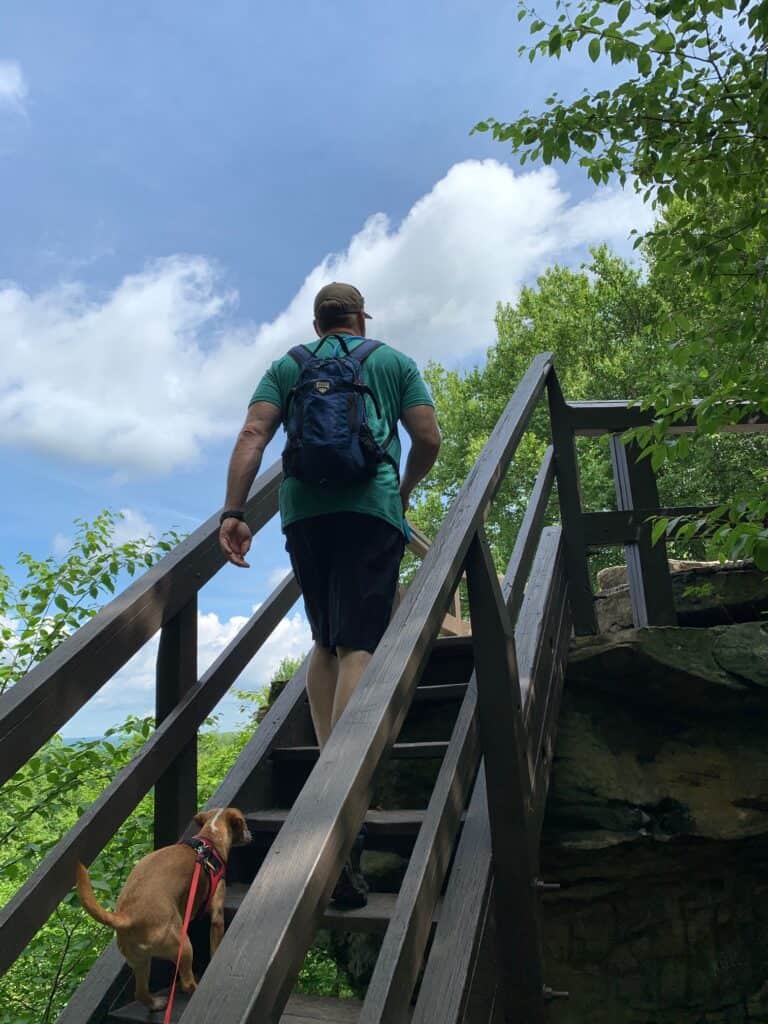 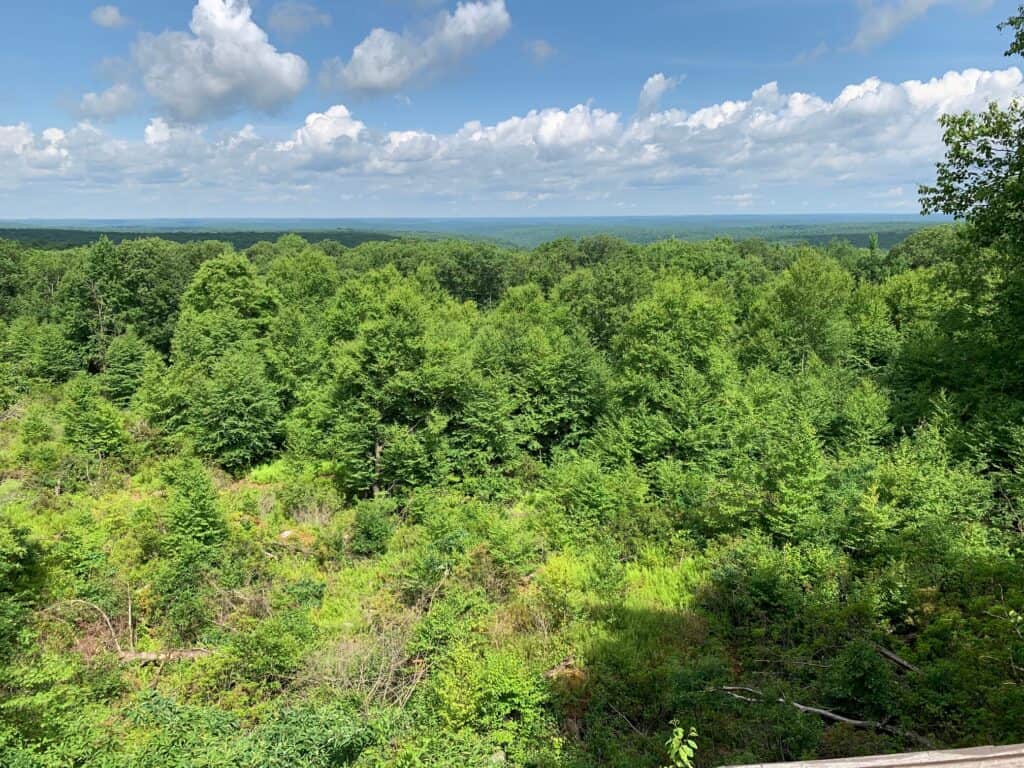 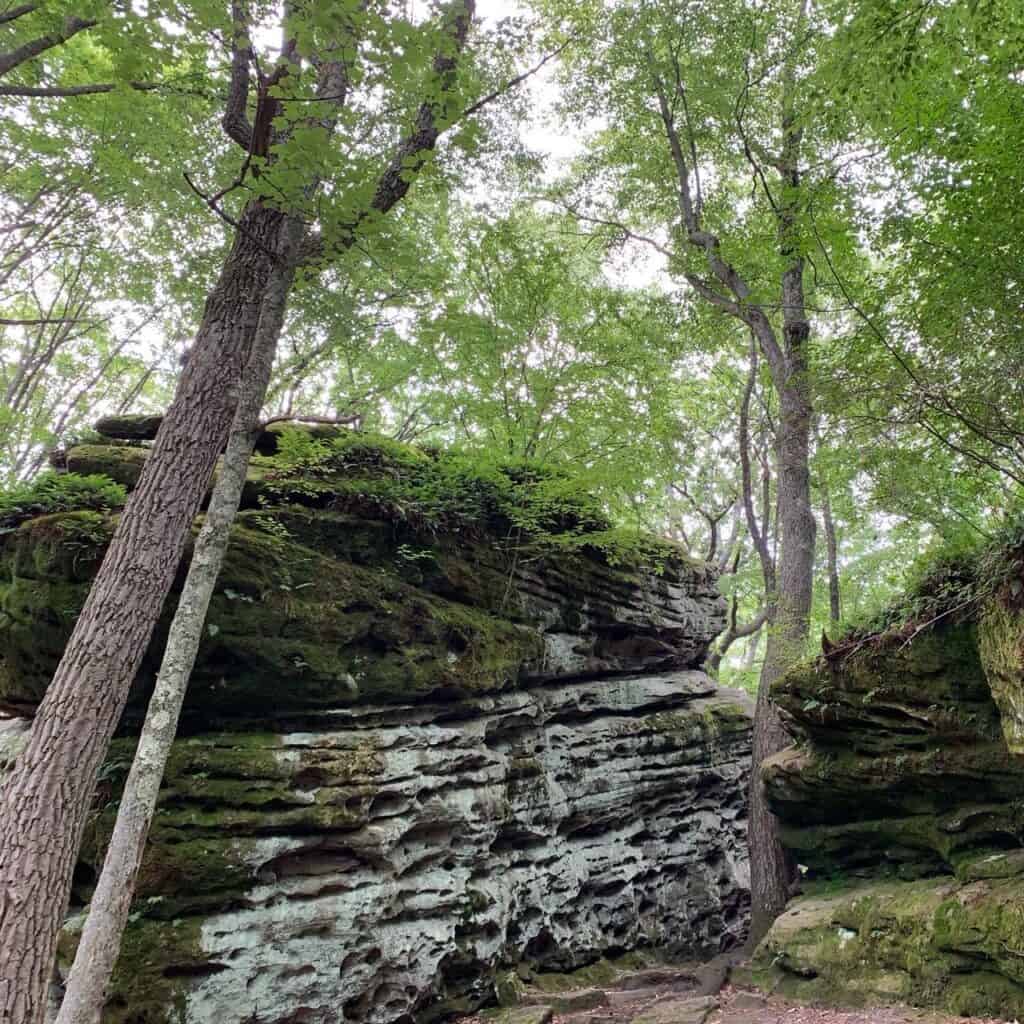 We also hiked a short way down the Beartown Rocks Trail that led back to the Park, but realized while we were steeply descending that we would eventually have to ascend- so we turned around about halfway! 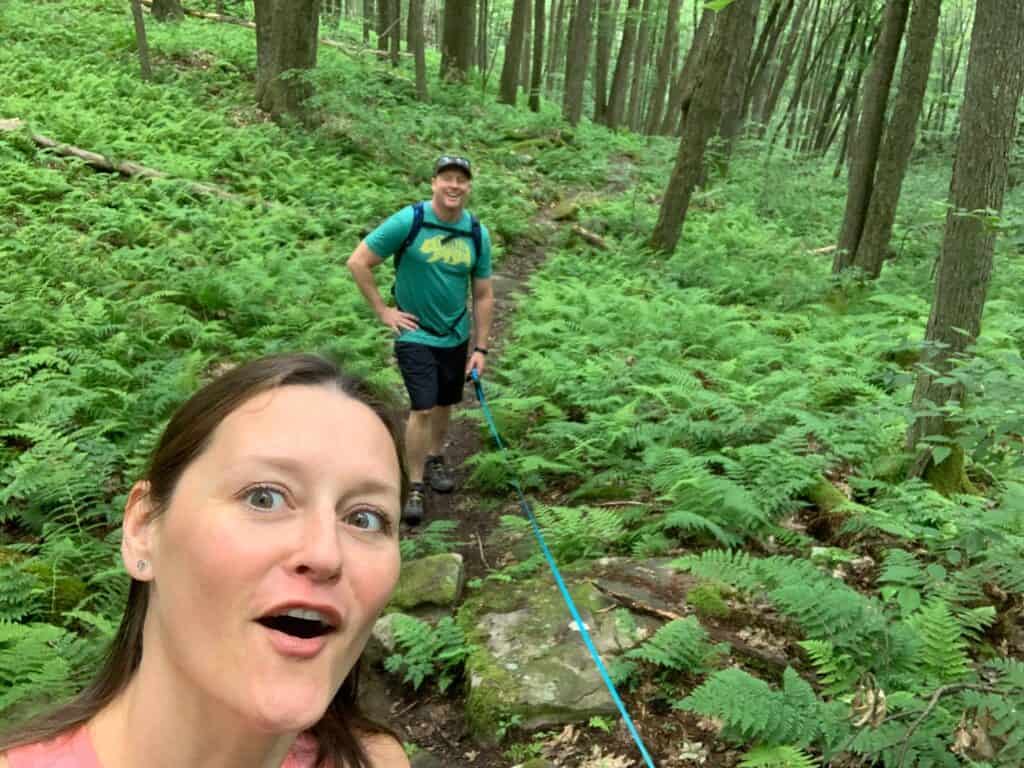 Set your GPS for Lily’s Restaurant and Bakery in Punxsutawney on the way home. At about 45 minutes from Beartown Rocks, the drive gives you time to fully work up your appetite.

We ordered a sandwich and a salad for lunch from the restaurant, but it’s what you’ll find in the bakery that’s the reason to visit.

Lily not only has a variety of cookies, pies, gobs, and cakes, she also has an entire freezer full of ready-for-the-oven pot pies, lasagnas, and perogies! You can easily knock off lunch while you’re there, grab dinner to cook later, and have dessert covered for a few days.

This was our third trip to Clear Creek State Park, and the first for our dog Hazel.

The easy water access, shallow creek, and scenic campground make this a great summer RV weekend resulting in some tired pups on the way home! 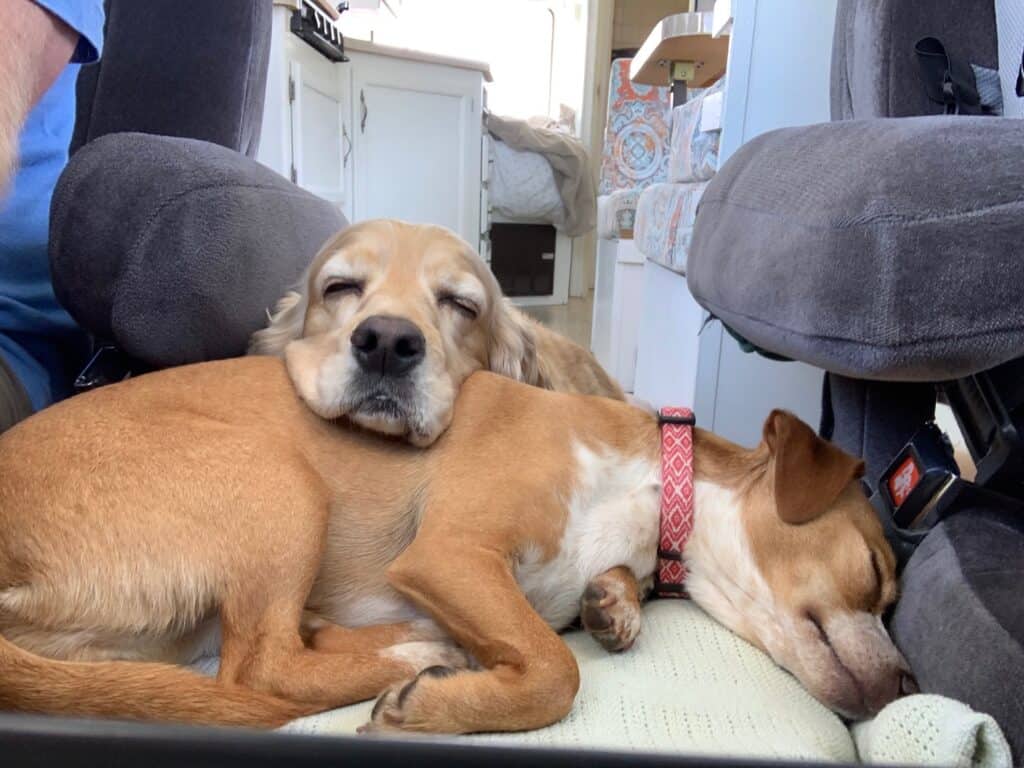 Some things make RV traveling a little easier. We share our recommendations here.

We stayed busy during quarantine. Here’s how.