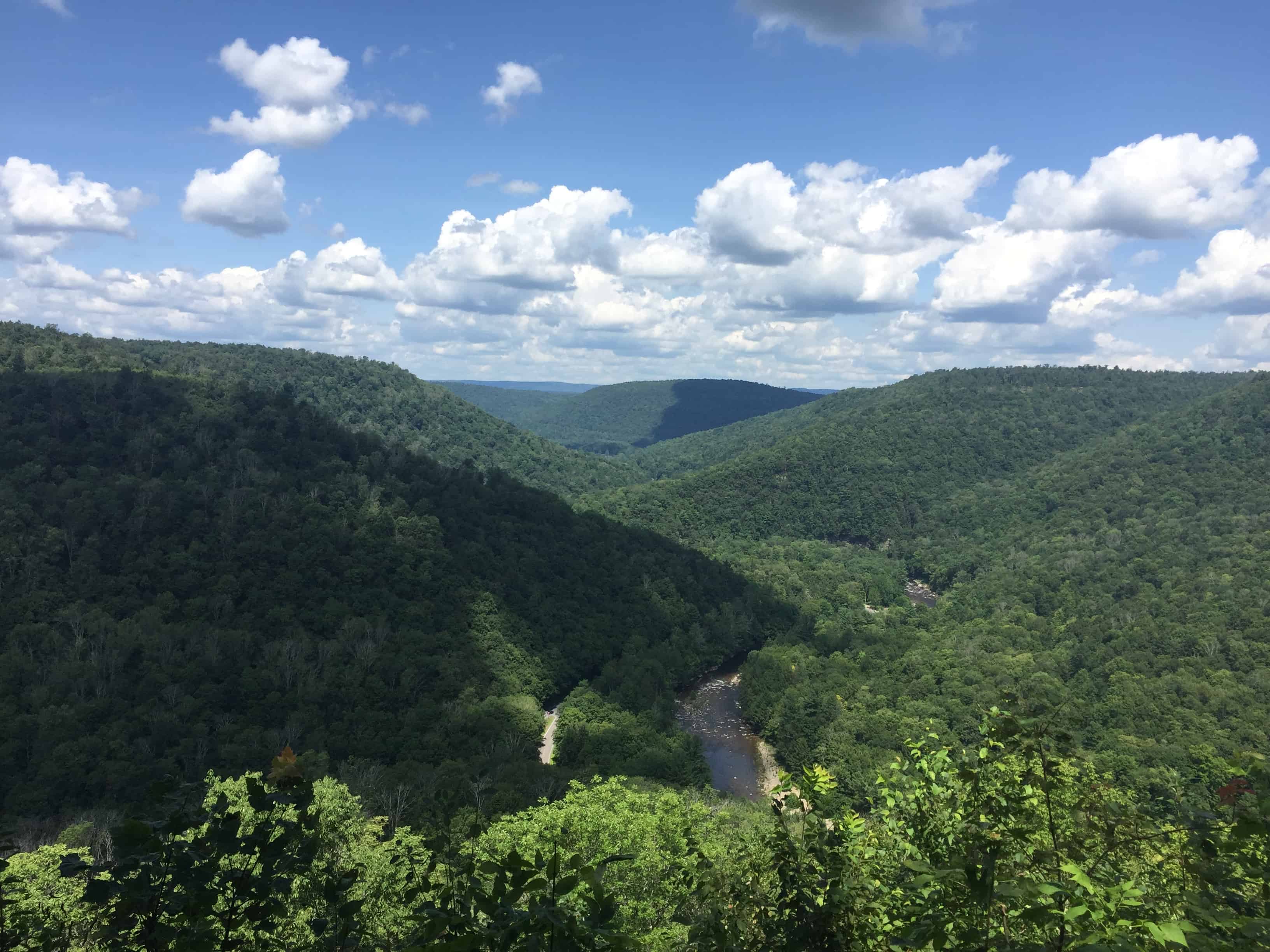 Worlds End State Park in Forksville is located along Loyalsock Creek in Loyalsock State Forest, surrounded by what is called the Endless Mountains area of Pennsylvania. And they sure do seem endless!

Worlds End? Whirls End? Whirl’s Glen? At the onset of its development in the late 1800s & early 1900s, the park went by quite a few different (although really similar!) names. The state finally settled on Worlds End in 1943, and the name has stuck.

Two of the current trails are old horse trails from the late 1800s (including the part with the gorgeous lookout, Worlds End Vista), but the area was used & abused for logging from around 1900-1930. Once the forest was decimated, the state began to make plans to revive it as a state forest park.

As in our other state park histories, you can probably guess what happened next…

The Civilian Conservation Corps moved in & got to work! They built the park up – including replacing trees & putting in roads & trails – and left a fantastically rustic, tucked-in-the-woods place to enjoy!

Worlds End State Park has lots of riverbank for fishing and a really odd beach (no pets, as usual!) for swimming, plus a small gift shop, concession stand, pavilions and a campground.

The beach is built into the bend of the river, with built up walls around it so you enter it like a swimming pool. Buoy ropes prevent you from going down-river. Seemed unusual to us.

The entire beach section was roped off during our visit – I believe because of the intense rains the week before.

The campground has tent camping, RV spots with electric only, and cabins for rent, plus clean shower houses…

The showers (SIGH) had timer buttons with no temperature control.

Timer buttons are my nemesis. It’s hard to believe you can forget in 30 seconds that you have to push a button to keep the lukewarm water flowing, but I forget. Every. Single. Time.

We plugged in at site #19 in the pet-friendly section. Looking at the campground map, you can see we backed in against Route 154.

At first this concerned us since only a few trees separated us from the road, but only about 5 vehicles went past between the hours of 11pm to 8am each night.

Some bonuses were that we could hear the water from the creek/river rushing by, and we were right across from access to the pet-friendly trail  (a part of Canyon Vista Trail) that ran along it. 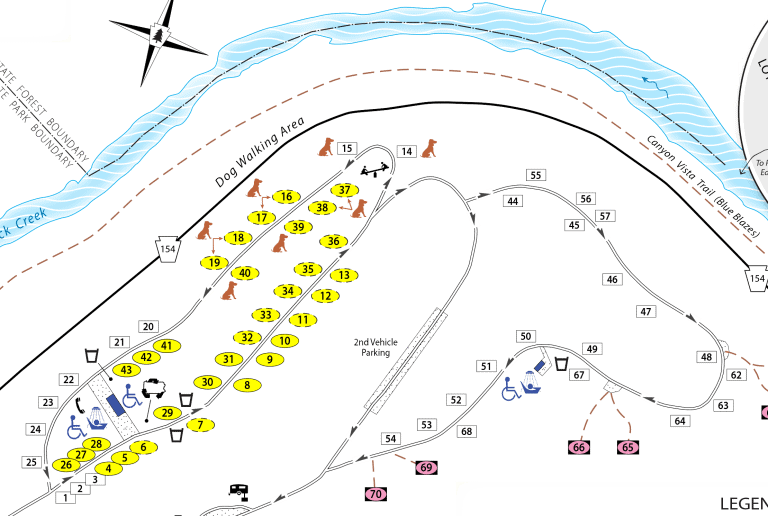 Site #14 looked gorgeous, but didn’t have any electric- so if you are a tent camper, this would be a prime spot.

Did I mention AWESOME? This was easily my favorite hiking park so far this year.

Only one thing was missing from our hiking adventures at this park.

For the first time since May, we didn’t see any bear poop during the trip!

On Saturday morning, we tackled Canyon Vista Trail, a 4-mile loop that SURPRISE! includes a vista along with some steep climbs, a rock garden, and plenty of little spring-fed streams for quick dog drinks (I know, giardiasis, but we can’t stop him). 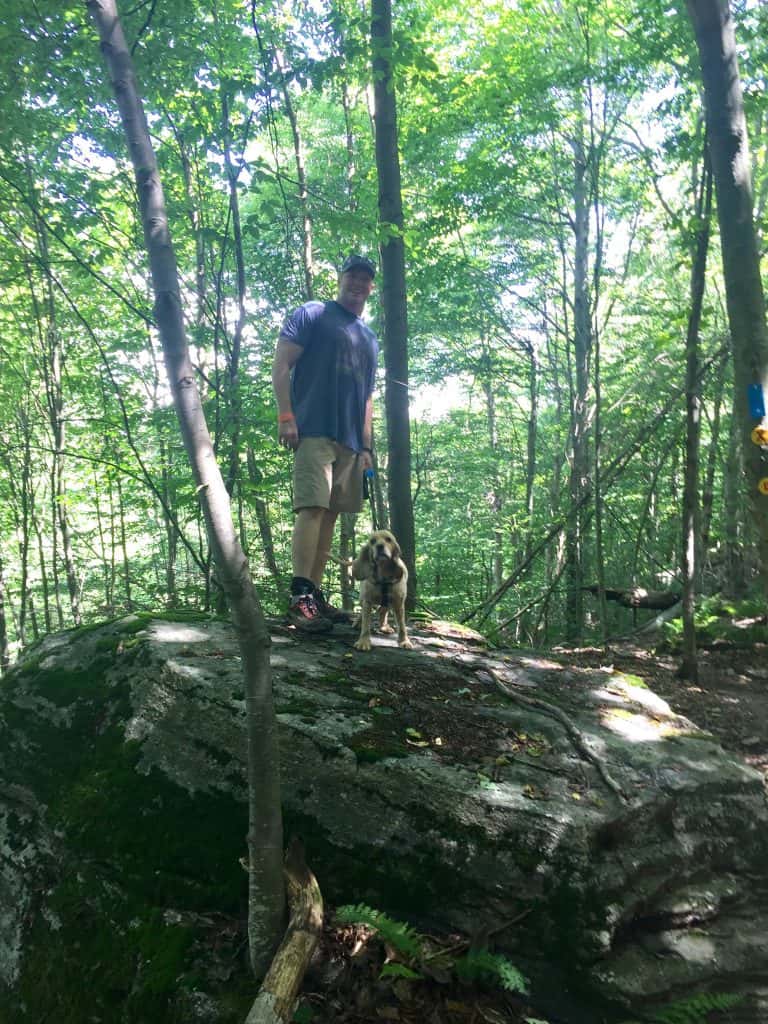 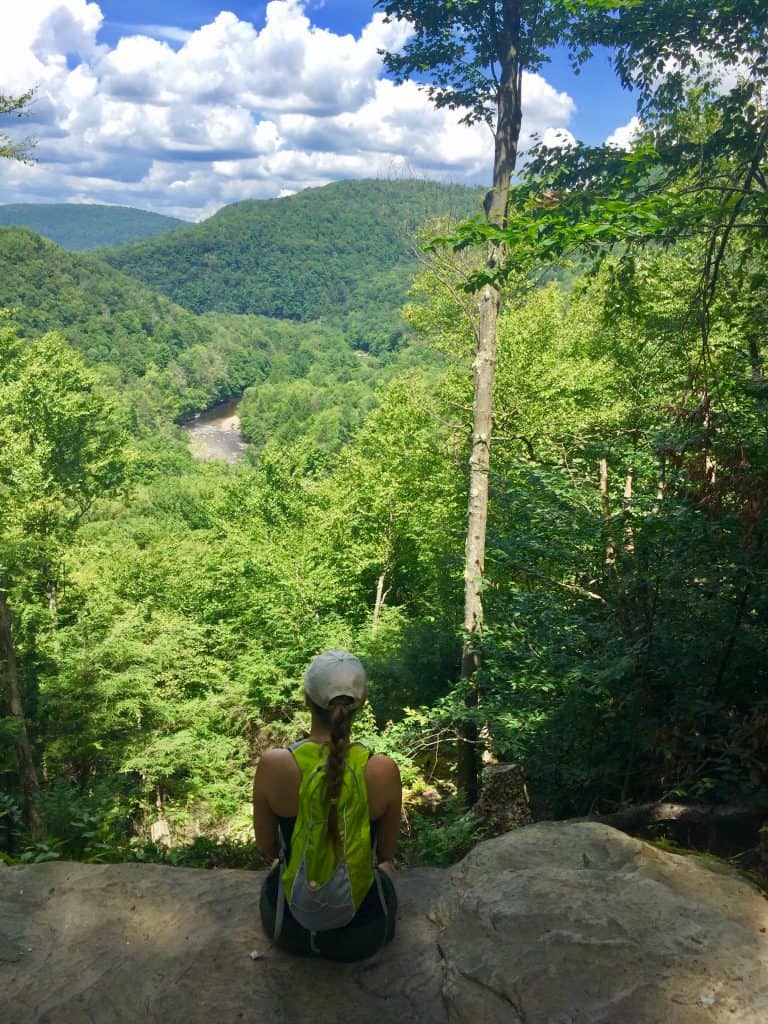 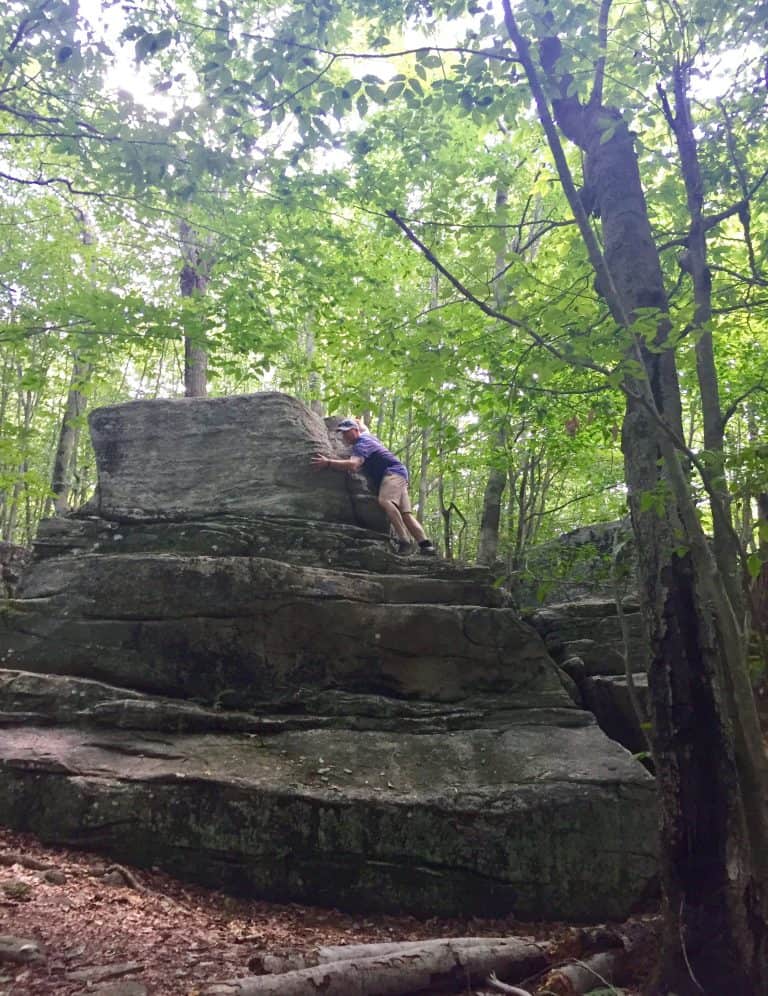 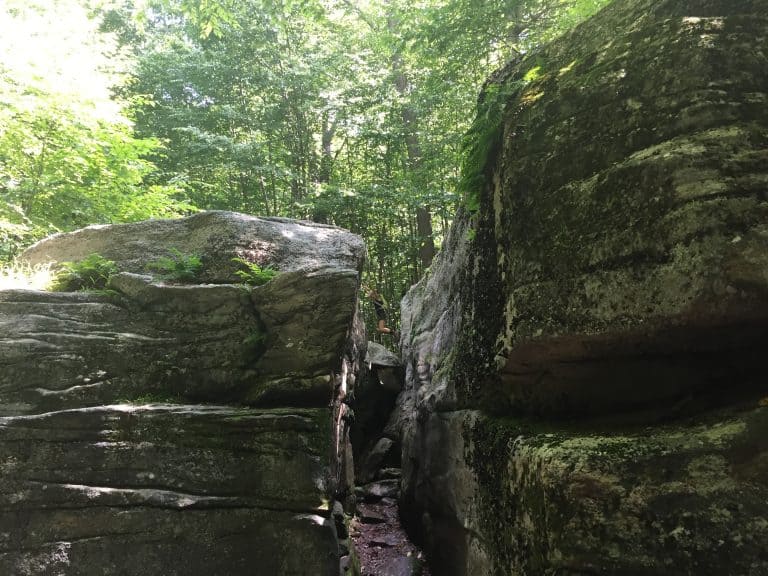 On Saturday afternoon, we walked down the road from the campground and got on the Double Run Nature Trail.

At a little over a mile, this trail was one of my favorites EVER in any state park so far!

It had a few steep climbs and slippery rocky/rooty sections, but they were quick & it was oh so scenic!

We passed six or seven waterfalls & a few footbridges, which gave Franklin plenty of swimming opportunities.

Russ even attempted a log crossing, but changed his mind. 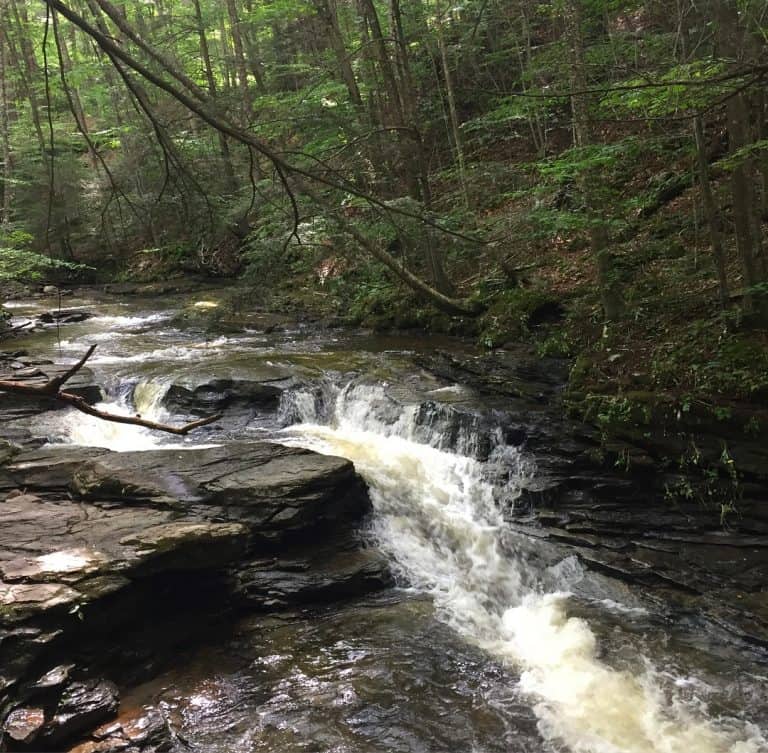 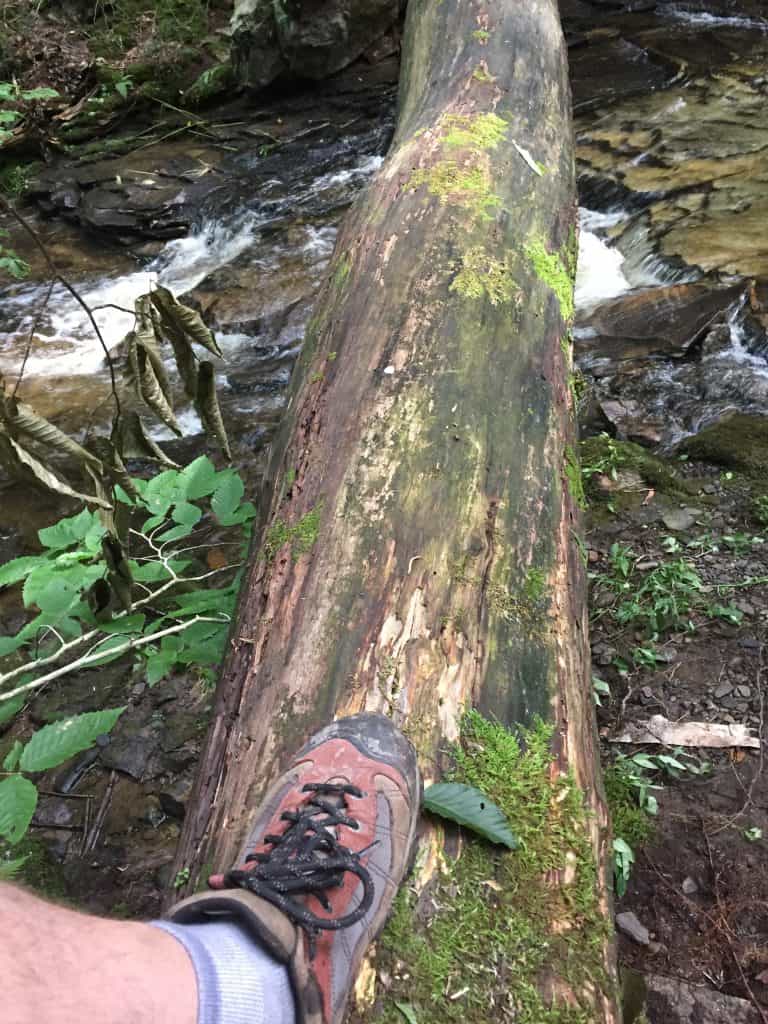 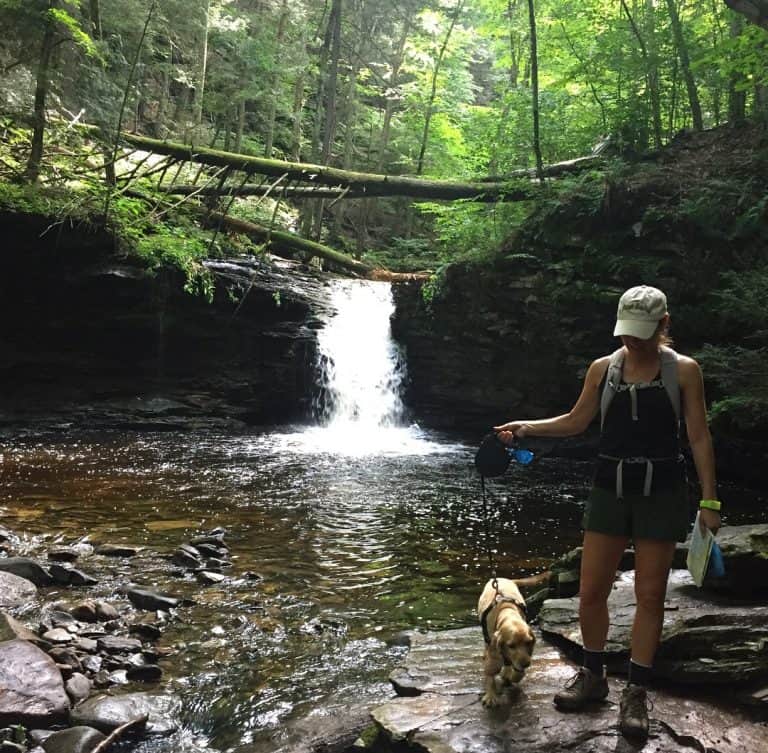 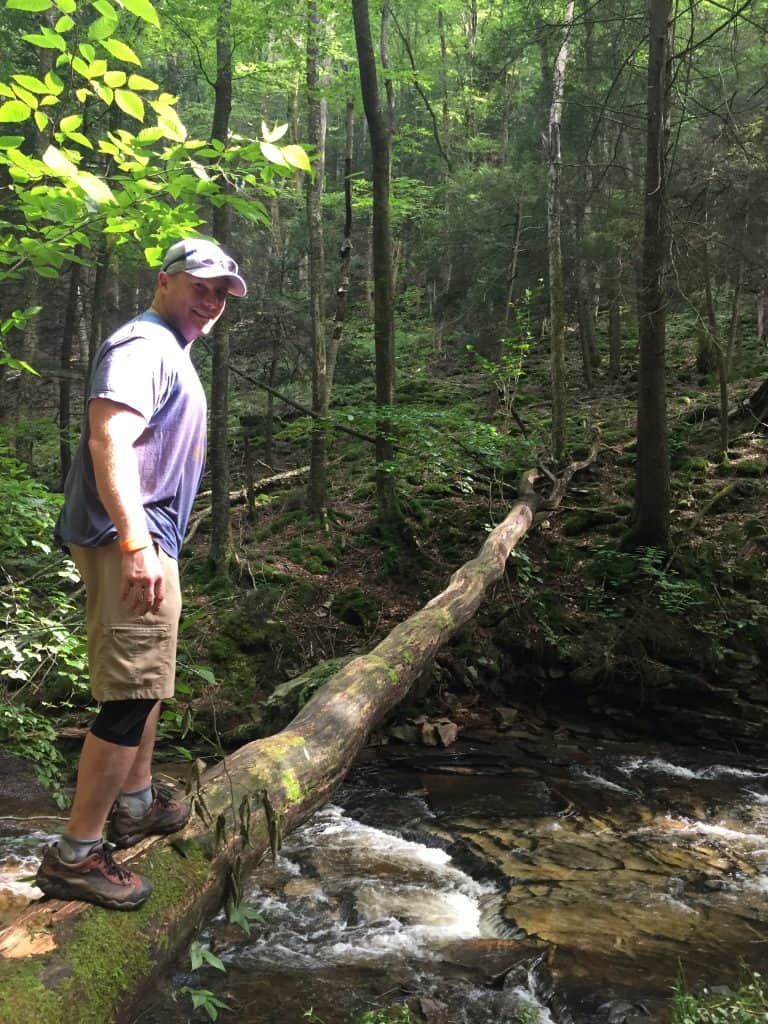 And it was AH-MAZ-ING!

If you are looking at the mountain side from across the river, we started on the really steep ascent to the left, went up to the lookout, then descended on the rocks to the right.

Franklin navigated the rock scramble like a champ, but don’t let the fact you may need to Heismann carry a smaller dog deter you! This hike was challenging for all of us, but so worth it… the perfect hike to take on before saying goodbye to Worlds End State Park. 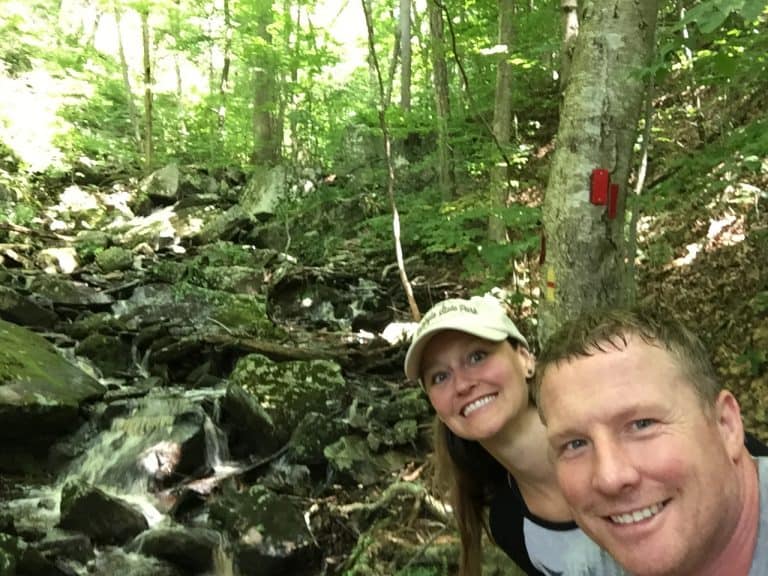 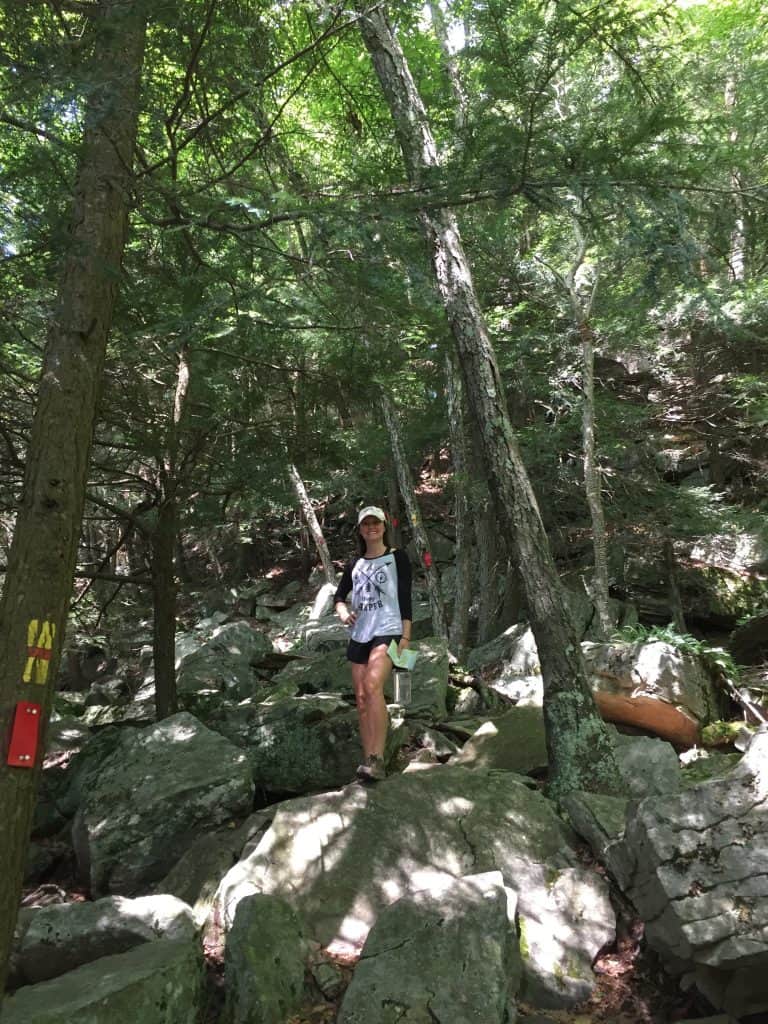 We even got this shot of lonely Axl Roads from the lookout! Can you see him?! 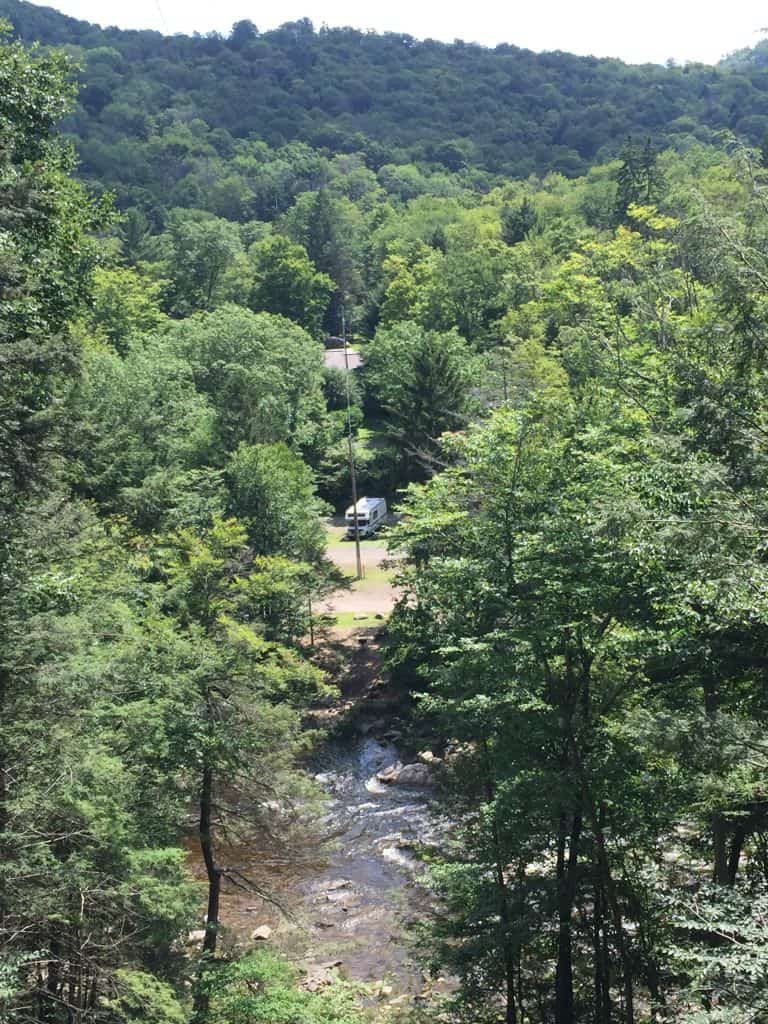 As far as wildlife….well, that’s where Worlds End State Park came up a little short for us. Other people did tell us they had seen wildlife, but most of it eluded us.

We saw a few deer, but no snakes, no elk, and no bears.

We did see some funky fungi, like this one: 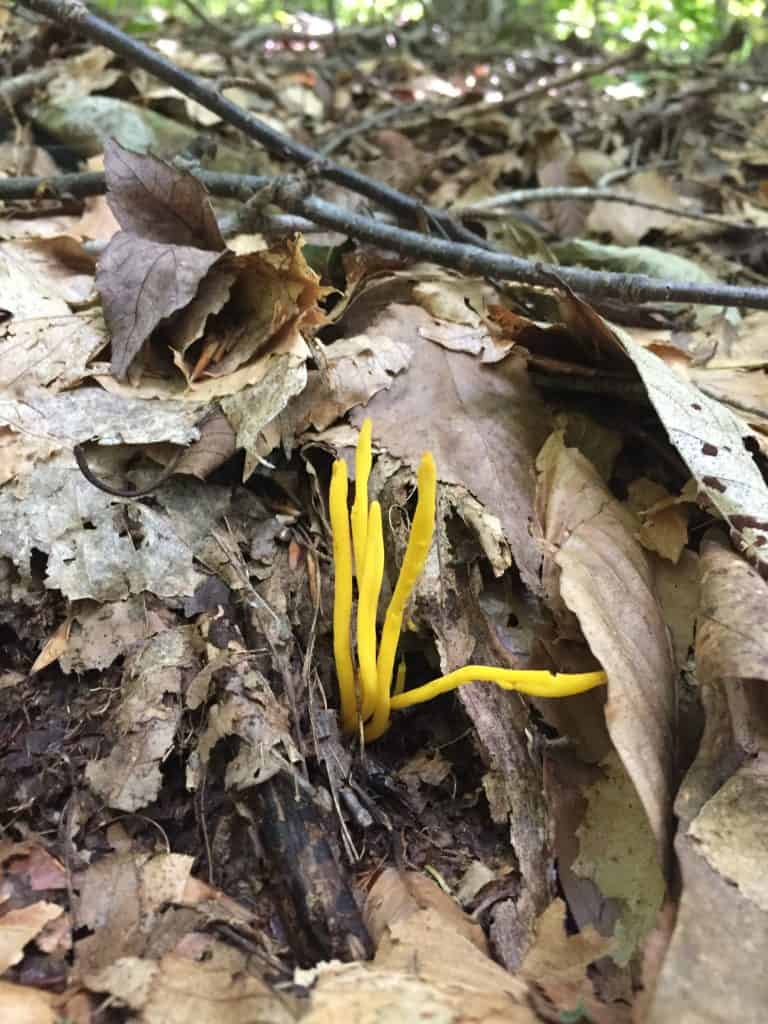 If you love a good mushroom photo as much as me, you can catch more Worlds End fungi shots on our Instagram.

On the way home & only about 7 miles from the park, we stopped to grab lunch at Eagles Mere Historic Village.

The town was small & clean & cute & used to be a resort town to escape nearby Sonestown, which was a booming lumber hub in the late 1800s to early 1900s.

Now Eagles Mere is on the National Register of Historic Places, and is home to a few interesting museums, a nifty railroad display, and a lake full of little sailboats.

About a mile or so from the entrance to Worlds End State Park, stop at Forksville General Store to see the covered bridge close up, snag yourself some penny candy, and order up a few of Big Mike’s Hoagies for the road!

If you’re bringing the RV, unfortunately you can’t roll through the covered bridge (8 foot limit). Also, park in the street (we went in front of the Post Office), because the parking lot is snug.

Russ gives the Godfather Cheesesteak two thumbs up, and I loved the garlic sweet potato fries…and it’s so close to the park, your food will still be warm when you pull into the campground! 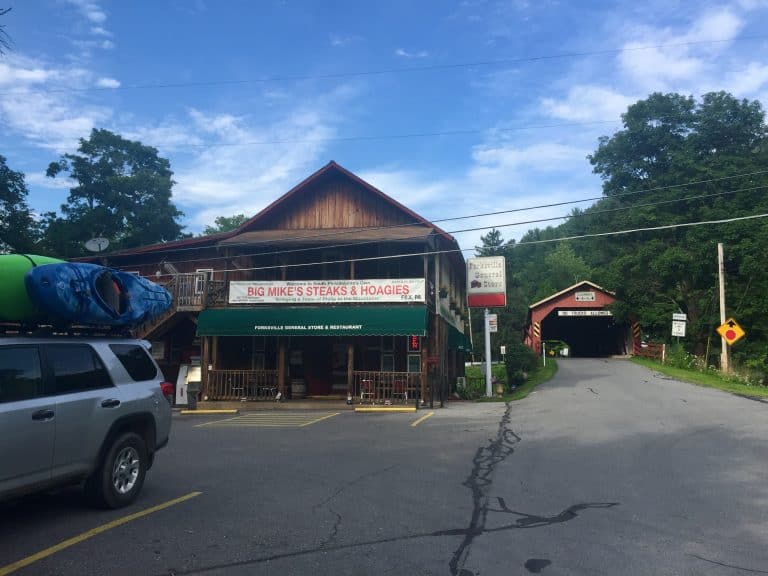 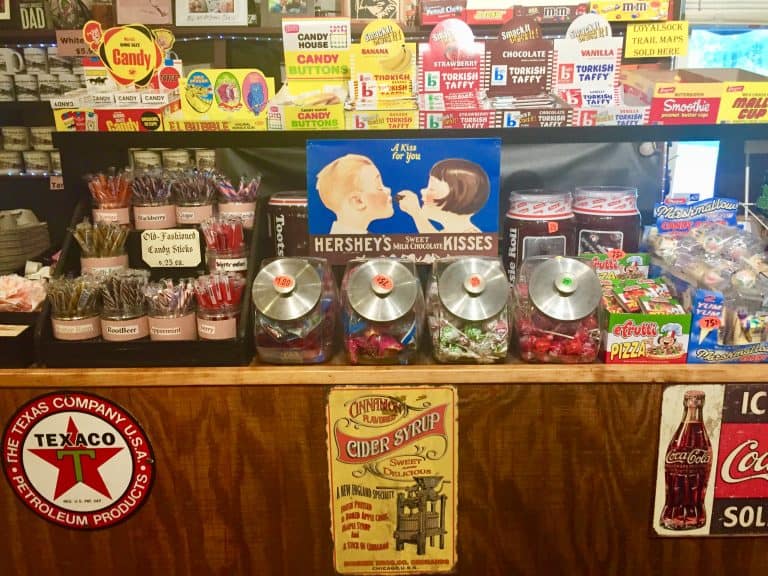 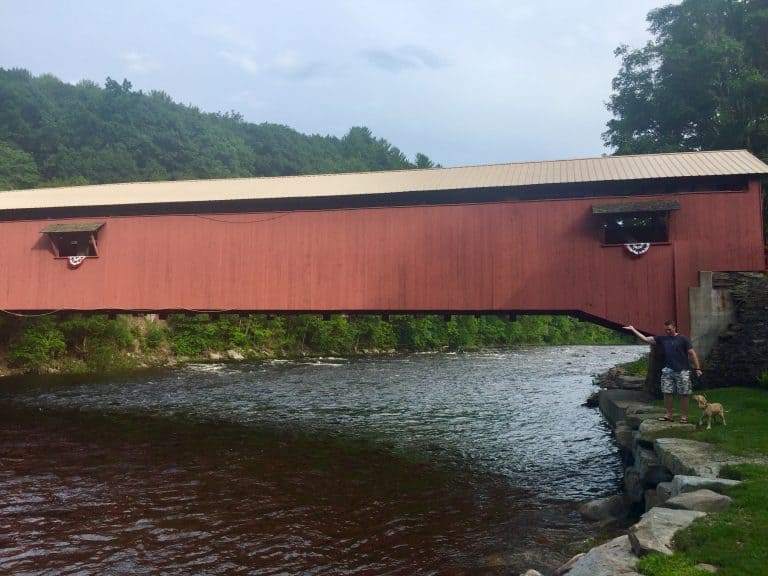 This one is definitely in contention for our Top 3 State Parks of PA list this year!

Know any park or trail tips about Worlds End State Park or have other pit stops you recommend along the way? Share below!

All this hiking may leave you wanting this simple older RV mod. Just do it!

Or maybe you want a place to keep a list of all your favorite trails. Also easy to do!