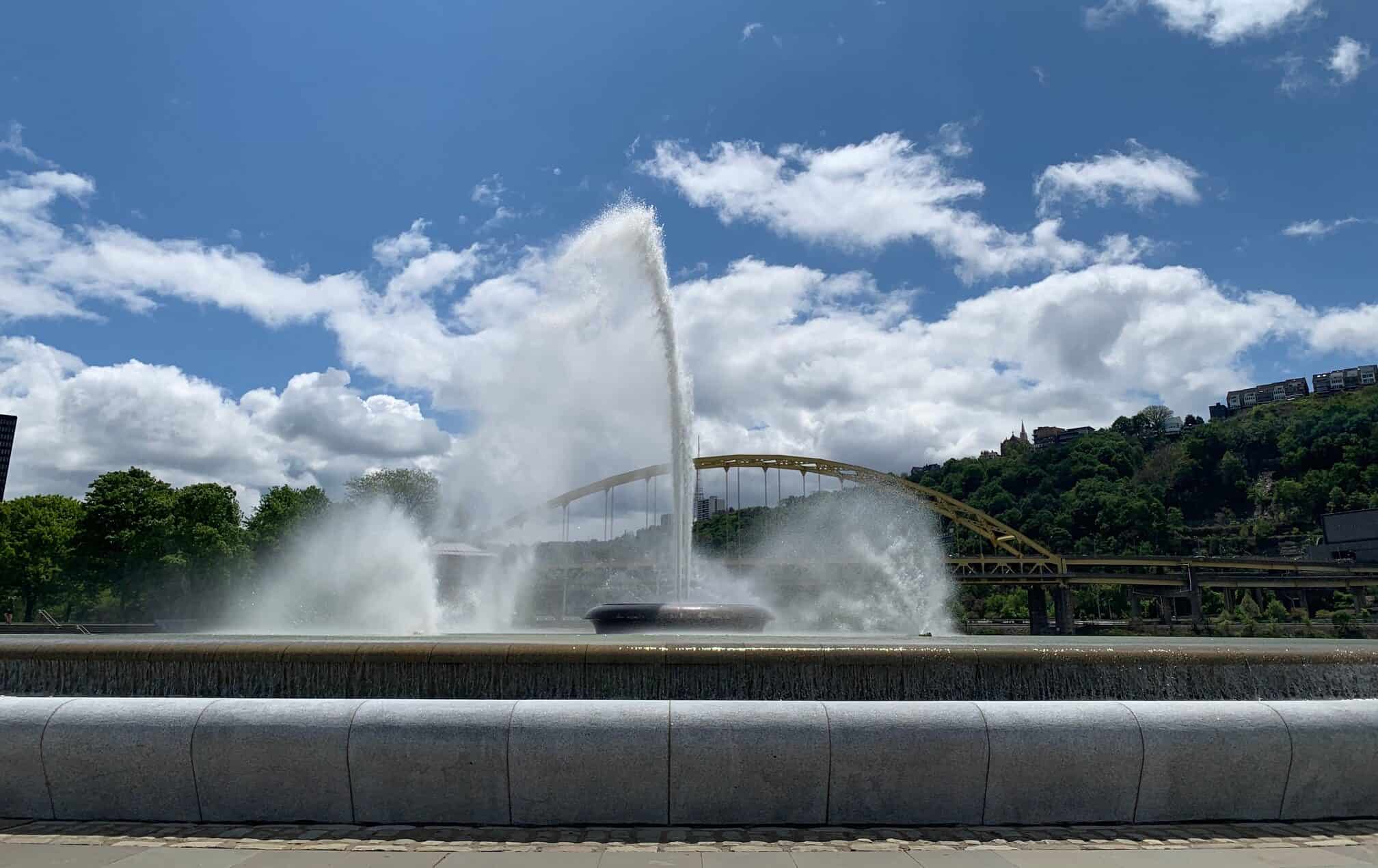 Point State Park in Pittsburgh, PA, is an amazing oasis in the middle of the city, full of history, panoramic views, and an iconic fountain (not to mention only about a half an hour from our house!).

While parking can be a challenge, you’ll be surprised how much open space and how many walking trails are in and around the park for you to enjoy.

Point State Park is located in the city of Pittsburgh, right at the “point” where the Monongahela River meets the Allegheny River to form the Ohio River. It became a park in 1974 and was designated a National Historic Landmark in 1975.

The land the park now sits on is full of history! Not only did George Washington notably visit the Point, the French, British, and American Indians all tried to establish positions there at one time or another. You can read the entire history here for the details.

Fort Pitt was built by the British in 1759, but eventually controlled by the Virginia Territory and then used by the Continental Army.

The Block House is the only building left of Fort Pitt, and you can schedule a tour of what the PA DCNR confirms is “the only authenticated pre-Revolutionary War structure west of the Allegheny Mountains”. 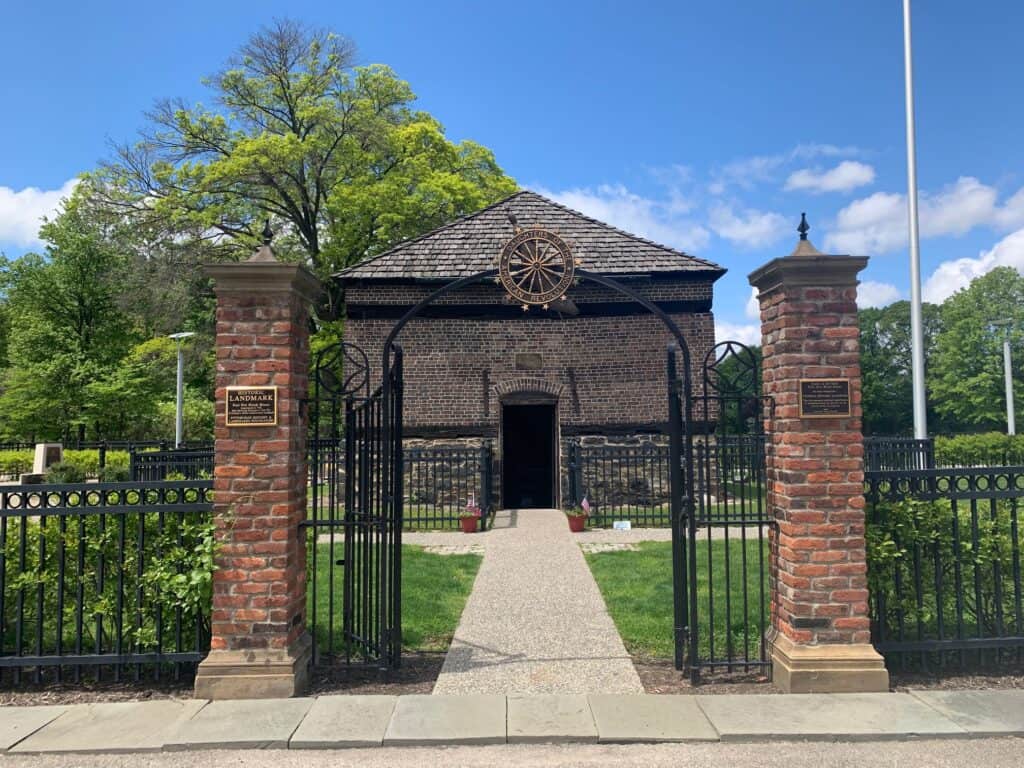 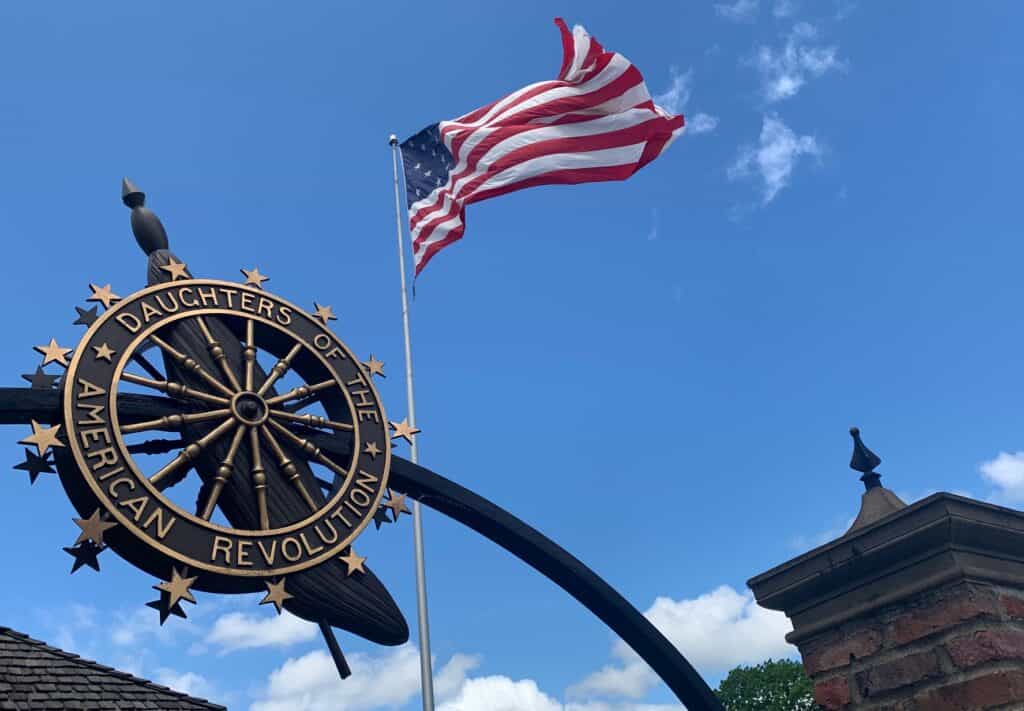 If you didn’t bring your dogs (and of course, we did), you can also stop for a visit at the Fort Pitt Museum, open daily from 10am to 5pm.

The Museum coordinates special programs and tours in the park, so you can check for times there, too. 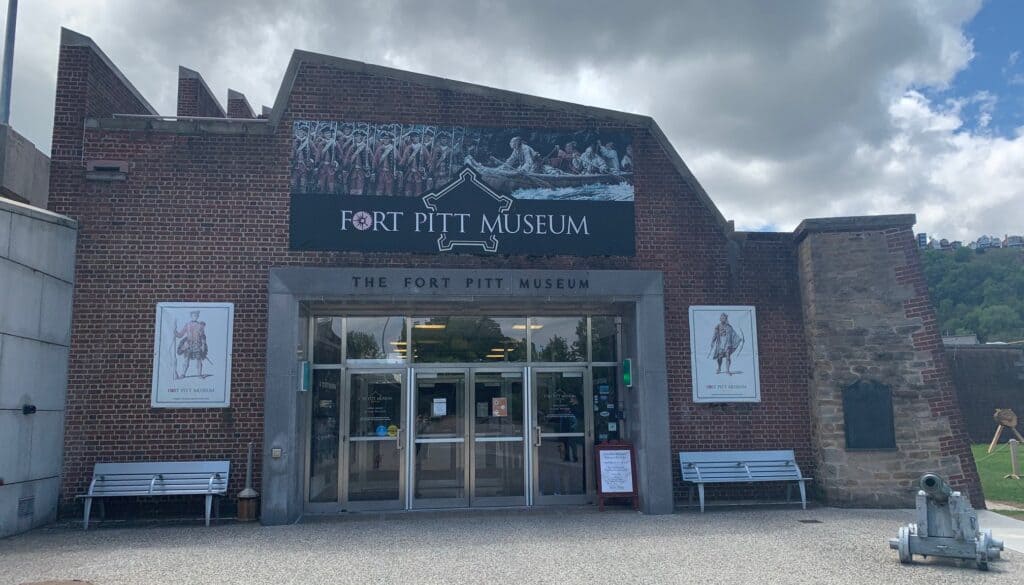 Aside from the Block House and the Museum, Point State Park is dog-friendly, with plenty of wide, open areas, sidewalks, and trails your pooches will appreciate. 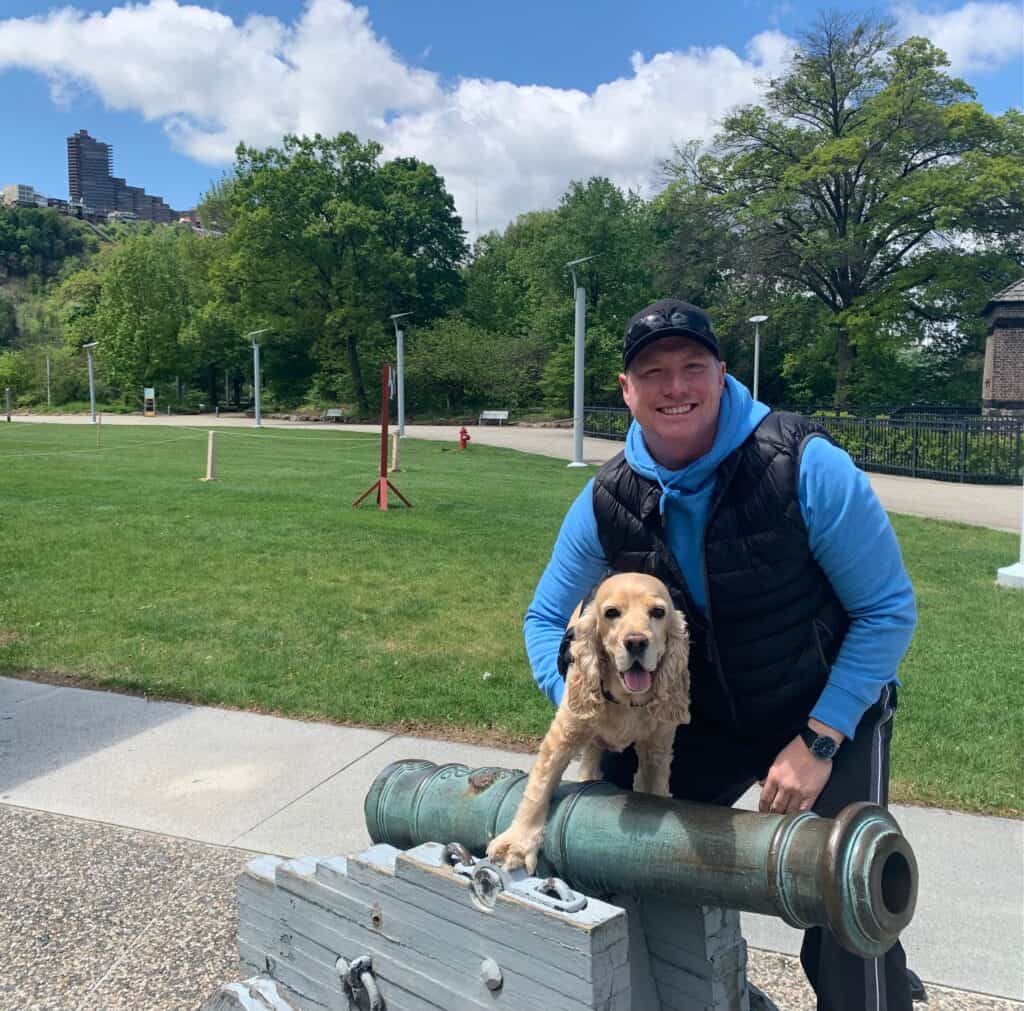 For more on Pittsburgh history – and some amazing befores and afters of the city including the Point – check out Pittsburgh Then and Now by the Pittsburgh History and Landmarks Foundation.

Point State Park does not have a campground. Because it is in the city of Pittsburgh, there are a lots of options nearby if you’d like to spend the night.

Visit Pittsburgh keeps a great list of hotels and resorts in the area.

If you are driving to the park, hopefully you are lucky enough to find paid street parking nearby. There are also several parking garages and lots within a few blocks of the park.

Point State Park is surrounded by lots of walking and biking trails that run right through it – like the Great Allegheny Passage and the Three Rivers Heritage Trail – but there are also some great shorter strolls in the Park area.

When you enter the front of the park, you’ll walk through a giant grassy area to the Portal Bridge. 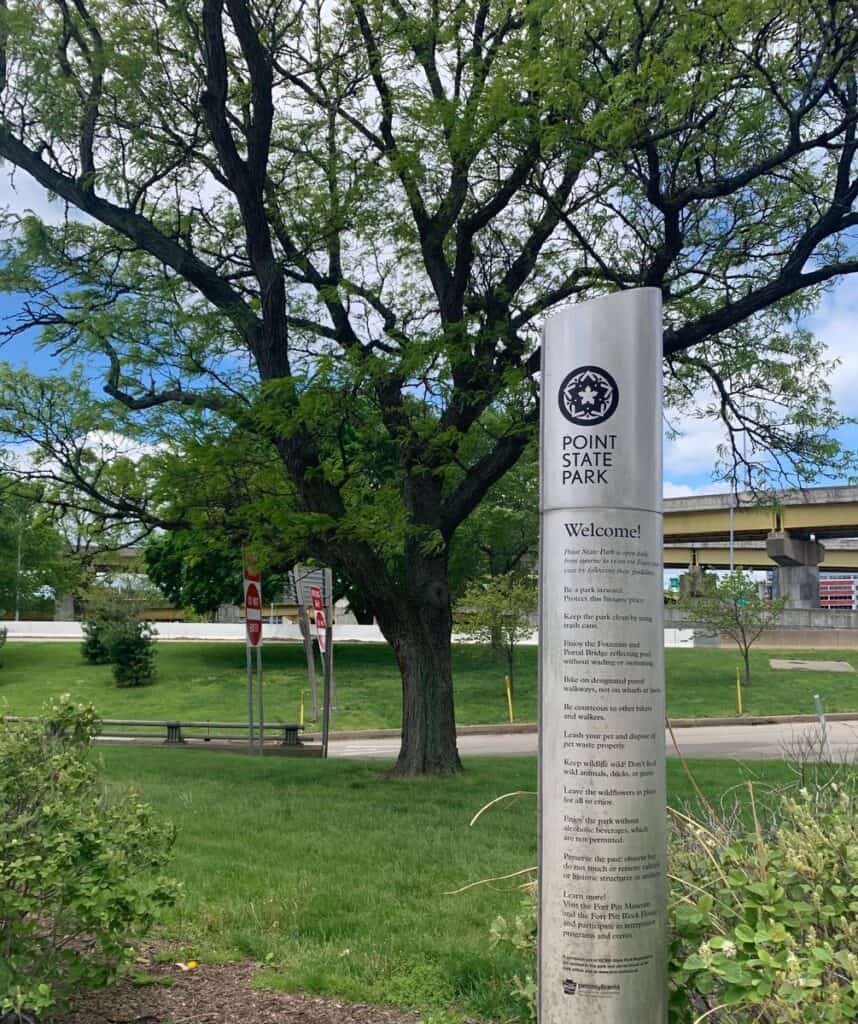 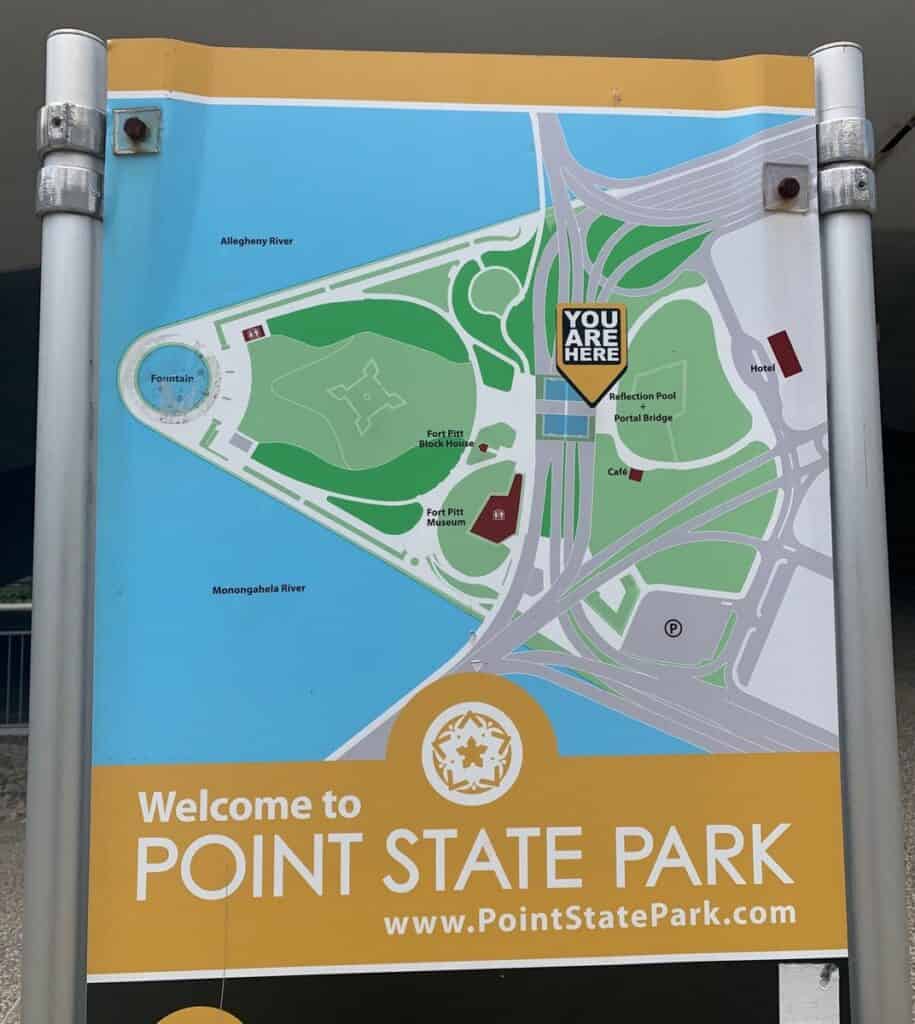 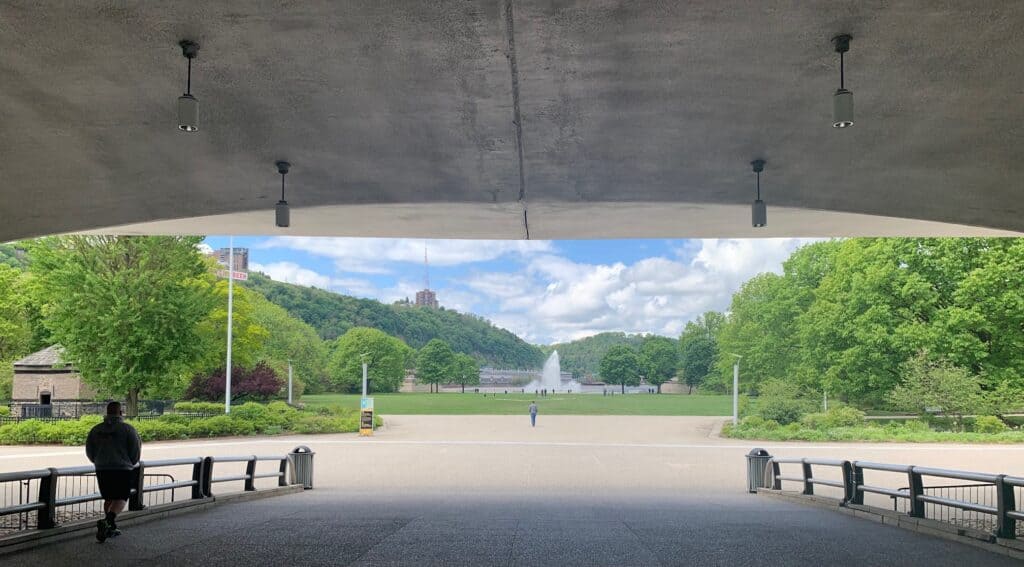 If you hang a right at the end of the bridge walkway, you’ll put yourself onto a tree-and-native-plant-lined path considered the Woodlands areas of the park. 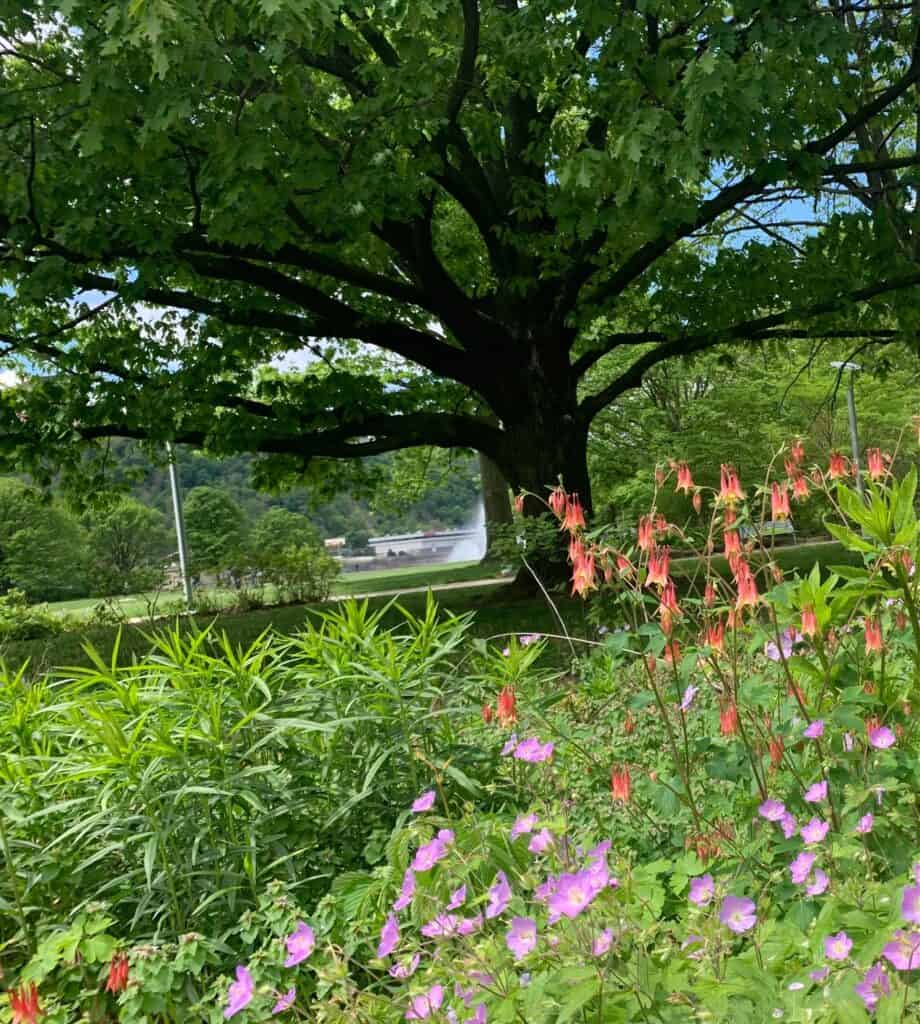 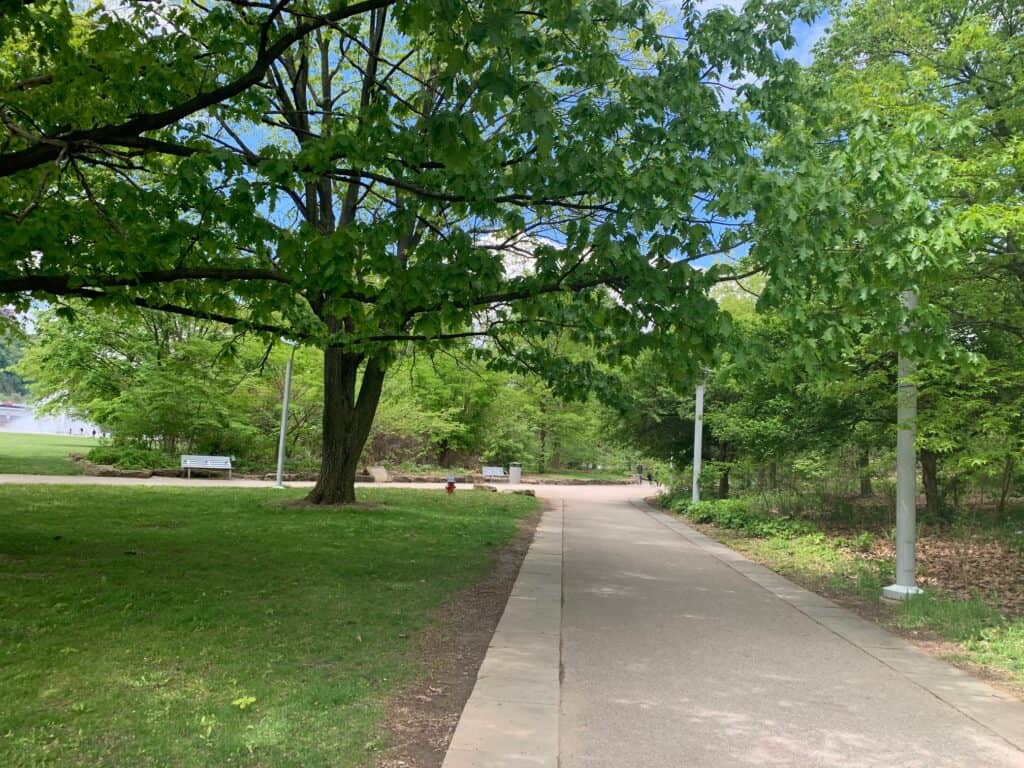 At the end of the walkway, you’ll be on the Allegheny River side of the park with some great views of Heinz Field and Carnegie Science Center. 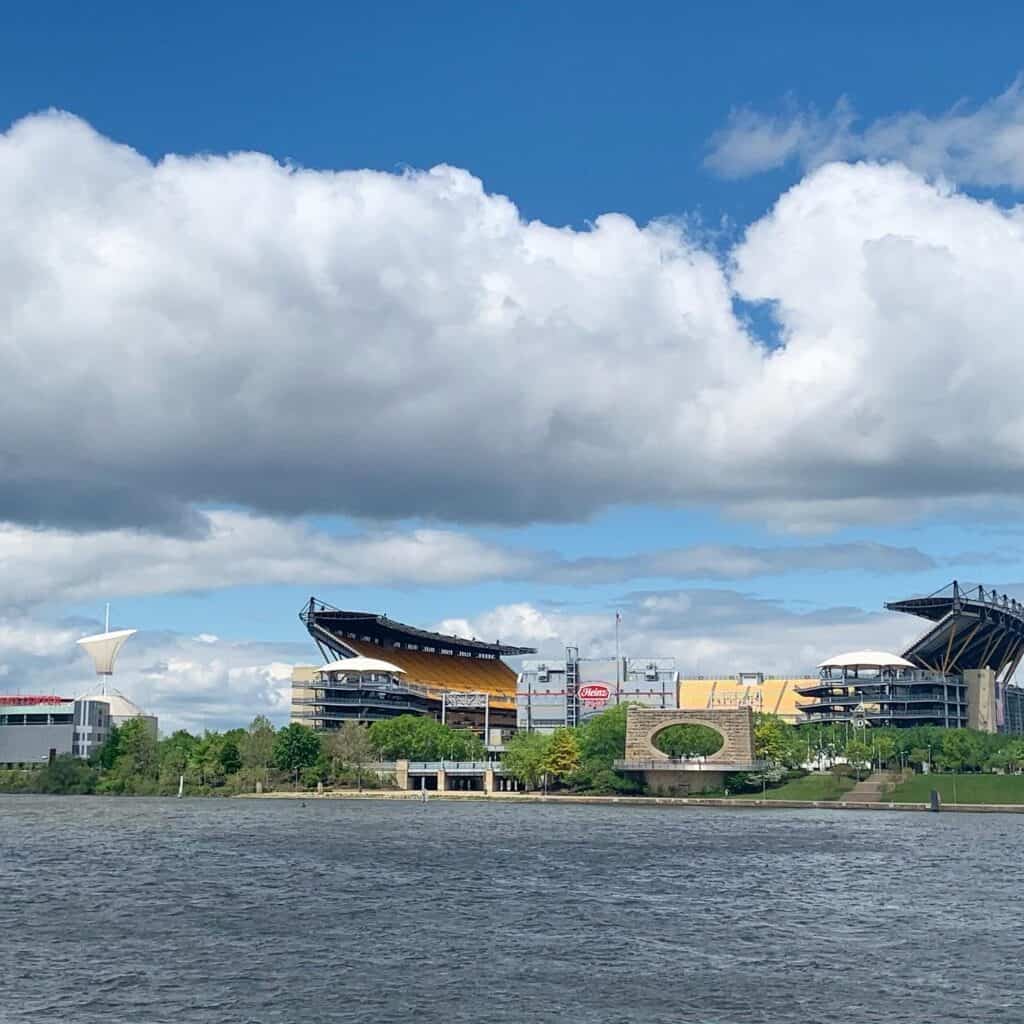 But of course, the pièce de résistance at the Point is the Fountain!

The day we visited was windy, so of the 20,000 gallons of water that flow through the fountain per minute, many of them were getting sprayed around the viewing area. 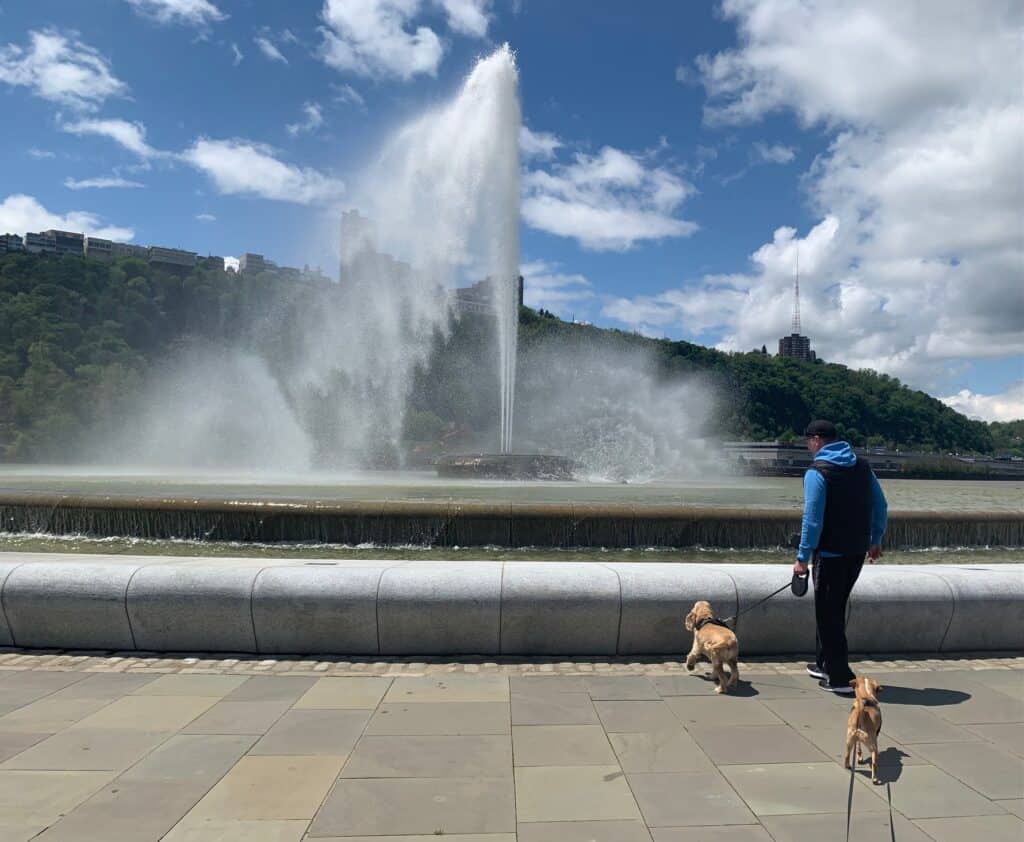 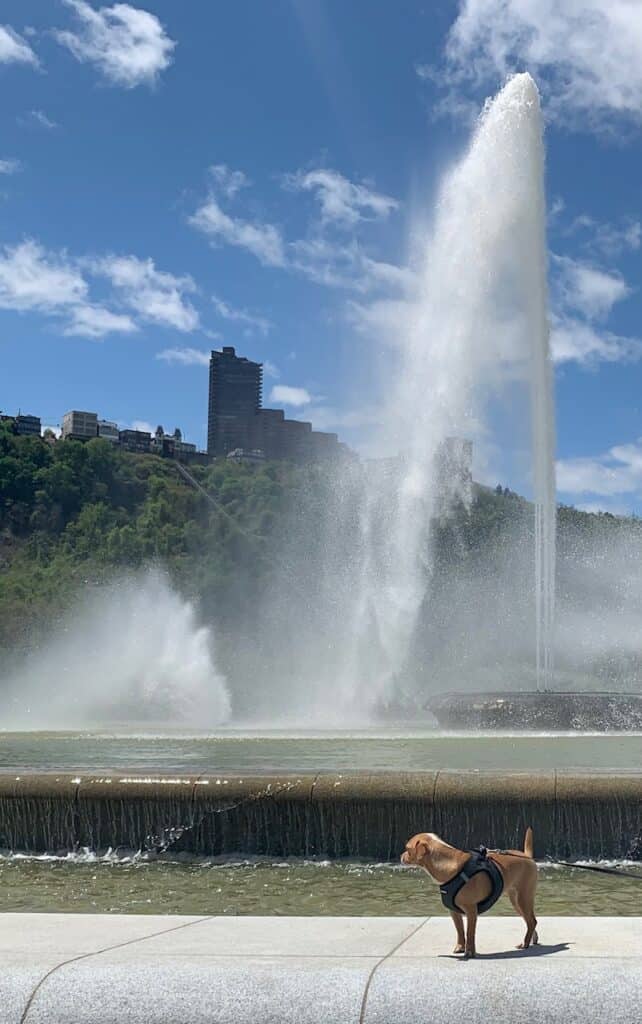 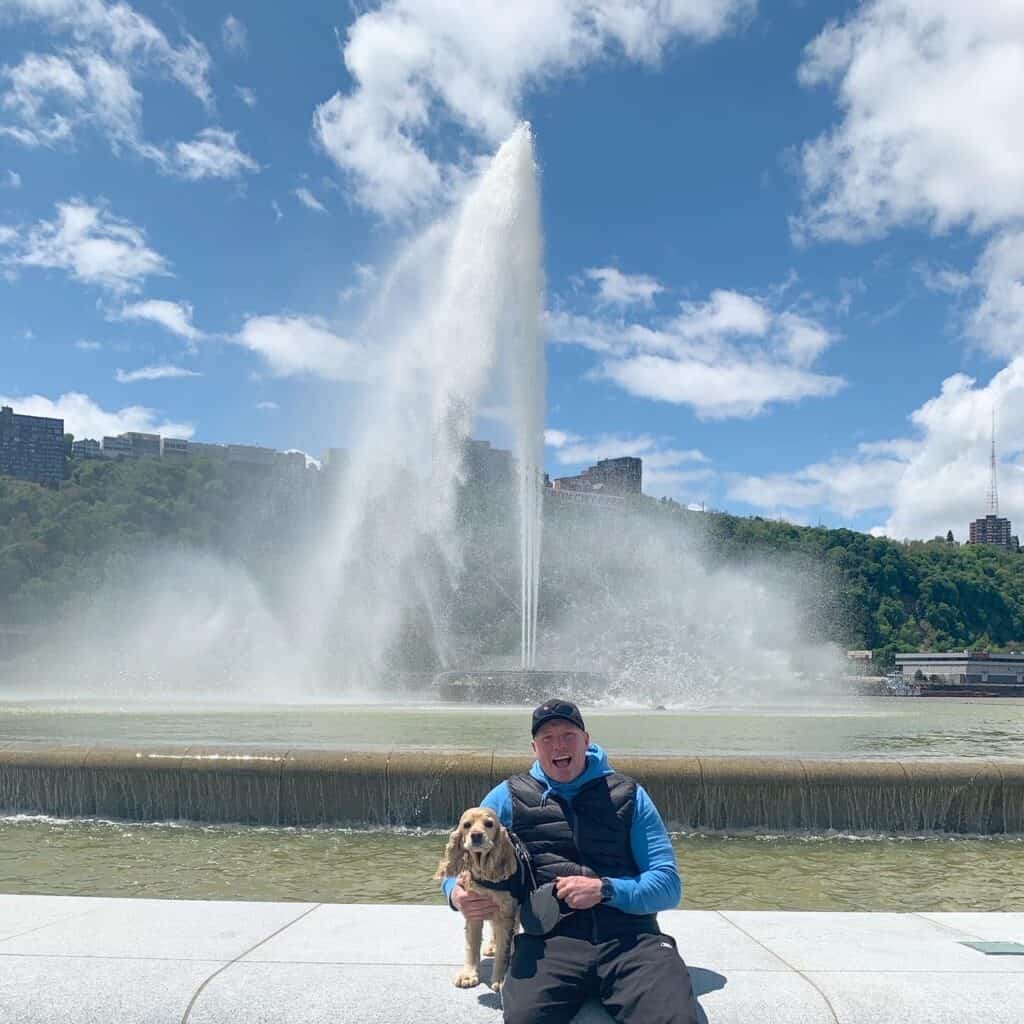 There are monuments and plaques throughout the park marking historical or geographic significance, including this one called “Forks of the Ohio Marker”. 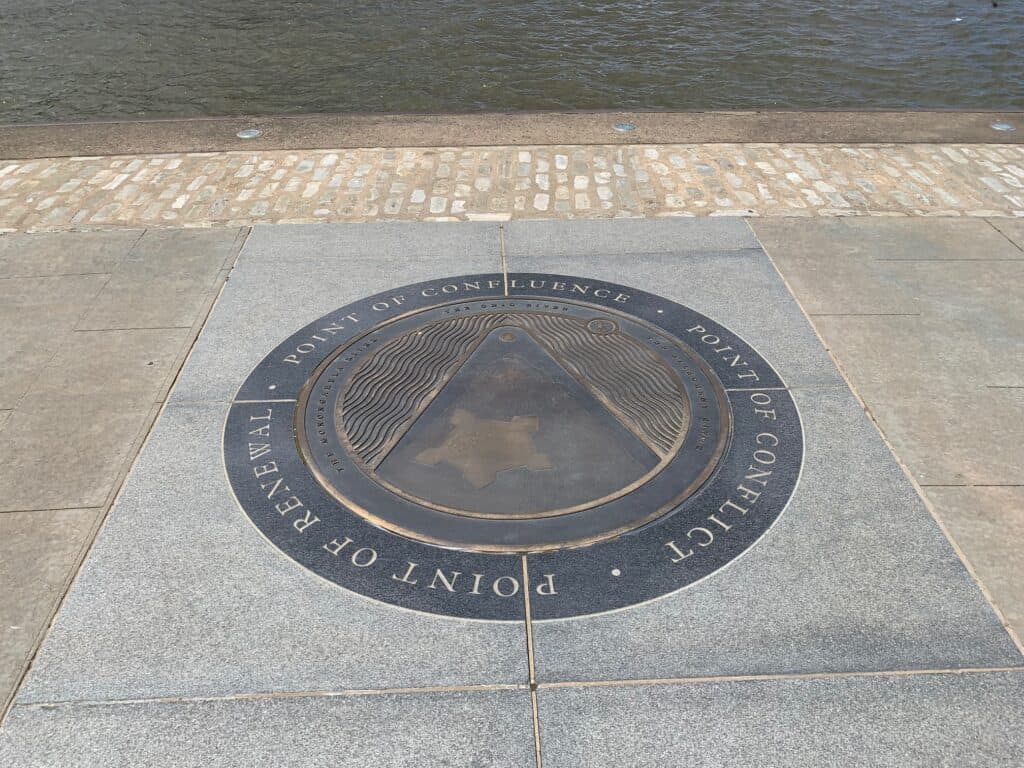 You can round out your walk like we did around the other side of the fountain, onto the Great Allegheny Passage and Three Rivers Heritage Trail. 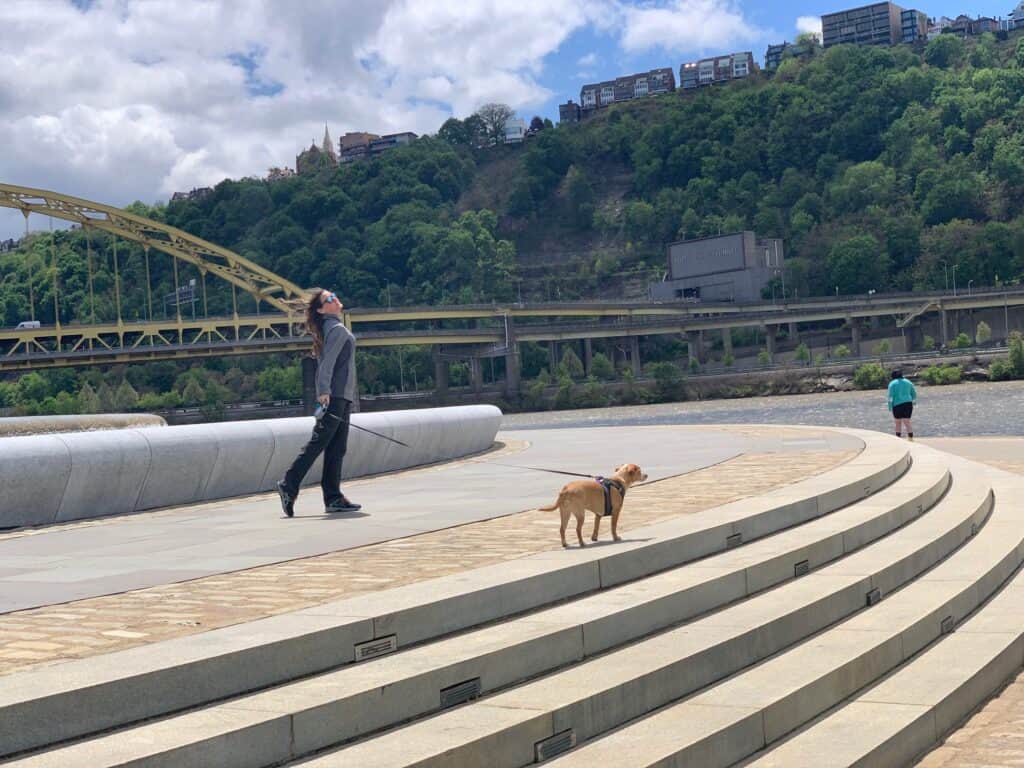 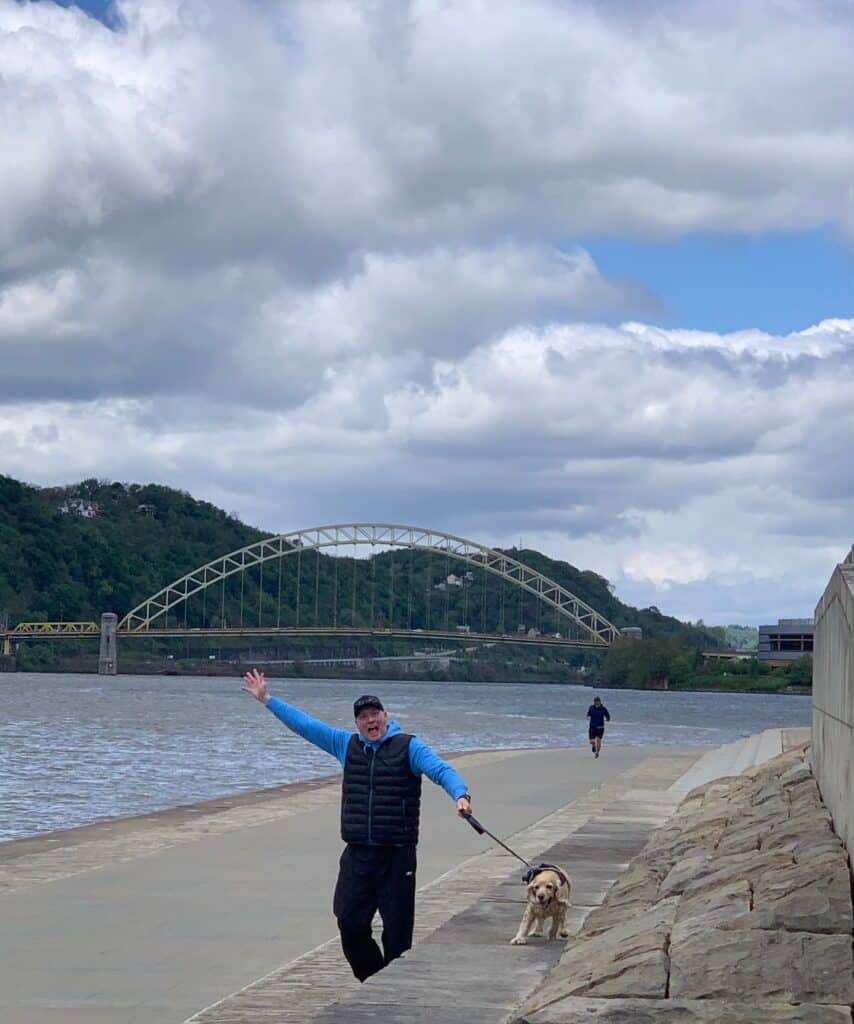 Finally, you can circle back to the park entrance and get a gorgeous view of the city – and see if you can spot one of the large, friendly city squirrels that live there! 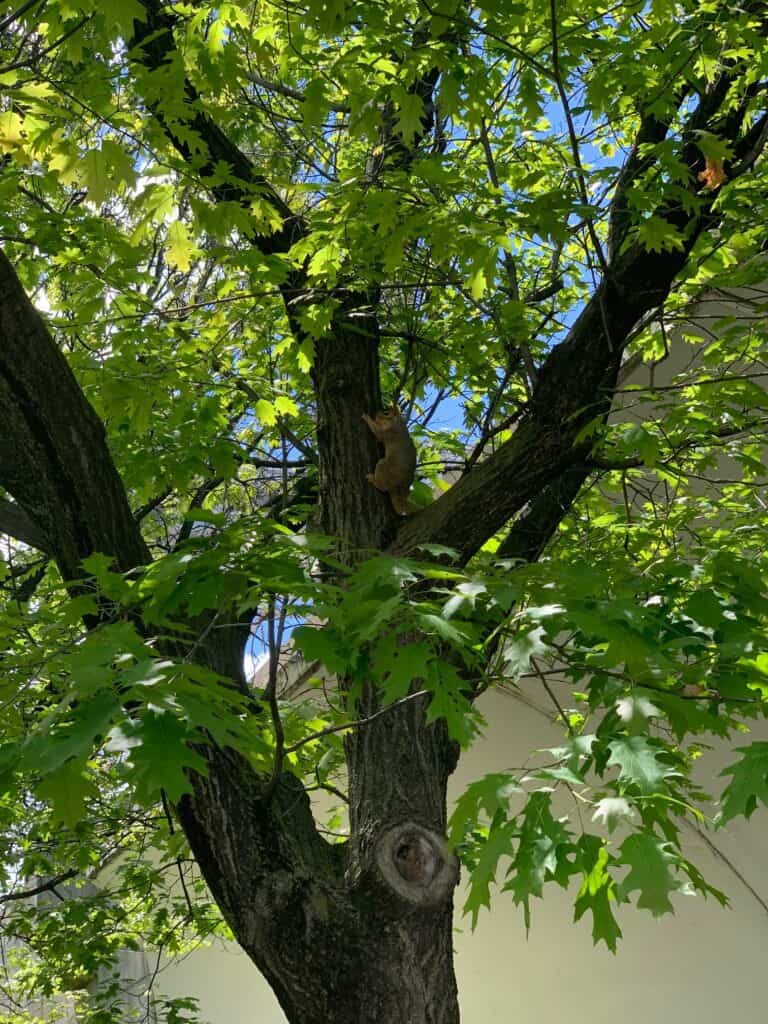 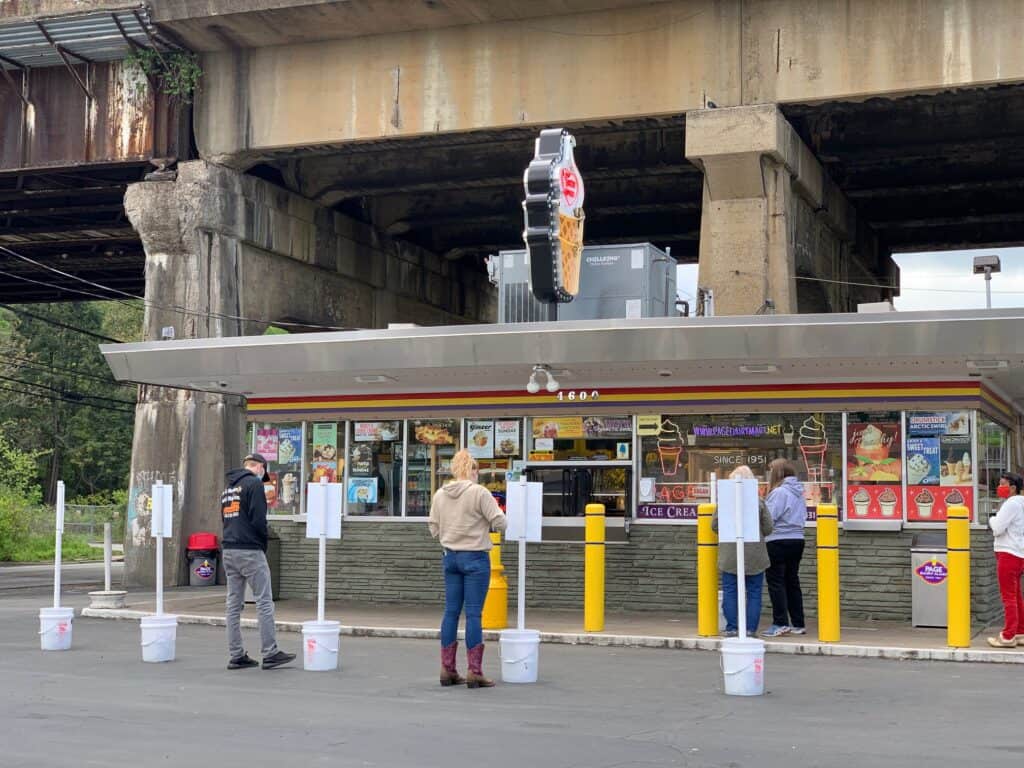 Point State Park is right in the city with TONS of options for Pit Stops depending which direction you are coming or going from.

Since we live just south of the city, we highly recommend winding down your day at the Point with a stop at Page Dairy Mart.

Nothing at Page’s will let you down- every pick is a winner!

It is truly a burst of nature right in the middle of the city that Franklin and Hazel know your furry friends will enjoy! 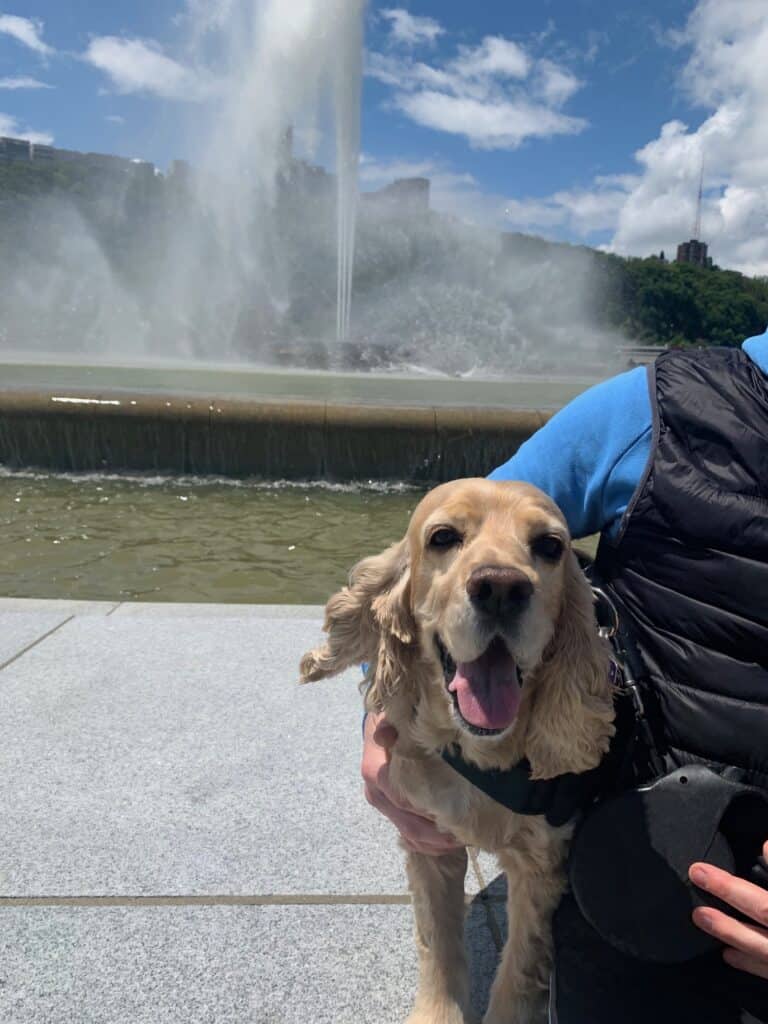 Our weekend RV season started out a little chilly. But this park would be a great visit this summer!

Have you tried chicken parm burgers? Easy peasy over the campfire!