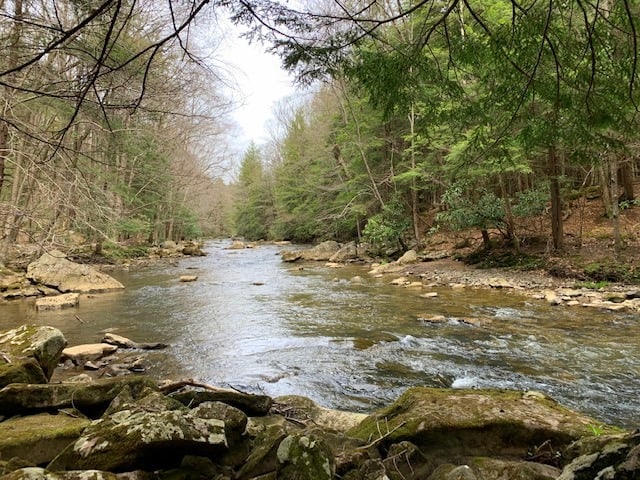 Laurel Hill State Park in Pennsylvania is centered around Laurel Lake, with options for camping, swimming, fishing, and hiking.

Laurel Hill State Park is just over an hour southeast of Pittsburgh, Pennsylvania, in the Laurel Highlands area of Somerset County.

While the park has a 4,500+ acre footprint, the surrounding parks and forests create an even larger wilderness area around Laurel Lake – a perfect place for kayaking and fishing.

The area of the park fell victim to the logging industry in the early 1900s, but was reforested in the mid- to late- 1930s. The Civilian Conservation Corps then played a huge role in constructing the park’s facilities – including structures for the picnic areas, around the lake, along the trails, and on the beach.

Laurel Hill became a state park in 1945, with the Laurel Hill Recreational Demonstration Area Historic District now being the biggest example of the CCC’s work in Pennsylvania.

Just before entering the Laurel Hill State Park Campground, you’ll find a Visitor Center – which includes a small camp supply and souvenir store (where I picked up a sticker!), along with public restrooms.

Our site was in the pet-friendly loop (of course) at #22 (starred below), right across from the bath and shower house. 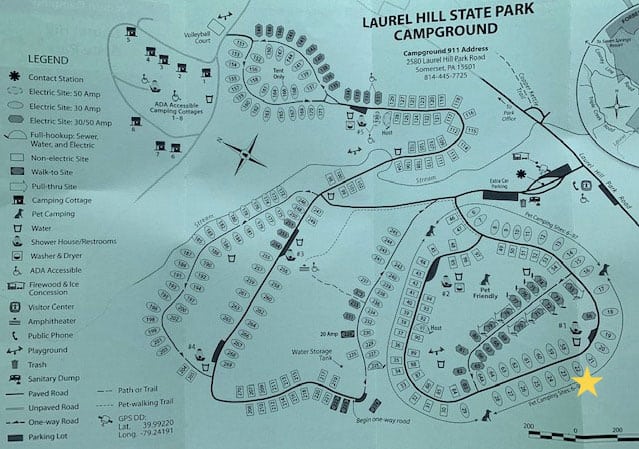 Site #22 was odd because the electric box was reallllly far from the parking pad, and the side of the RV that would usually face the road didn’t.

We finagled Axl Roads around the parking pad until he could reach the electric box. 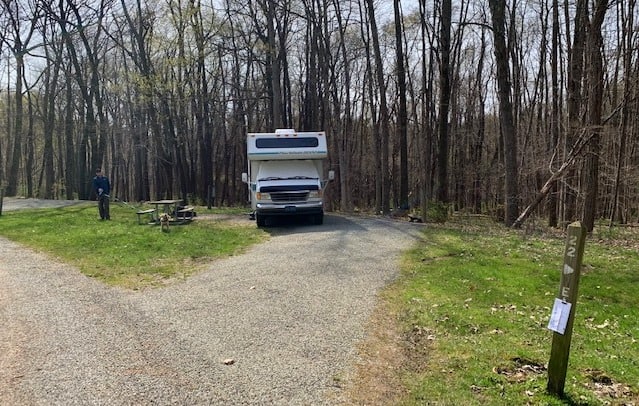 The bath and shower house were simple and clean, and I’m happy to report that the shower was scalding hot and water pressure was great!

The weekend we visited was quite chilly, and while the shower was hot, the bath house is not heated.

Plan to make quick, calculated moves when that water shuts off!

Maybe you’ve read our “Lessons Learned” from the end of the RV-weekend-camping season, but here’s a lesson we learned at the beginning of this season: 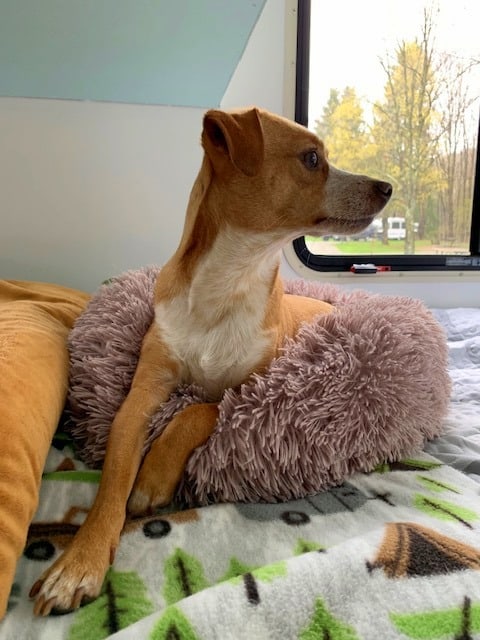 As soon as we got home, I ordered her poofy bed in the next size up, so she should be good to go for the next trip!

Laurel Hill State Park has almost 15 miles of hiking trails – some of which are used for snowmobiling in the winter, so they are wider than typical trails.

We found all of the trails to be an easy walk from the campground and well-marked. 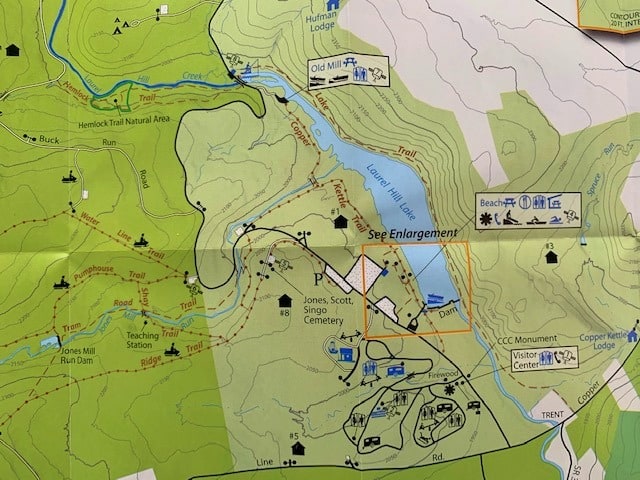 Because Russ had recent knee surgery (dang meniscus!) and Franklin pulled a muscle the same week, they opted to do the first two trails. Hazel and I then planned to break off and finish another.

From the campground, Copper Kettle Trail is a flat, well-tread, wide trail along Laurel Lake. You can break off for a closer look at the dam, and the day we hiked, there were lots of people fishing. 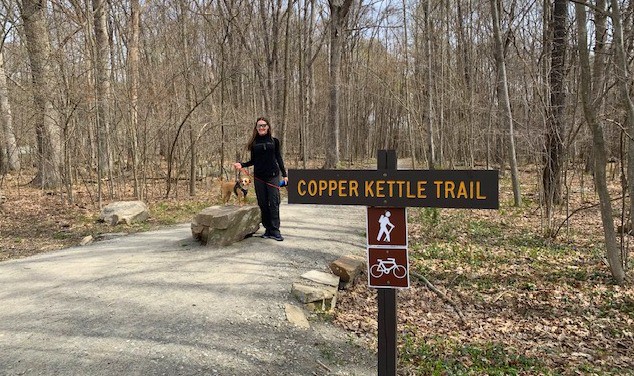 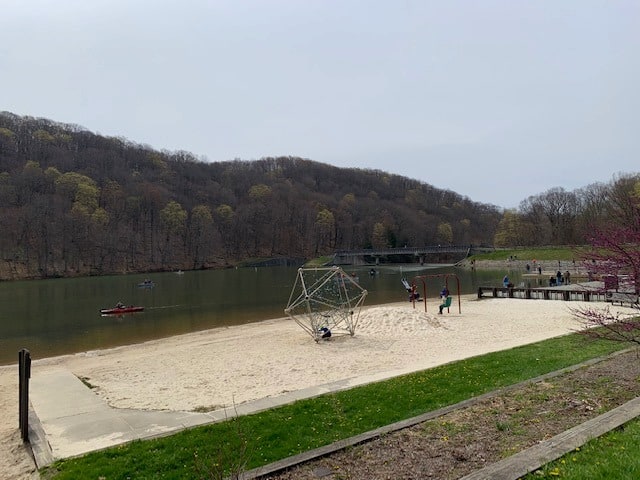 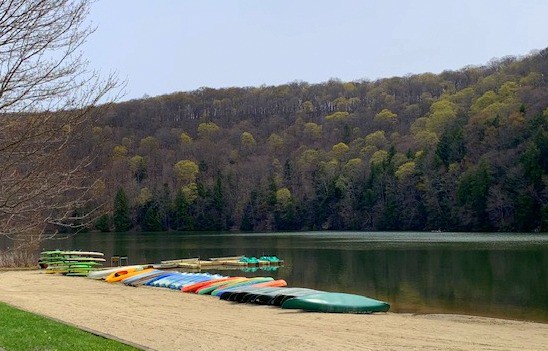 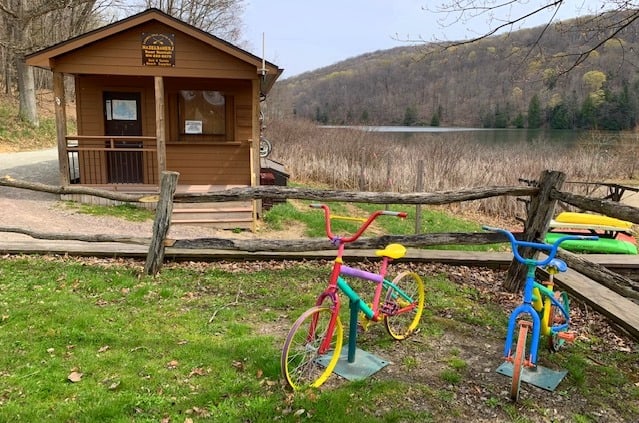 A little over a mile later at the end of Copper Kettle Trail, you can head across the street to see a popular part of the park – Hemlock Trail and the Hemlock Trail Natural Area.

Hemlock Trail is also just over a mile long with a few ups and downs, but nothing too serious – plus the scenery is magnificent! 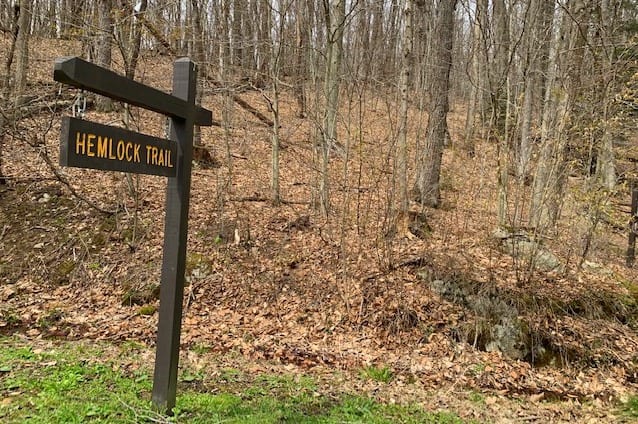 Hazel appreciated the footbridge onto the trail, and we found even more people fishing in the creek. 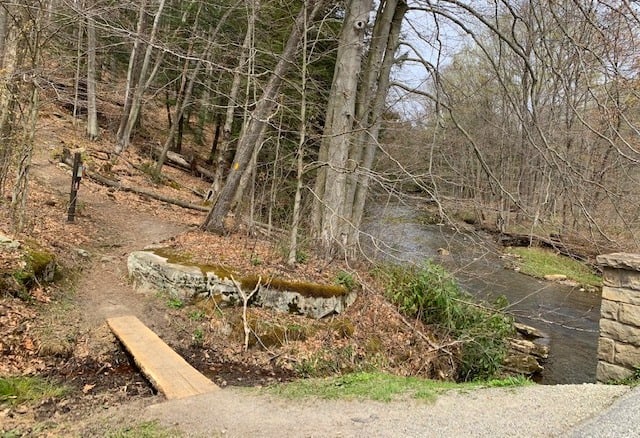 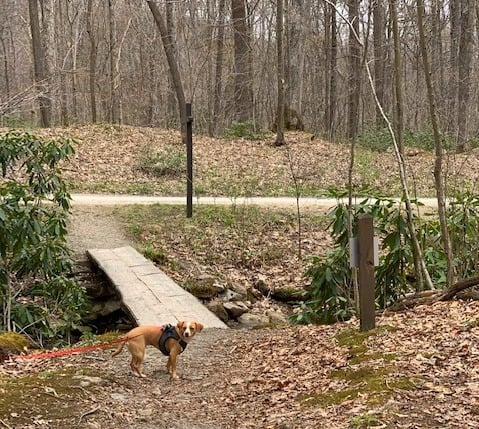 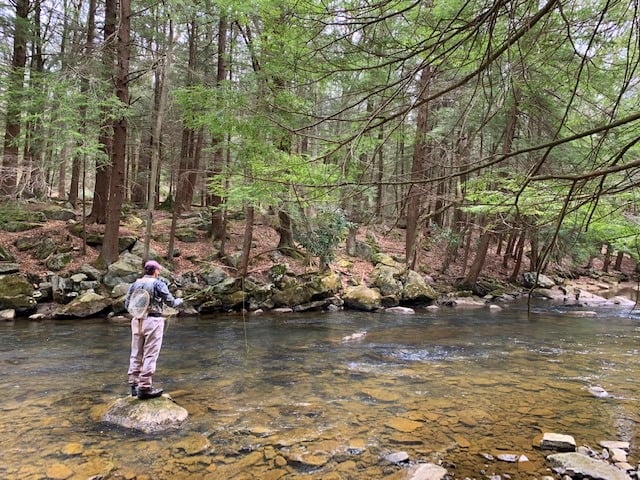 If you take the lower side of the loop to the right, you’ll be hiking along the creek at first.

You’ll come to the Hemlock Trail Natural Area, which is home to trees that are over 300 years old…and also creates a darker, more foresty part of the trail. 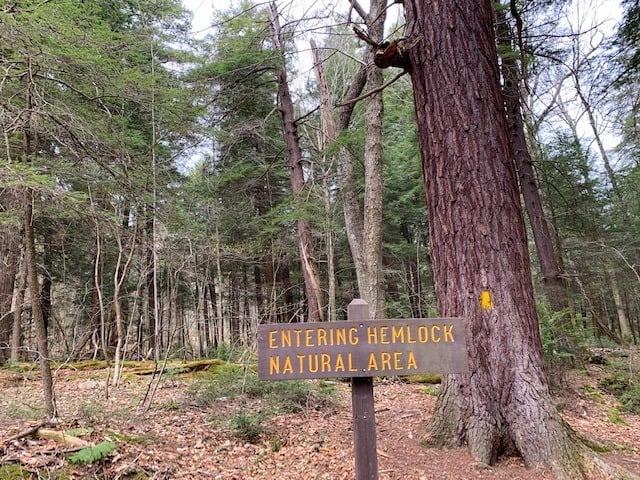 I did not say “deep, dark forest” … but you get the idea! 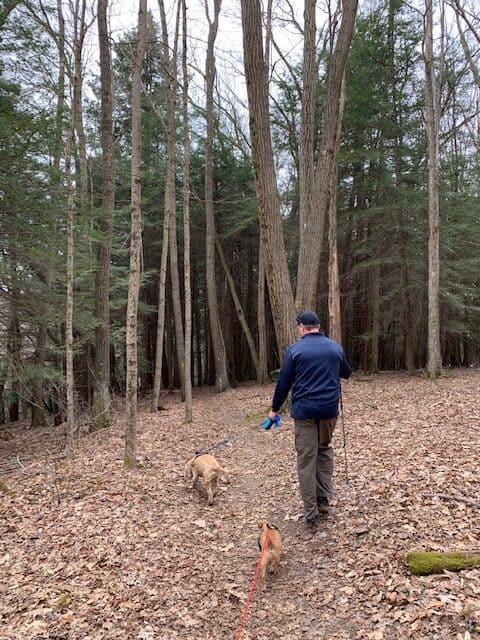 Then, you have the option of continuing to the end at a road and retracing back or creating the loop. If you choose the loop, you’ll be headed uphill for a bit before descending back to the footbridge where you started.

At that point in our hike, Russ and Franklin went back along Copper Kettle Trail to return to the campground. 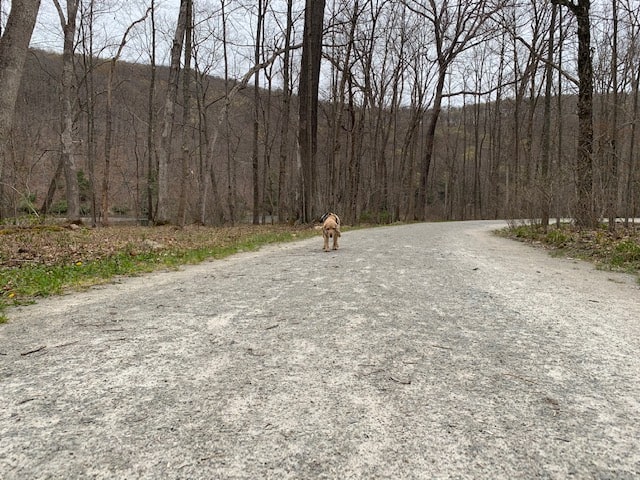 Hazel and I continued across the street from Hemlock Trail to do Lake Trail, a more difficult 1.75 mile path that runs alongside then high above Laurel Lake. 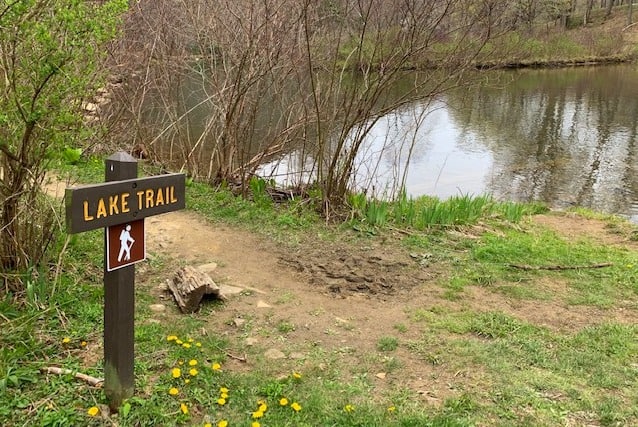 If you look real close, Russ took this pic of me and Hazel from across the lake – we are teeeeeny tiny! 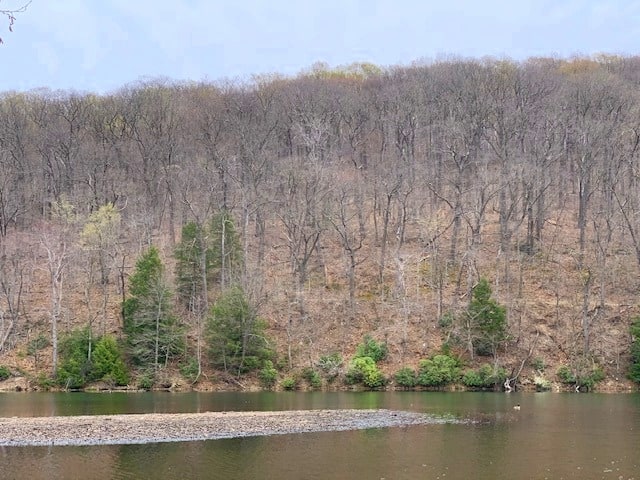 Lake Trail ends at a road, Copper Kettle Highway, where you can make a right, then another right to return to the campground.

On Sunday morning, we drove from the campground out County Line Road to the first right down a dirt road. We parked at the small lot about half a mile in to make the hike to see Jones Mill Run Dam.

That hike is a short half-mile or so from the parking area, and you’ll end up on the opposite side of the falls from the viewing area – but you’ll still have a great view! 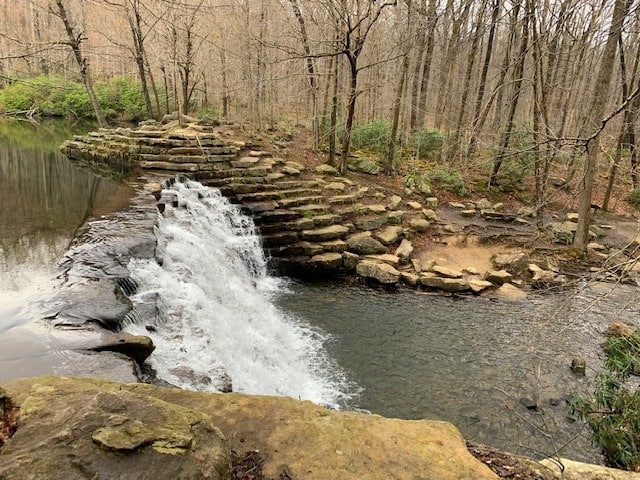 Here’s an outline of the trails we hiked in yellow and green -plus the orange line that included some driving along County Line Road. 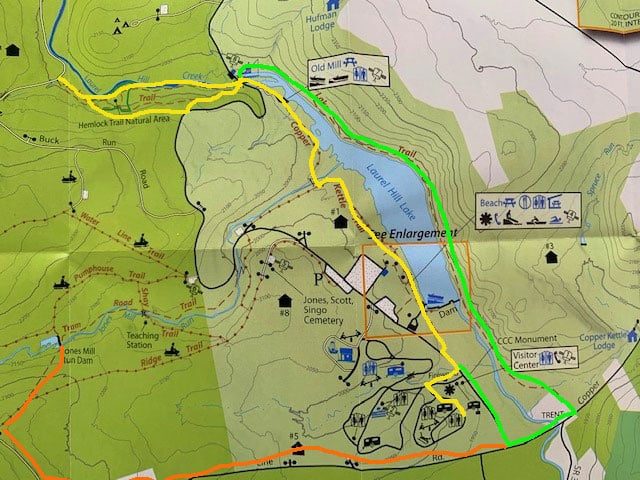 Spring was springing during our visit, with a lot of buds budding – but still a lot of browns to be seen. 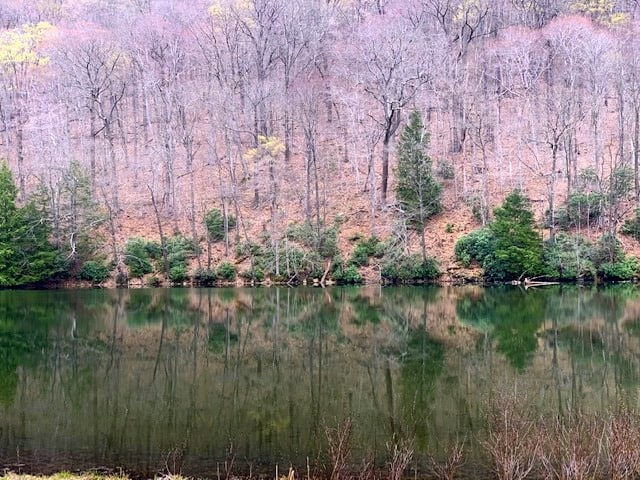 While we didn’t see any mushrooms I did catch a few wildflowers coming alive. 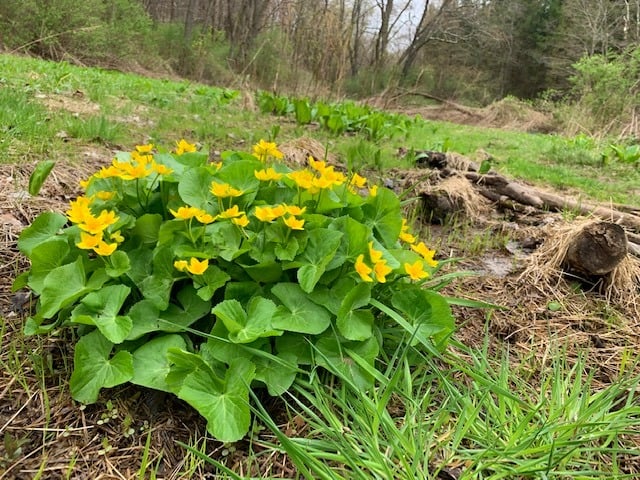 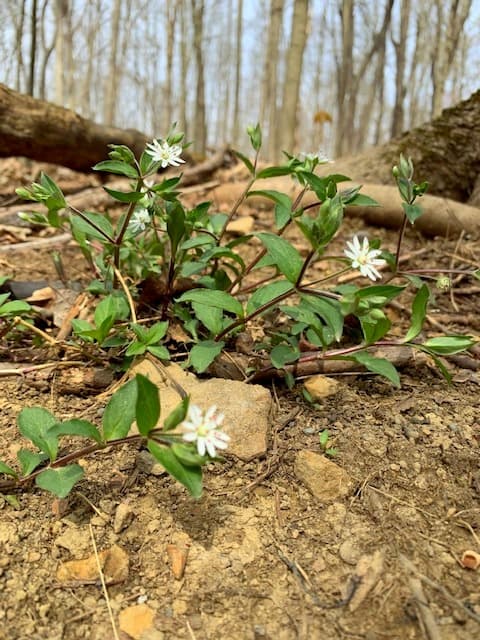 Hazel and I saw a whitetail deer at the end of Lake Trail, and I caught this slug on our way to the dam. 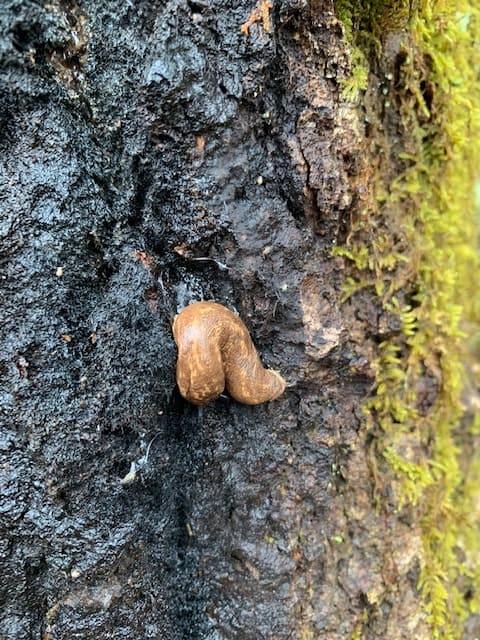 Laurel Hill State Park definitely has enough going on to keep you busy for an entire camping weekend – and that was from our experience during a chilly, early-spring visit. The summer possibilities are endless!

Laurel Hill is also near a few other state parks you should consider visiting. Read our Trip Reports on Kooser State Park and Ohiopyle State Park to see if they are worth a stop! 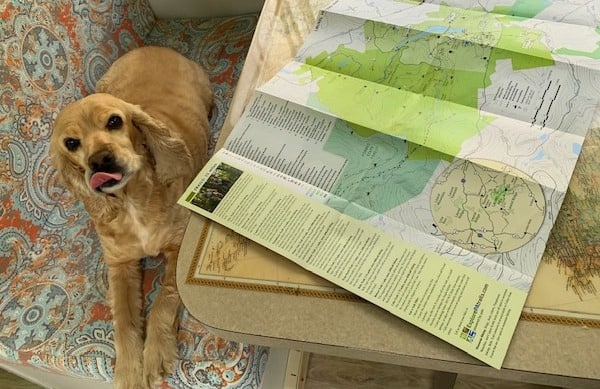 You always need something to read on a camping weekend. Here are a few suggestions.

Keeping an older RV on the road isn’t easy! Check out our Makeover Quick Takes and Costs of Owning and Older RV posts.