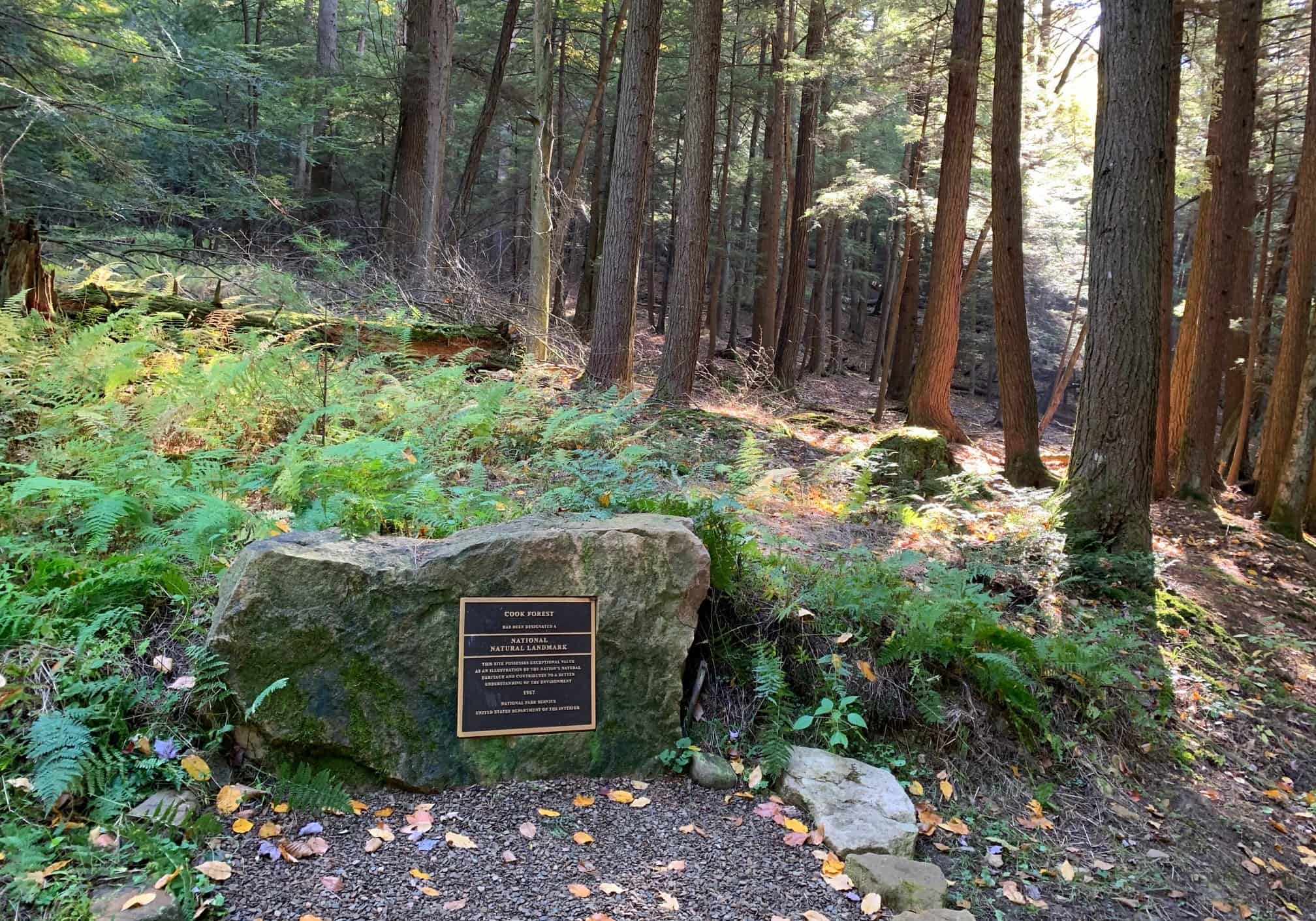 Cook Forest State Park is located in western Pennsylvania just north of I-80, a few hours north-northeast of Pittsburgh.

The park is made up of 8,500 acres of old-growth forest, and the Clarion River winds along the southern edge of it. It has close to 50 miles of hiking trails, plus fishing, kayaking, and horseback riding opportunities.

The area of Cook Forest State Park was purchased from A. Cook Sons Company in 1927, after a long logging history- headed first by John Cook and later by his son, Anthony. The forest became a site of a Civilian Conservation Corps camp, and they contributed to cabin and facility construction in the park.

The old-growth forests in Cook Forest were eventually safeguarded by a National Natural Landmark designation in 1967.

Cook Forest State Park has 210 sites – including areas with electric, water, and even sewage. About half the sites are pet-friendly.

We stayed at the starred site below, #114. It is located across from the bathroom and next to the Campground Host. 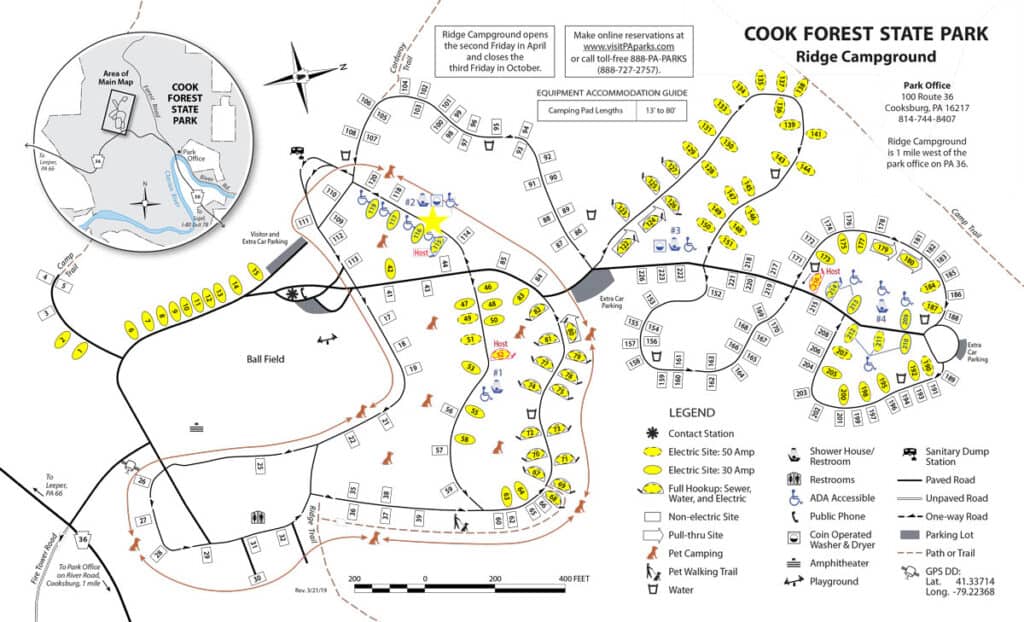 We booked late in the summer, so we didn’t have a lot of site options. Site #114 isn’t private or secluded, and there is no barrier between the back of that site and the sites or road behind it.

Some trees and bushes would go a long way to improving this site. We heard most of the traffic and saw headlights coming in and out of the campground during our stay.

One positive for the campground is the bath and shower house. While it is not the cleanest or most modern, it does have extremely hot water, amazing water pressure, and NO timer buttons!

The best place to buy firewood is at the campground itself to avoid spreading any insects or disease, but we noticed a few times the campground firewood area was empty. You may want to purchase some firewood close to the park before you arrive just in case!

Cook Forest State Park contains almost 50 miles of hiking trails, including the Forest Cathedral Natural Area. The North Country Trail, the longest in the National Trails System, also rolls right through the park as it makes its way from North Dakota to Vermont for a total of 4,600 miles!

For both hikes we completed, we started from the Campground. In the morning, we used Ridge Trail to get to the Cathedral area and later that day, we took Camp and Corduroy Trails to do the loops to the west of the campground. 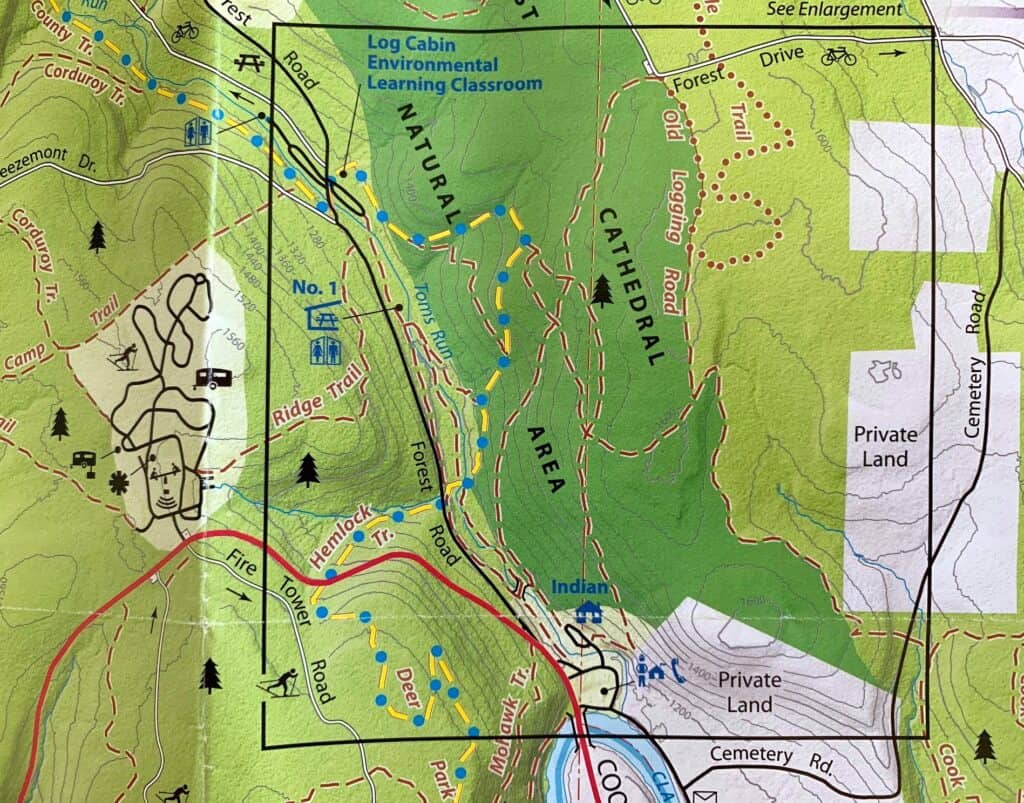 Ridge Trail leaving the campground is nice downhill descent – which only means you’d better save some energy to get back up at the end of the hike!

Once you cross the road at the bottom of the trail, you can head to the right of the Log Cabin Environmental Learning Classroom to get started on the North Country Trail heading into the Cathedral area.

There’s lot to see at the beginning of this trail.

After all the turmoil the past few years, we enjoyed being met by the Tree of Peace at the start of this hike. 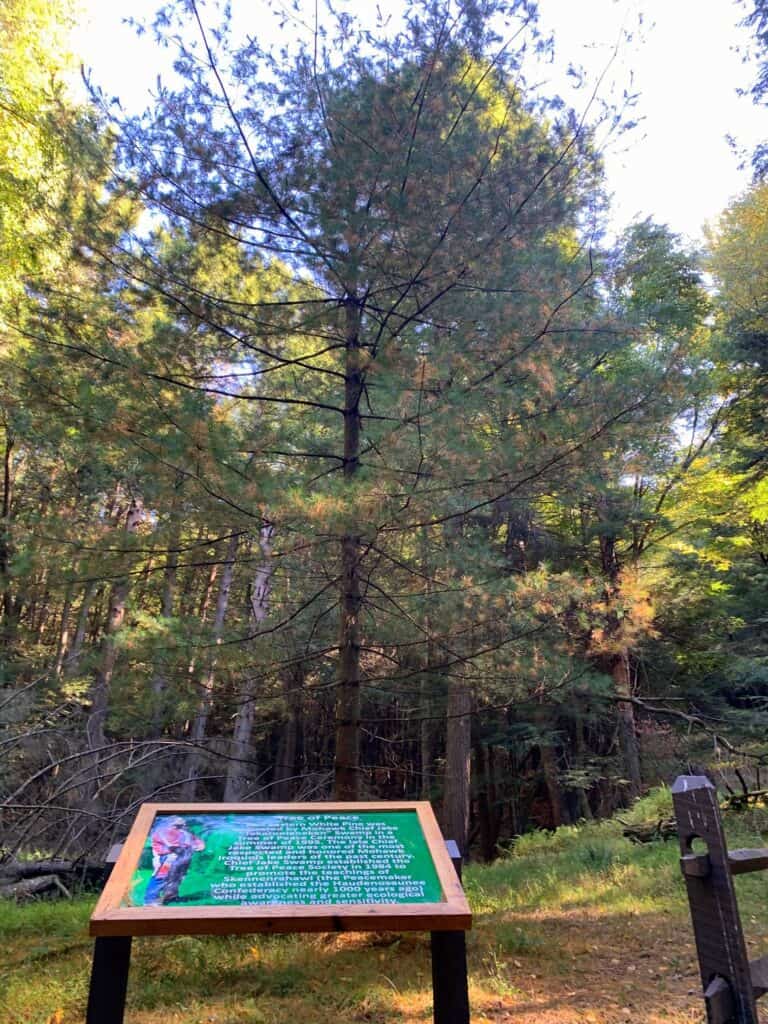 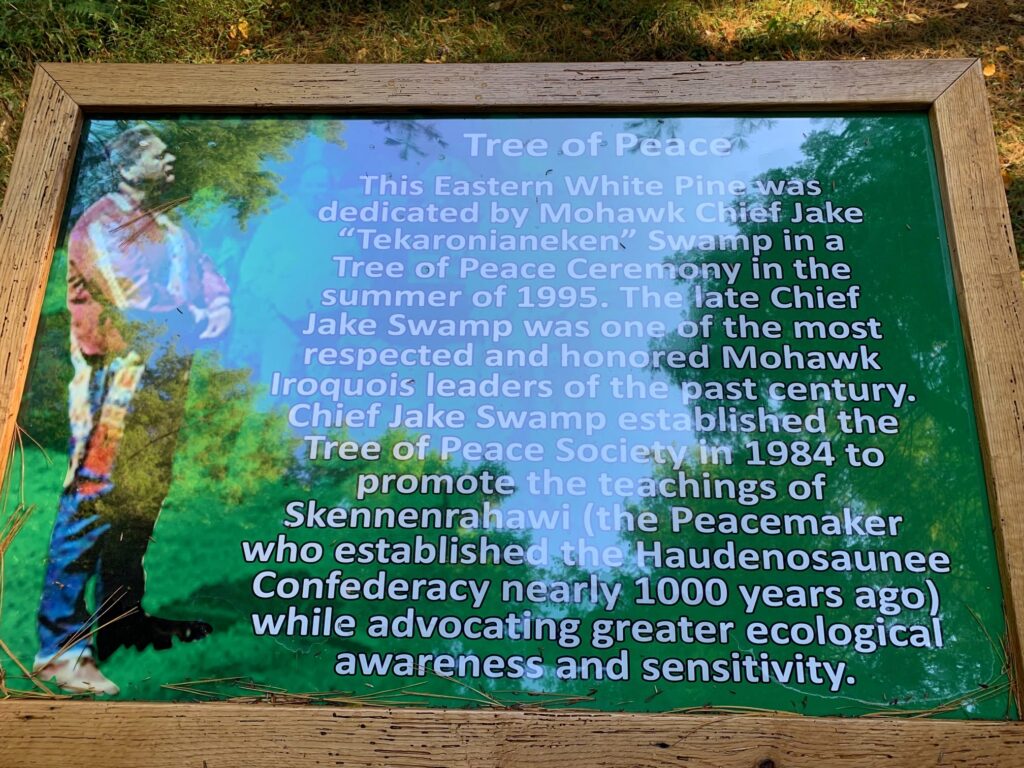 Up next just a short walk away are the Cook Forest Stone and Memorial Fountain. 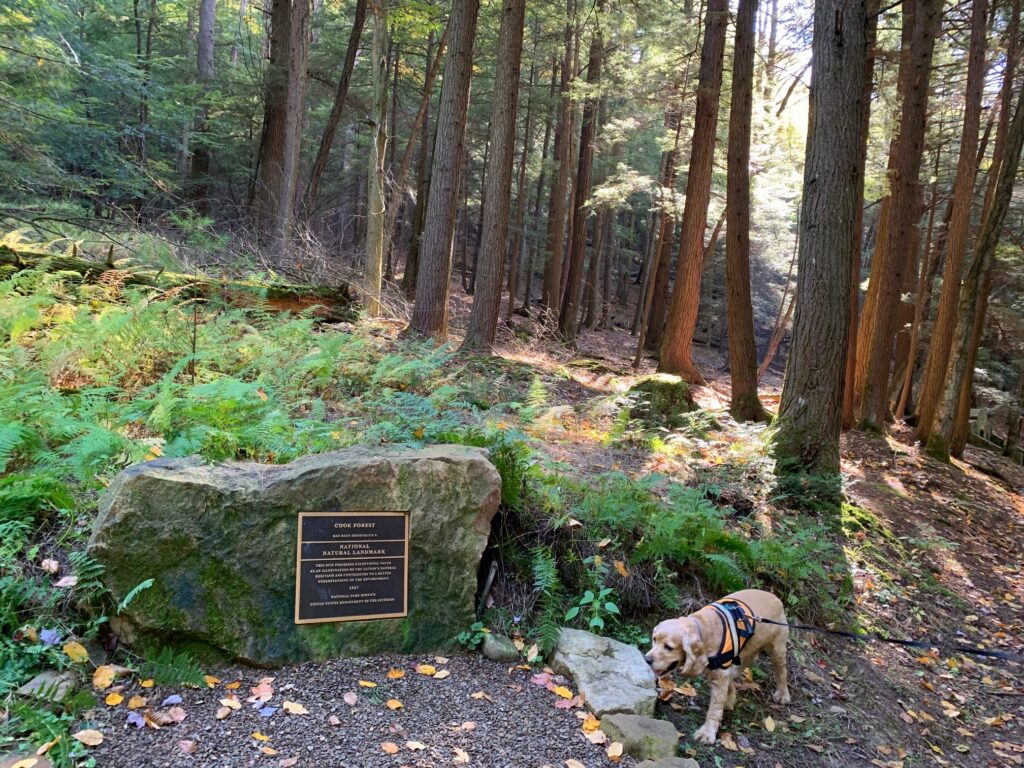 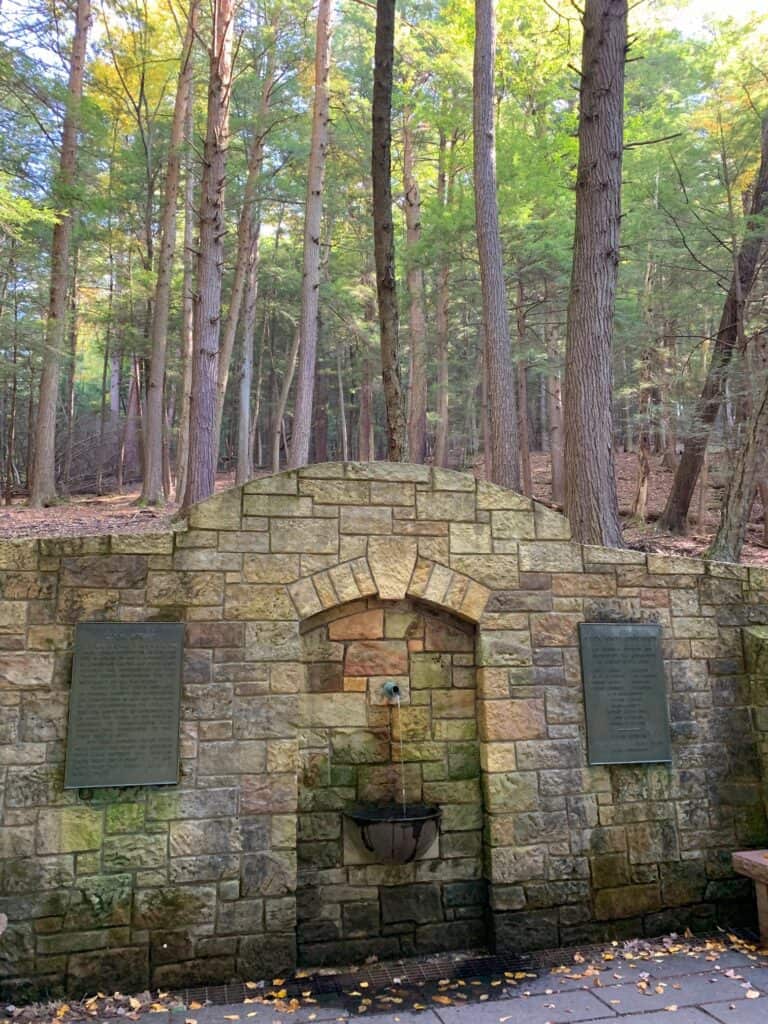 One thing the trails through the Cathedral section have in common are clear, wide paths – something you can appreciate with two dogs who are constantly trying to walk next to each other! 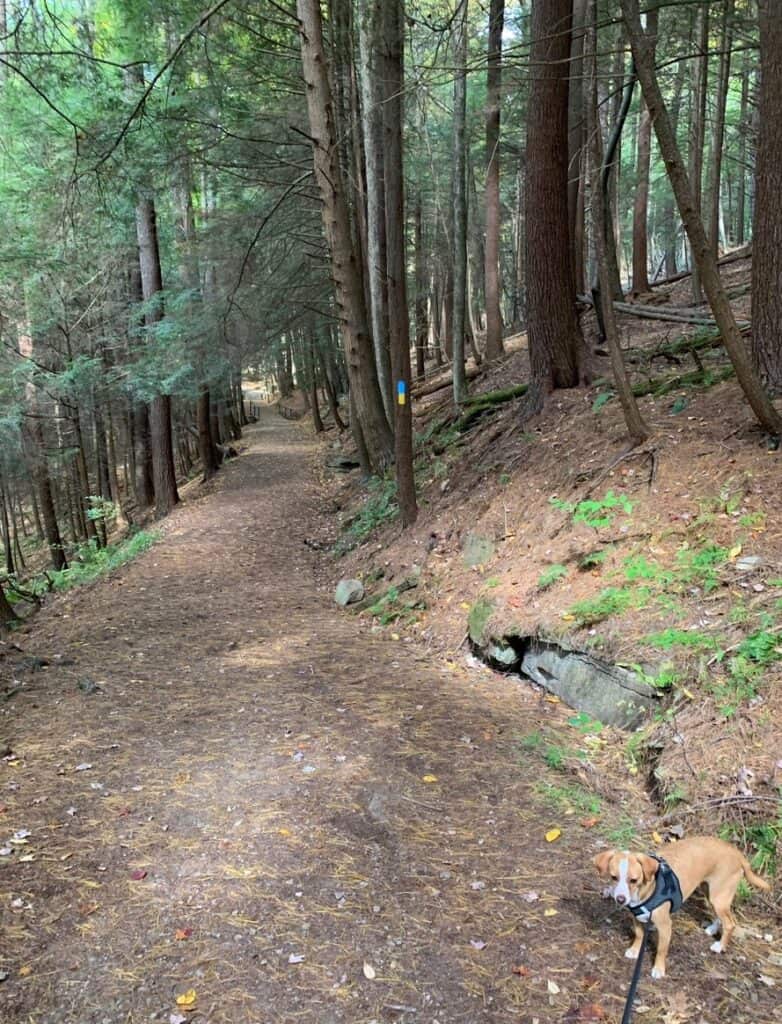 One thing Hazel does NOT approve of (but is clearly a park favorite for everyone else) is the swinging bridge along Toms Run and Birch Trail.

She was very concerned about the sway and stepped her little paws carefully over the wider breaks in the planks. 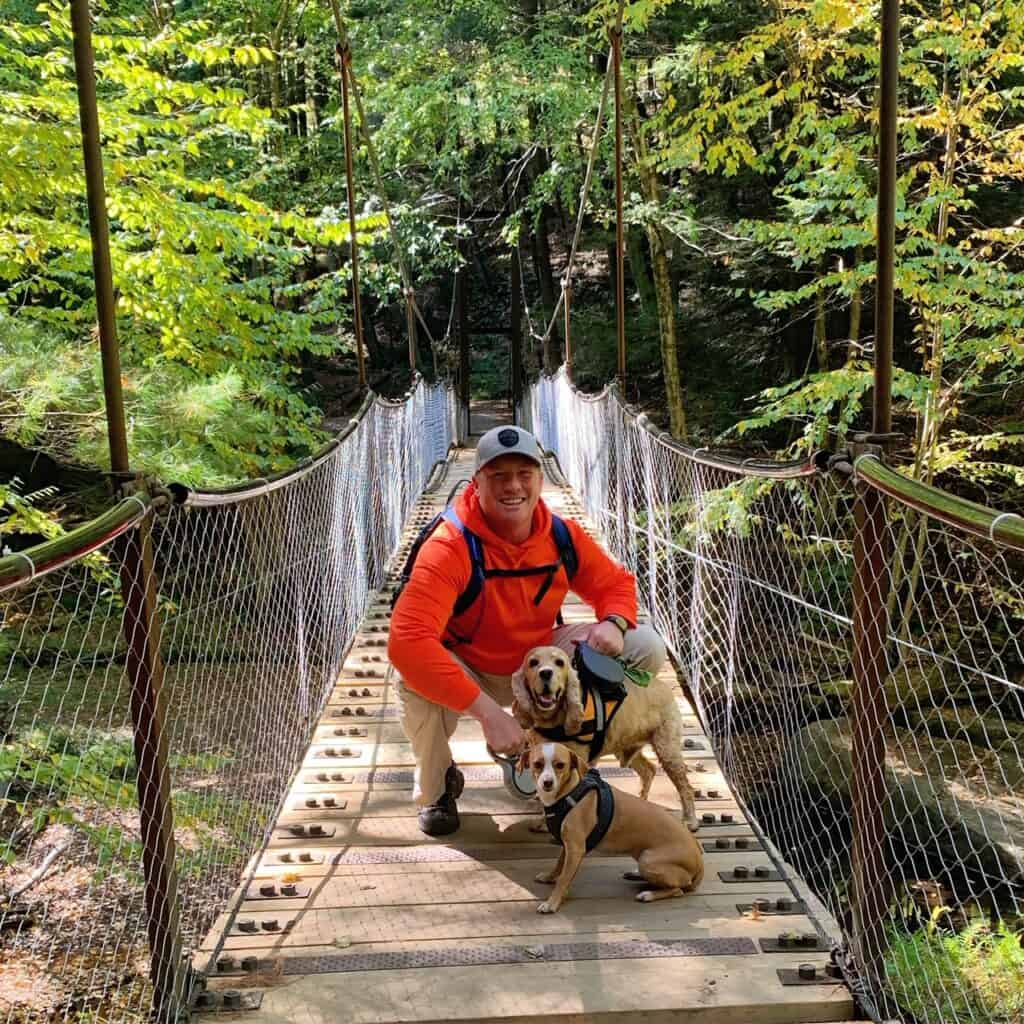 Winding along the connected trails in the Cathedral, we were able to create a 7-8-mile hike, including the to-and-from on Ridge Trail.

Later that day, we did a relatively flat 2-mile loop leaving the campground on Corduroy and combining with Camp Trail.

We found the trails busy at their entrances, but relatively quiet once you were about half-mile into the woods.

While we saw several deer during our visit, the only other proof of wildlife – and we aren’t even sure what kind – was this small pile of poo. 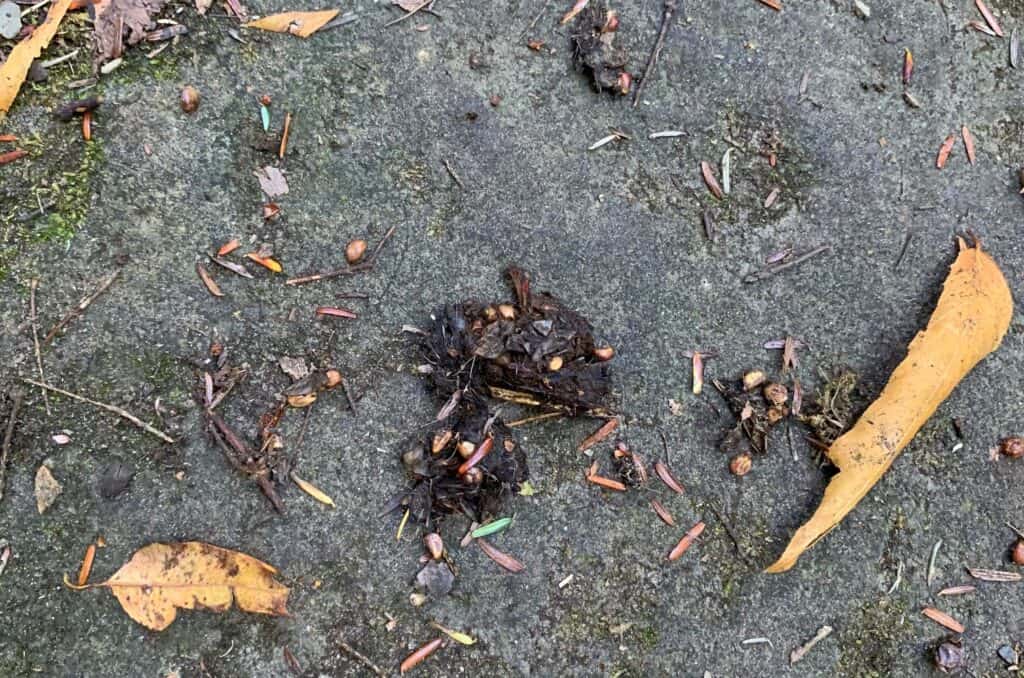 If this poo was bigger, I’d say it looked like a bear’s, but these were small droppings. 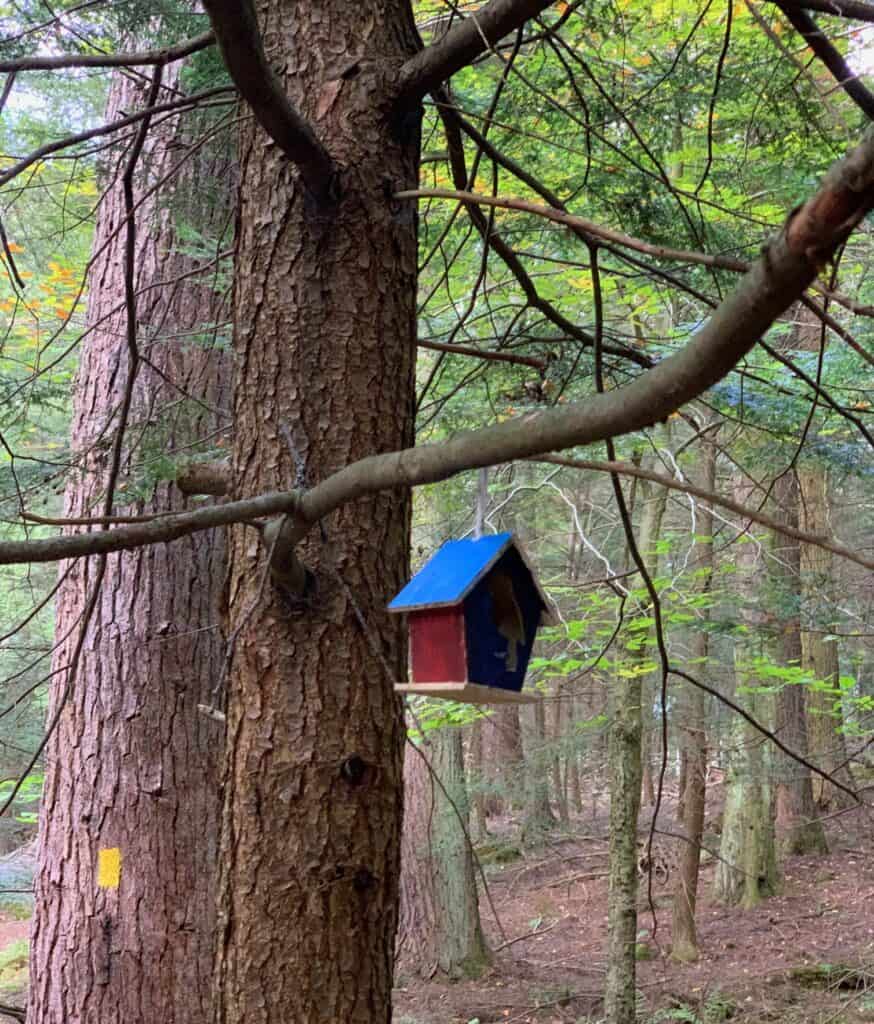 Since the weather has been getting colder, I wasn’t sure how the mushroom spotting would go – but we still saw quite a variety! 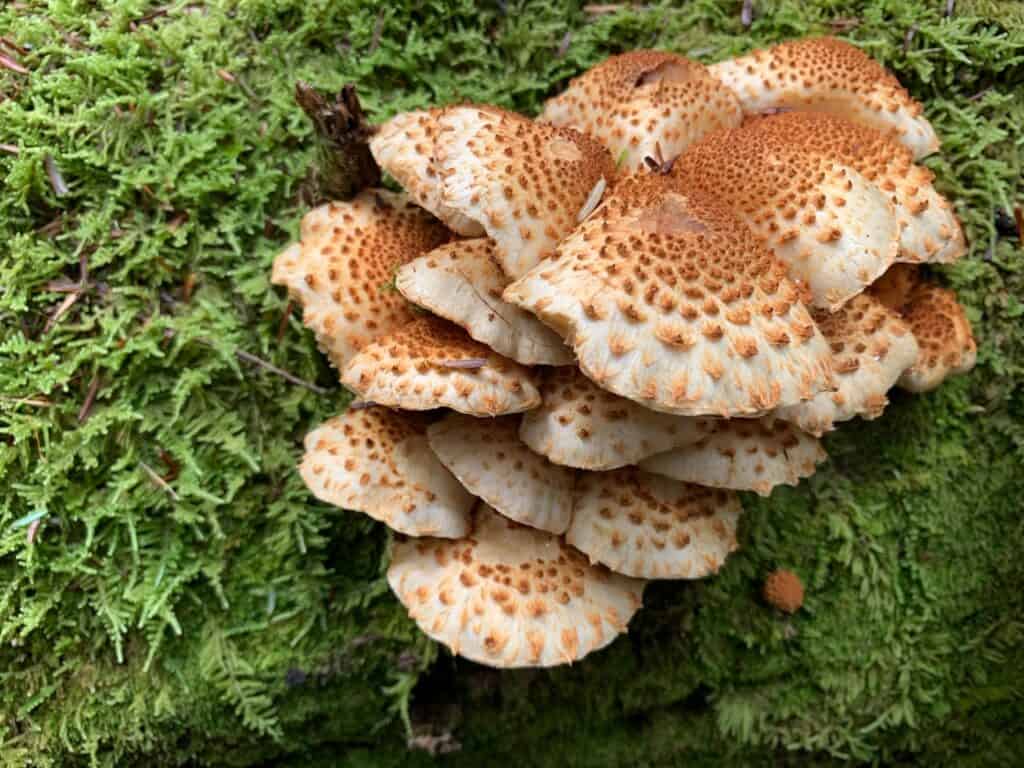 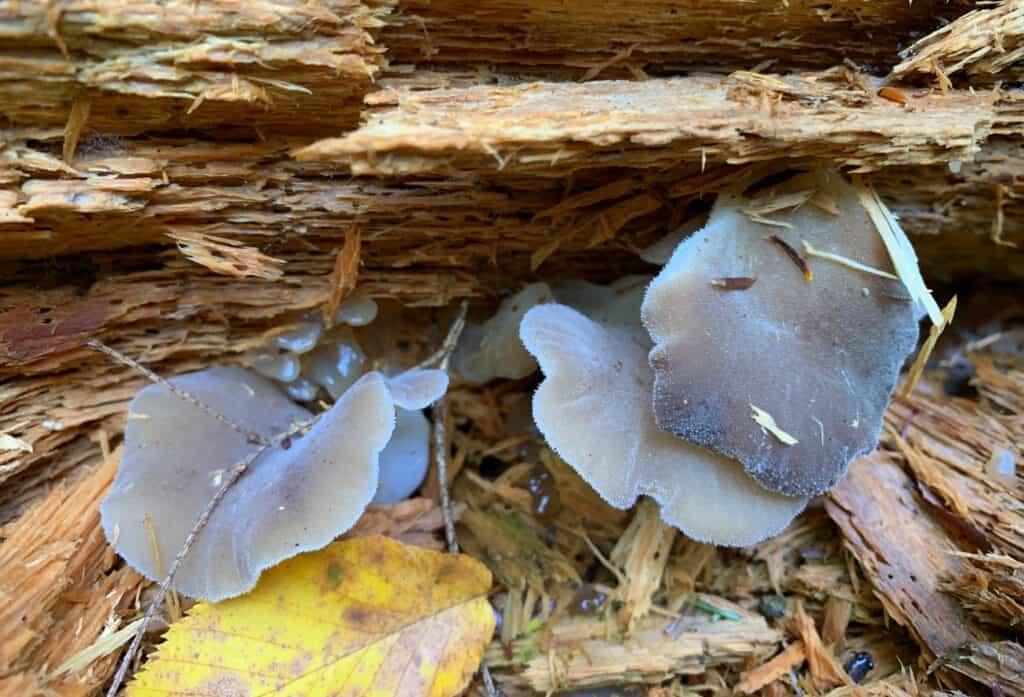 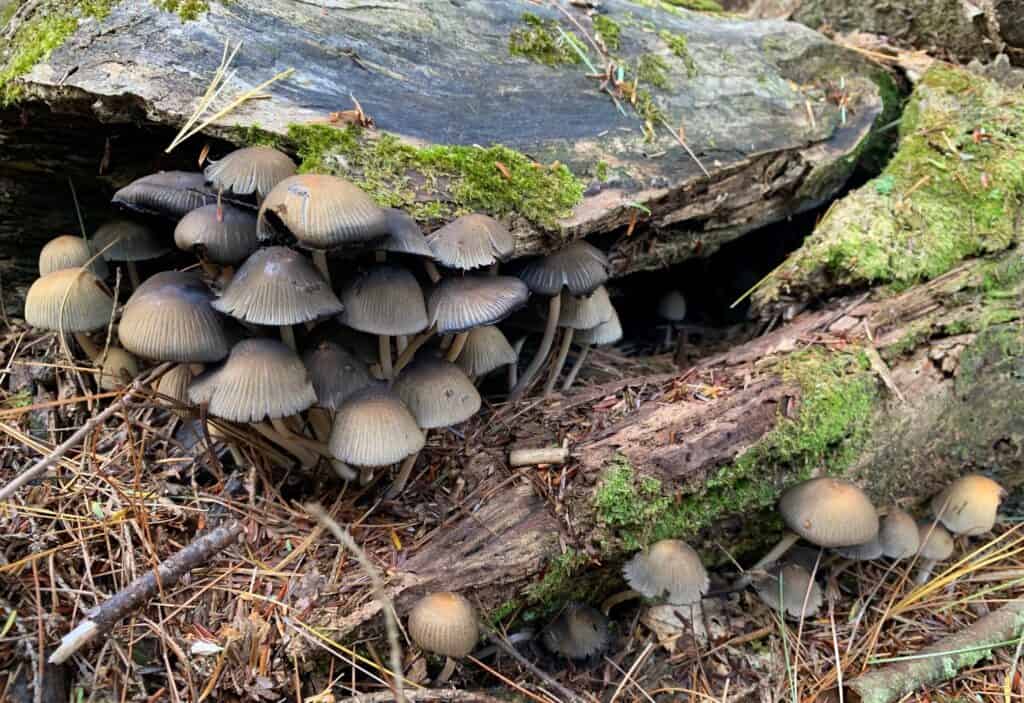 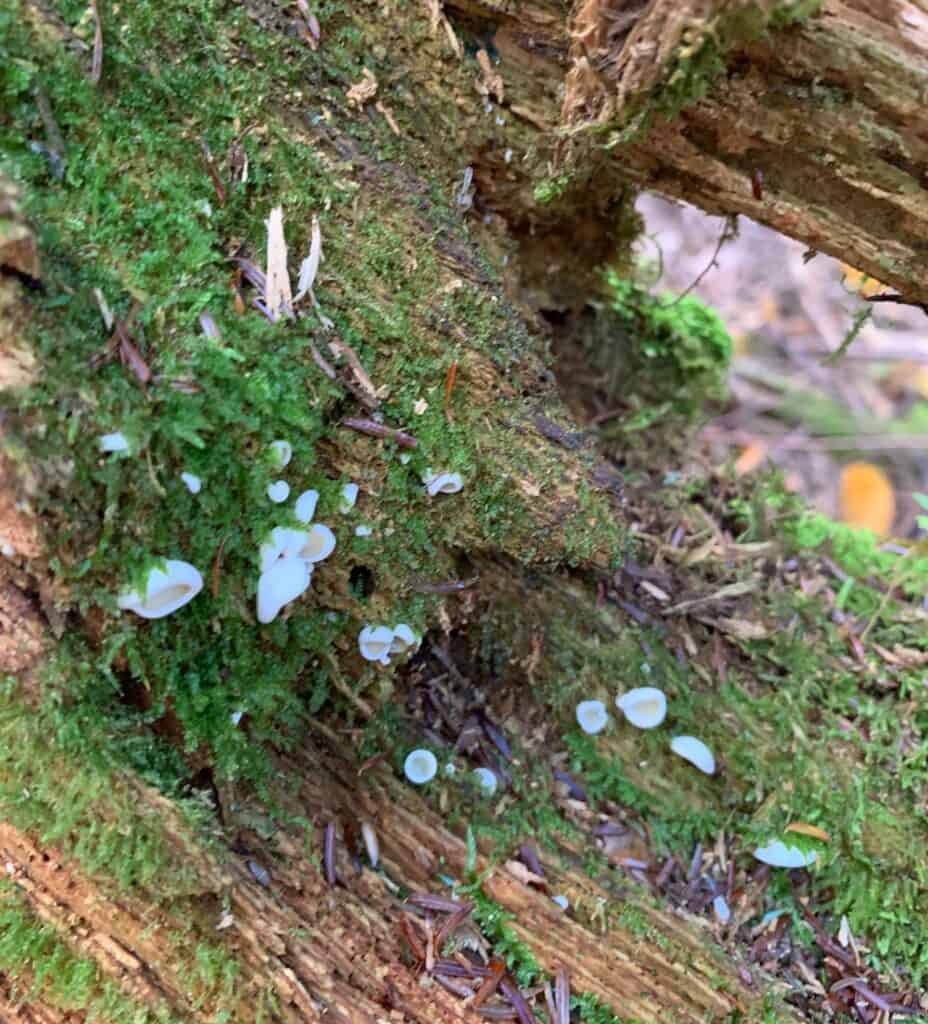 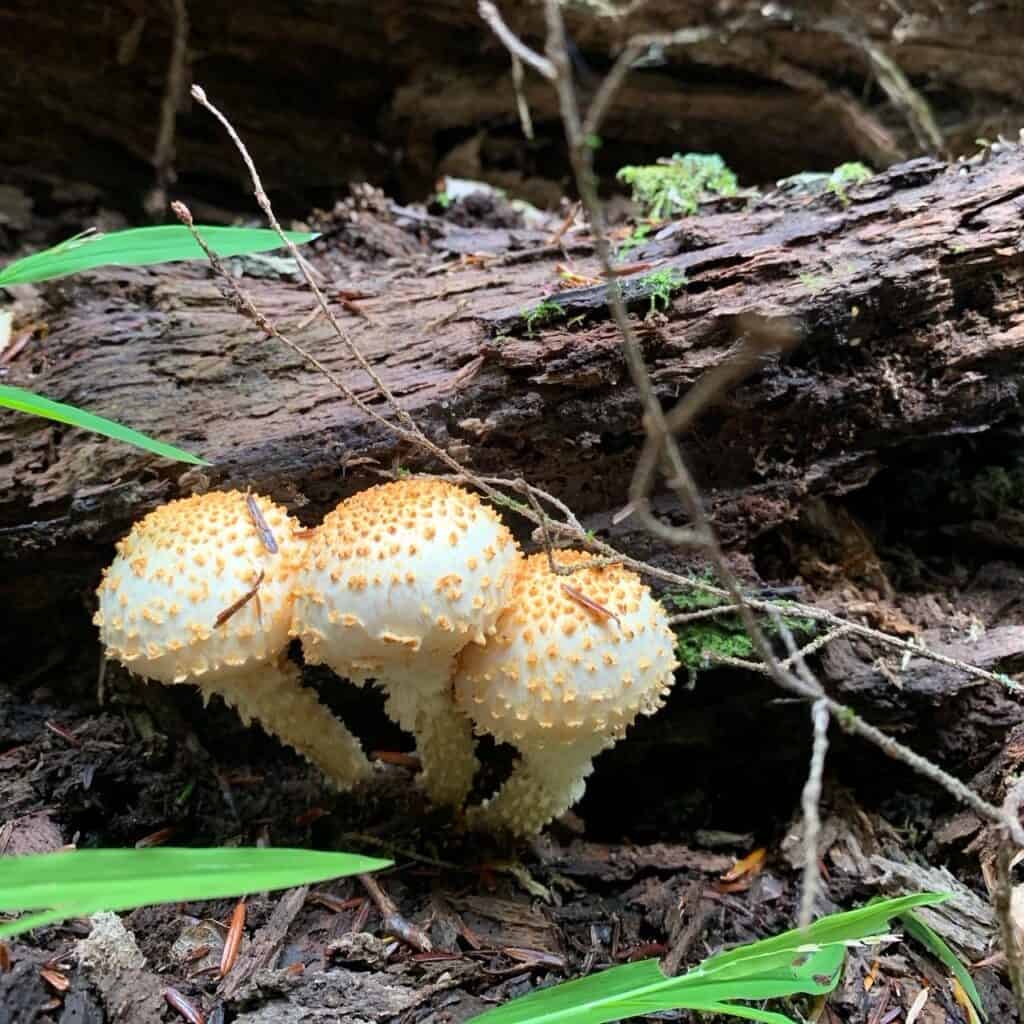 Cook Forest State Park Campground provides a good home base for the trail system, and the park has some tremendously-sized hemlocks and white pines that are wonderful to hike through.

The trails are wide enough to share easily, even with a few four-legged friends! 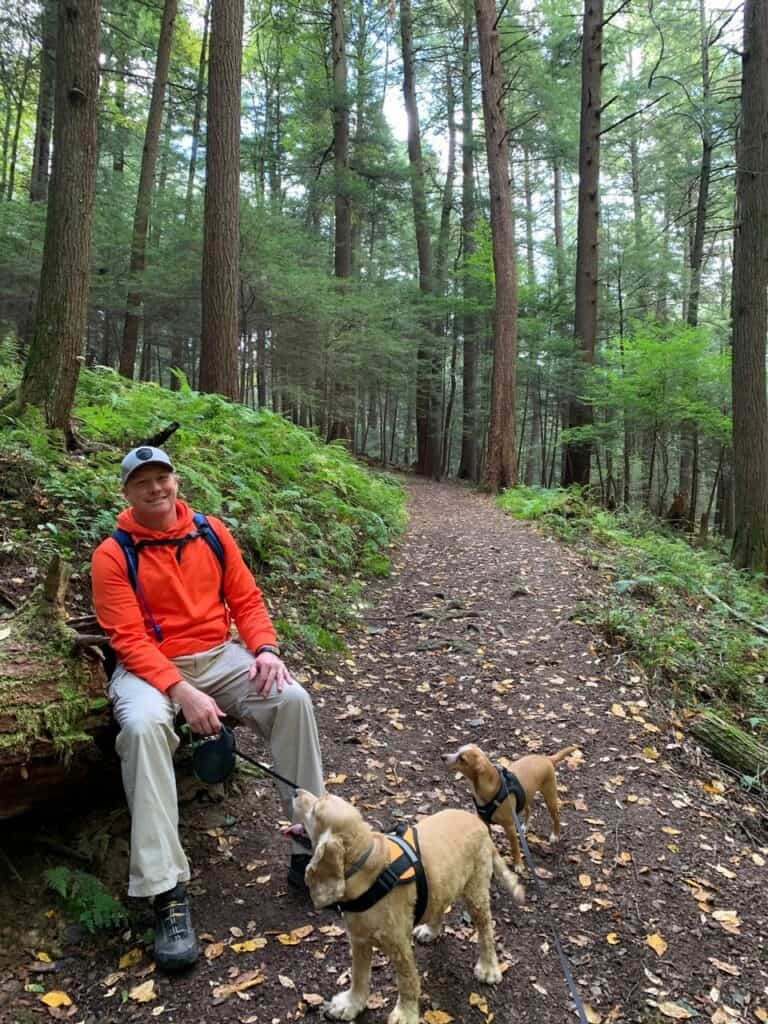 If you run out of trails to hike in Cook Forest State Park, Clear Creek State Park is a short drive away.

Ever wonder how much repairs cost on an older RV? We’re always willing to tell you!